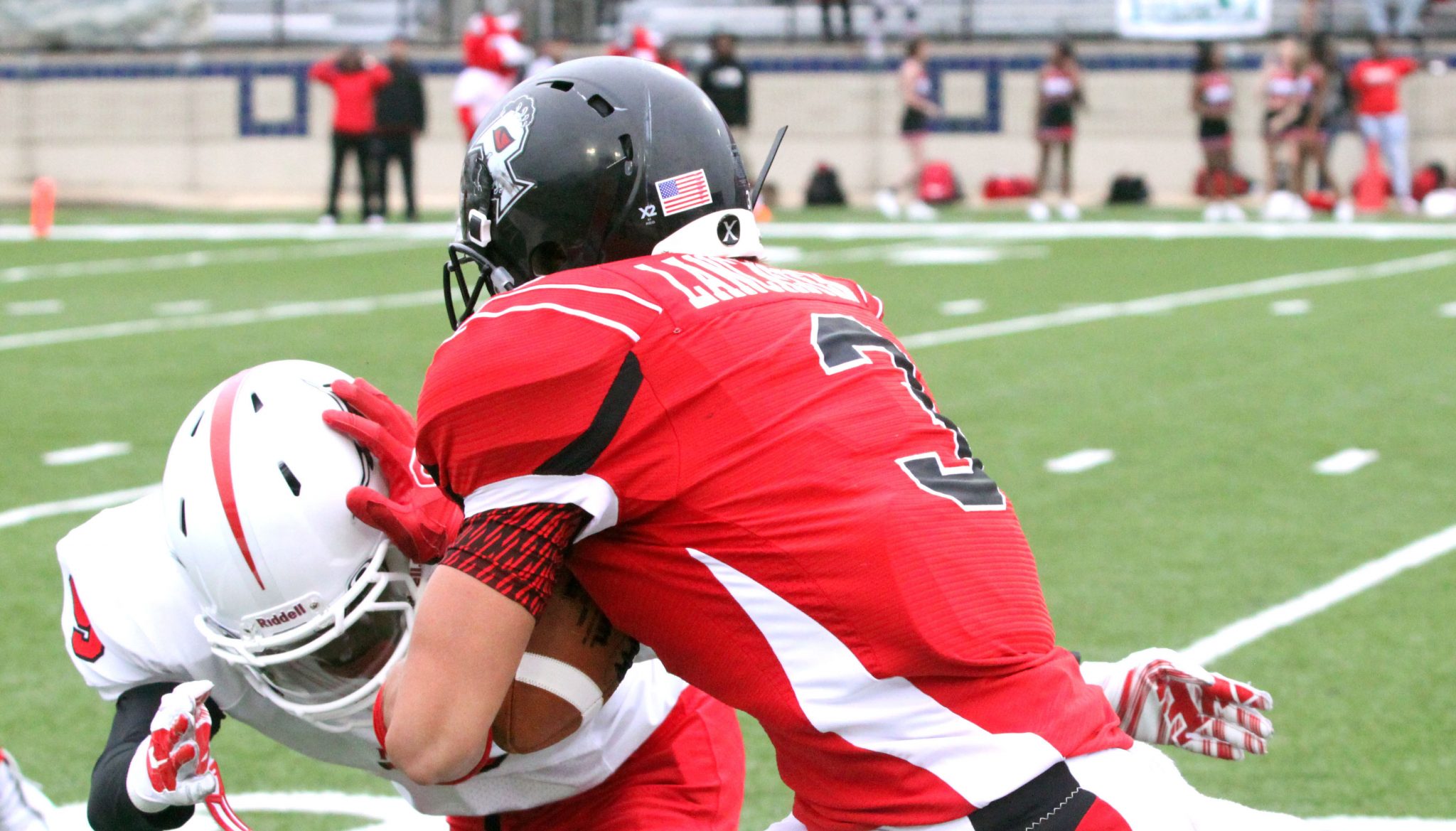 The Parkway Panthers rebounded from last week’s lost to Calvary Baptist with a 45-21 rout of the Marshall, Texas, Mavericks Saturday in the Landers Battle on the Border at Independence Stadium.

After turning the ball over seven times against Calvary, the Panthers turned it over only twice against Marshall. The last one was a meaningless fumble late in the game.

One the other one, Marshall’s Malon Mitchell made a nice play on a screen pass, intercepting the ball and returning it for a touchdown to give the Mavericks a short-lived 7-6 lead in the first quarter.

The game was basically over at halftime as Parkway built a 33-7 lead. The Panthers improved to 1-1, and the Mavericks dropped to 2-1.

“We’re very happy with the effort and the outcome,” Parkway coach David Feaster said. “We felt like Marshall’s a good football team. The one thing I asked the players was to really be physical and be tough this game because i felt like Marshall had a size advantage on us and I thought they played usually pretty physical and our players responded to that very well.

“The defense was very physical and the offense was, too. We had some knockdown blocks and we had (William) “Boo” McKnight running over people, running the football. A lot of times we get caught up in the finesse of the game. We think we’ve got a great passing game and a finesse running game and all that other stuff. But it’s nice too when we can kind of play smashmouth, and really it’s important for our defense to play like that.”

Parkway junior quarterback Keondre Wudtee, who was responsible for six turnovers against Calvary, scored on two 1-yard runs and and threw a 62-yard touchdown pass to William McKnight. Wudtee completed 15 of 18 passes for 289 yards.

“The Calvary loss was tough on all of us but if you go back and look at the film, Wudtee really made some great plays against Calvary,” Feaster said. “He showed what he’s capable of in that game as well as today. I still don’t think yet you’ve seen how good we’re capable of being as far as being able to move the ball down the field and all that but we’re getting pretty close.”

McKnight had a huge game, scoring four touchdowns. He rushed seven times for 79 yards and caught three passes for 91 yards. McKnight’s scoring runs covered 25, 28 and 5 yards. One the first one, he broke several tackles while still managing to tightrope down the sidelines.

The Panthers rolled up 252 yards on the ground. Demetrius McAtee, who scored on an 11-yard run, gained 66 yards on seven carries. Robert McKnight had just one carry but it went for 51 yards. Wudtee rushed for 34 yards and Maleck Zeidan 27.

Except for a few lapses in the meaningless second half, the Parkway defense played well.

CJ Morgan went high to intercept a pass to stop a Marshall threat. Lineman Kyle Still got a sack on fourth down. Defensive back Hunter Huckaby was in on 16 tackles and Still was in on 10. Juwon Johnson was in on nine,. Morgan, Dante Williams and Ryan Black were all in on eight tackles, and Lloyd Cole was in on seven.