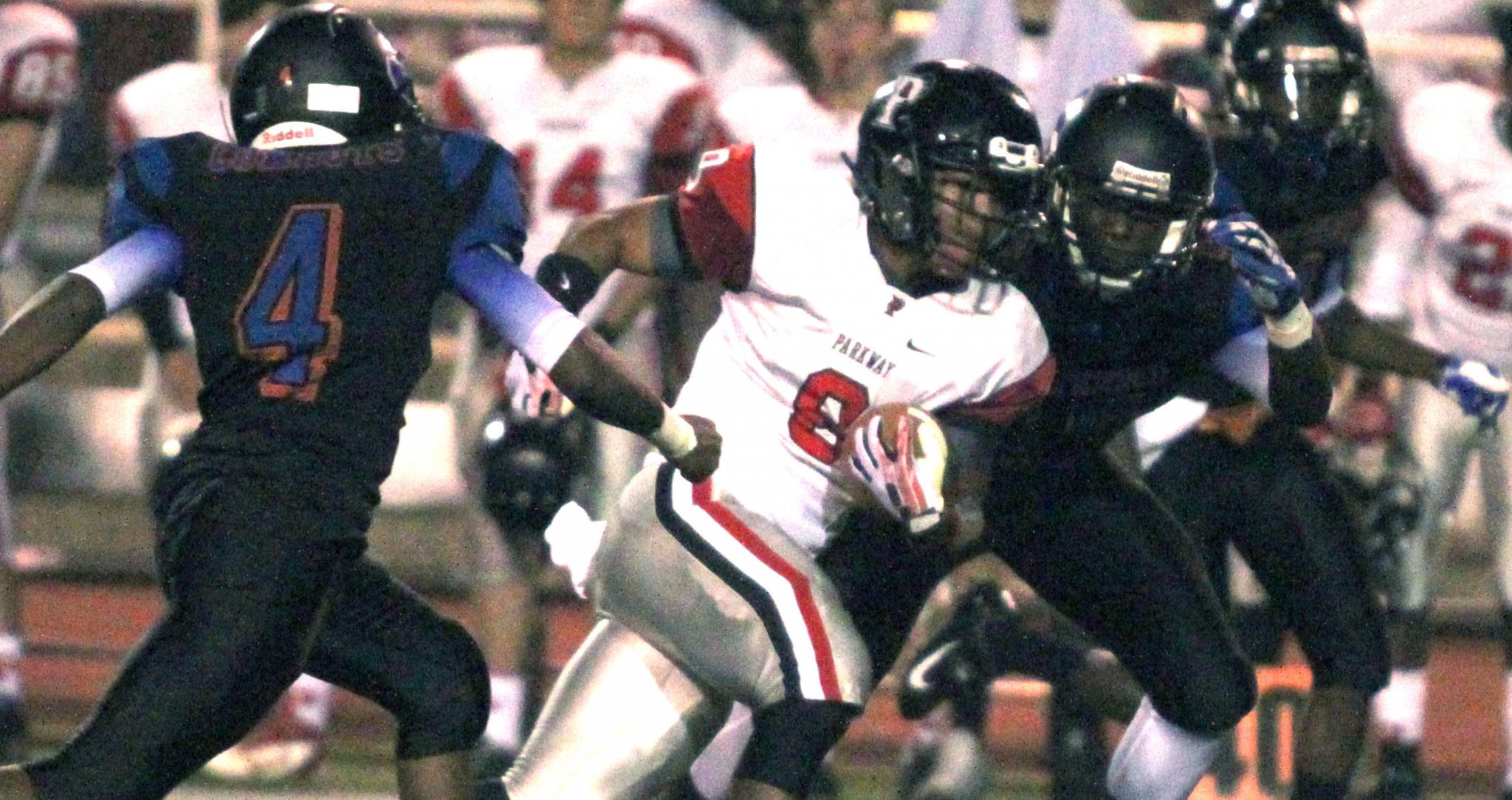 After a scoreless first quarter, the Parkway Panthers erupted for three touchdowns in the second en route to a 34-0 victory over the Southwood Cowboys Thursday night at Lee Hedges Stadium.

Parkway got off to a slow start. The Panthers threw an interception on the first play of the game and managed just one first down on their second possession.

Southwood was also able to move the ball on the ground early in the game.

“if anybody questions whether we were ready to play right there at the beginning they’re underestimating Southwood,” Parkway coach David Feaster said. “Give Southwood credit. I thought they played hard all night long. Even though we played well and made the plays nothing was ever easy. It wasn’t easy to stop them and it wasn’t easy to score. We were just able to eventually do it.”

Parkway finally got it going late in the first quarter after forcing an incomplete pass on fourth-and-19. The Panthers took over at the Southwood 46 and took five plays to score. Demetrius McAtee had runs of 21 and 12 yards. He scored on a 4-yard run on the first play of the second quarter.

Keondre Wudtee hit CJ Morgan for 11 yards and Jared Lancaster had a 9-yard run in the drive.

Parkway defensive lineman Kyle Still came up with a big play on Southwood’s next possession, sacking Keytron Crowder for a 9-yard loss on fourth-and-7 from the Parkway 26.

The Panthers then marched 65 yards in 14 plays for a touchdown, converting two fourth-and-8 situations along the way. Wudtee ran 22 yards and completed a 12-yard pass to Lancaster.

After forcing Southwood to punt from deep in its own territory, it took Parkway just three plays to score its final TD of the first half. Wudtee hit Lynn in the back corner of the end zone with 51 seconds left. McAtee’s third PAT gave the Panthers a 21-0 halftime lead.

Parkway added two more touchdowns in the second half on a 28-yard pass from Wudtee to Lancaster and a 1-yard run by Robert McKnight.

Wudtee completed 11 of 15 passes for 127 yards. Lancaster had three catches for 50 yards and Morgan had three for 24.

Parkway had 176 yards on the ground. McAtee led the way with 54 on six carries. Stacy McCray had 37 on eight.

Dante Williams led the defense with 13 tackles. Ryan Black had 10 and Hunter Huckaby nine. Greg Jones intercepted a pass and returned it 29 yards to set up a second-half touchdown.

Parkway returns to Lee Hedges Stadium next Thursday to face Byrd (6-0) in a game that should go a long way toward deciding the district title. Byrd played Captain Shreve Friday night.

“Now the motivation and all takes care of itself,” Feaster said. “Everybody knows Byrd is one of the best teams in the state.”