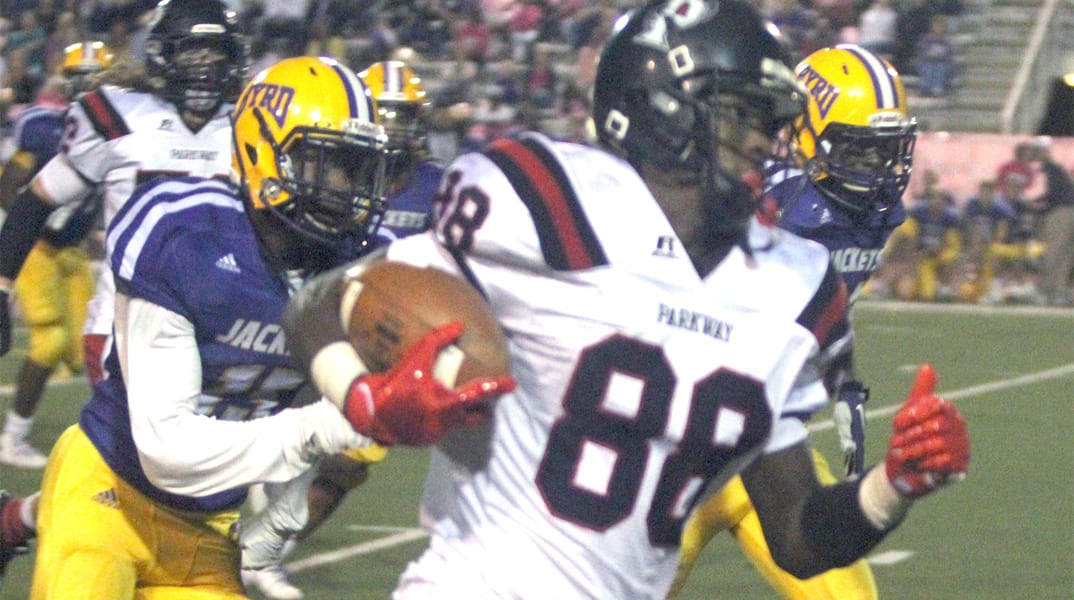 Competing against the best of the best, Parkway rising seniors Justin Rogers and Terrace Marshall Jr. made their presence felt in The Opening Finals last week in Beaverton, Ore.

The Opening Finals is an annual event sponsored by Nike that brings together more than 160 of the top high school football recruits in the nation for four days of instruction and competition.

Fields, named the MVP of the event, is considered by some as the top quarterback prospect in the nation in the Class of 2018.

Marshall also played for Vapor Speed and caught several TD passes. He was unable to play on the final day after taking a hard fall going high for a ball in the end zone the day before.

The 6-foot-4 Rogers was twice named a Player of the Game in 7-on-7. He threw four TD passes in a 26-7 win over Alpha Menace in the second round of the playoffs and two in an earlier win over the same team.

Rogers was also impressive in a 20-13 semifinal win over Untouchable, hitting Rummel’s Ja’Marr Chase with a perfect strike down the sideline for the winning score.

Rogers and Marshall were among 35 players on SBnation.com‘s All-Opening team.

Before the 7-on-7 competition, players took part in individual drills.

On the opening day, Hall of Fame receiver Jerry Rice was one of the instructors. Rogers passed to him in drills, and he and Marshall posed with him for photos.

“That kind of stuff is just crazy,” Rogers said in an interview with Greg Powers, National Recruiting Expert at scout.com. “It’s still a surreal moment. I still can’t believe I just threw a pass to Jerry Rice. Not too may quarterbacks can say they did that.”

Former LSU star Odell Beckham Jr. also made an appearance as did other former and current NFL players.

Marshall and Rogers both reveled in the experience.

“Only Day 2 at the opening and I can already say this the best experience of my life!” Marshall wrote on Twitter.

Here are what some other national and regional recruiting experts wrote or posted on social media about Rogers and Marshall during the four-day event.

“Justin Rogers to Terrace Marshall connection hits again on play one for a TD, but it’s called back. Those two are putting on a clinic.” — Shea Dixon, covers recruiting and the LSU beat for 247sports.com, on Twitter.

“On the day, we tracked Marshall with 13 catches and two touchdowns but he had several big plays downfield without scoring and he had a couple of other touchdowns that were called back due to sacks or spectacular breakups. Simply put, Marshall was the best deep threat at the event.” — Barton Simmons, College Football Insider and Director of Scouting for 247sports.com, in a website post.

“The TCU commit led his team to the championship game with two solid days. He attempted more passes than any quarterback in the event (127) and completed 71 percent of them with 14 touchdowns and six interceptions. He was the one quarterback who really wasn’t afraid to take shots down field. His stats didn’t come from dinking and dunking.” — Keith Niebuhr, 247sports.com/CBSsports.com, in a post on 247sports.com.