Parkway’s Keith Billiot is already one of the most influential teenage politicians in the state and will soon be headed to Washington D.C. to meet President Barack Obama and other high-powered politicos.

Billiot received the incredible honor of recently being elected Governor by his fellow ‘citizens’ at Louisiana Boys State, a leadership development program for young men sponsored by the American Legion. Each participant, termed ‘citizens,’ not only learns the ins and outs of the Louisiana political system but also how to become effective leaders in their school, community, state and country. 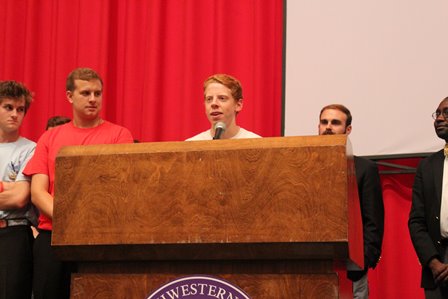 Nearly 370 delegates from across Louisiana converged at Northwestern State University in Natchitoches, where Boys State marked its 75th anniversary. It was Billiot’s rousing campaign speech that led to him being elected Governor, the highest position possible.

“I briefly talked about my experiences being able to travel across the United States and told my citizens we have the privilege to live in one of the most beautiful states in the Union,” Billiot said afterward. “People across the nation will doubt and be negative toward Louisiana, but we future leaders must stand up and prop up our state, be proud of it and do everything we can for it.”

Billiot also spoke about a Marine soldier and echoed his words, “If not me, then who? He explained if we do not stand for our state and nation, then who will? And I talked about our responsibility as future leaders of America.”

As if being chosen Governor-Elect was not exciting enough, Billiot was then one of two delegates selected to attend Boys Nation later this month in Washington, D.C. There they will debate legislation with 100 other citizens from across the nation, tour the U.S. Capitol and meet President Obama.

“I feel tremendously blessed to have been chosen to go,” Billiot said. “It’s hard to believe.”

Billiot’s future plans are to attend the U.S. Naval Academy. His application will, no doubt, stand out now as Governor of Boys State and delegate at Boys Nation.