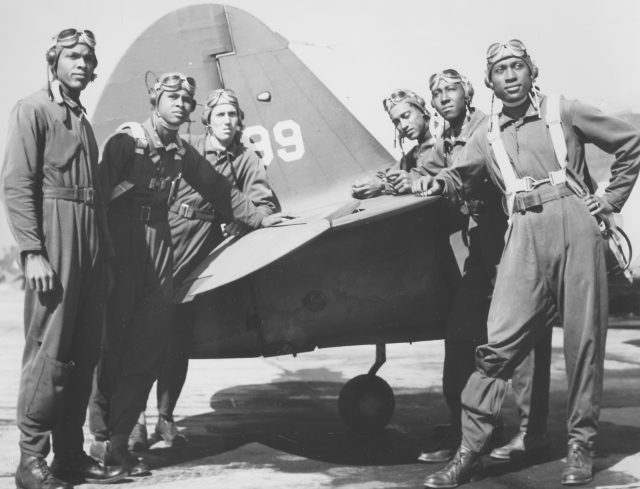 Performing Arts Serving Acadiana is offering two talks about the Tuskegee Airmen by Theodore Foster, PhD, Associate Professor of History at the University of Louisiana Lafayette. These lectures are a part of (PASA’s) Black Angels Over Tuskegee performance.

The lectures will focus on the history of the Tuskegee Airmen and their role in World War II and in shaping military history. The lectures are free of charge and will take place March 24, 6 p.m. at Washington Recreation Center, 705 South Bridge Street, Washington, LA, and April 4, 6 p.m. at Jeanmard Hall, Our Lady of Wisdom Catholic Church, 501 E St. Mary Blvd. PASA encourages you to sign up for these events on Eventbrite: https://bit.ly/TusktalkWash https://bit.ly/TusktalkWis

Foster earned his Ph.D. in Black studies from Northwestern University in Evanston, Illinois and since Fall 2019 has been an assistant professor of African American History at the University of Louisiana Lafayette. He researches, teaches and writes on the politics of historical memory within civil rights, Black freedom and racial progress narratives.

Originally opened in Los Angeles in 2009, Black Angels Over Tuskegee transferred to New York, opening off Broadway. This award-winning, historical docudrama is the story of six men embarking upon a journey to become the first Black aviators in the United States Army Air Forces in an era of racial segregation and Jim Crow idealism.

Layon Gray, a native of Alexandria, LA, graduated from the University of Louisiana Lafayette in 1996 (then USL), is a member of Kappa Alpha Psi Fraternity and was active in the local theater scene in proceeding years. He moved to Los Angeles and his professional career took off.

He developed Black Angels Over Tuskegee, using his own interviews with Tuskegee Airmen and other research.

“Some plays teach, others celebrate, and a few simply entertain. Black Angels Over Tuskegee manages to do all three and one thing more: It inspires,” says Backstage Magazine about this important drama.

One of the longest-running Off-Broadway productions, Black Angels Over Tuskegee movingly illustrates how the men unite in brotherhood to achieve a communal vision.

Commonly referred to as the Tuskegee Airmen, these men came together to participate in the Army Air Corps program, which sought to train and prepare African-Americans to fly and maintain combat aircraft. The group included pilots, navigators, bombardiers, maintenance, instructors and support staff personnel who were charged with keeping the planes operable and in the air.

The Tuskegee Airmen conquered isolation and prejudice to become one of the most highly respected fighter groups of World War II, forming the 99th Pursuit Squadron. They proved conclusively that African-Americans could fly and maintain sophisticated combat aircraft. The achievements of the Tuskegee Airmen paved the way for full integration of the U.S. military.

The Black Angels Over Tuskegee performance and project activities are sponsored, in part, by Ochsner Lafayette General, Clarion Pointe, Kinchen Funeral Home and the law firm of Oats & Marino.

“As a leader in providing quality of life in Acadiana, Ochsner Lafayette General believes that the public performance of Black Angels Over Tuskegee will allow the community to collectively gather and gain a unique perspective into the historical legacy of the Tuskegee Airman, which has and will continue to empower and educate all of us,” says Tonya Bolden-Ball, Regional Director of Diversity & Inclusion for Ochsner Lafayette General.

“This performance is an unusual opportunity to examine an era of American history, the important role that Black soldiers played in World War II, and to celebrate the talent that has blossomed from the University of Louisiana and from our local theater community,” says PASA executive director Jacqueline Lyle. “We hope that veterans, drama fans and people of all ages who are fans of live entertainment will join us on March 31 for this performance.”

This project is supported by a grant from the Louisiana Division of the Arts, Office of Cultural Development, Department of Culture, Recreation and Tourism, in cooperation with the Louisiana State Arts Council, as administered by the Acadiana Center for the Arts, and an Enterprise Fund grant from Lafayette Convention and Visitors Commission. Funding has also been provided by the National Endowment of the Arts.

Tickets for Black Angels Over Tuskegee are available at www.pasaonline.org. A Family & Friends 4-Pack, priced at $100, is available in every seating area, from the first row to the last. Additional ticket fees and other charges will apply and will vary, based on the method of purchase. The most economical ticket fees are available through in-person purchase at the Heymann Center Box Office. Box office hours are 9 a.m. – 4 p.m. Tuesday through Friday, 9 a.m. – 1 p.m. on Mondays. The box office is closed on Saturdays and Sundays.