It is difficult to pay Cope Middle School teacher Chad Patterson a compliment. As soon as you do, he turns it around and gives the credit to others. Not this time.

Nearly a dozen of his Cope colleagues nominated Patterson for Bossier Schools’ Gold Star award, so others would learn of the many ways he goes above and beyond for his students, his school and the district. He was surprised by the announcement at an honors assembly before the entire student body and faculty.

“I was not expecting it at all,” Patterson said. “I am very grateful. I don’t deserve this.”

Patterson began his career with Bossier Schools as a student teacher at Parkway in December 2009, then was hired full-time for Cope’s autism program. He loves what he does and it shows.

“I have a lot of fun doing it. There’s nothing I’d rather be doing,” he said. 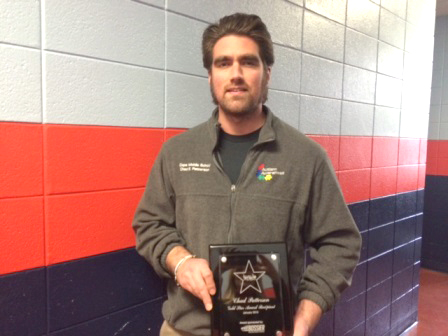 Asked when he gets the most satisfaction from his job, Patterson answered, “Definitely for me it’s whenever they’ve been struggling with something and when you least expect it, they show you they get it because they’re non-verbal. I also have really good paras that support me.”

Fellow teacher Pete Traylor described Patterson as a renaissance man, writing “He can do just about anything and he works magic with his students. He is the most interesting teacher in Bossier Parish and a model for all teachers.”

He gets the term “renaissance man” because he makes his own soap, grows and dries herbs, writes music and plays the guitar.

Patterson was also the driving force behind Cope raising $3,300 last year to buy wheelchairs for a special needs orphanage in Peru. He saw the need after visiting and asked Principal Judy Grooms if the school could do something to help.

“Again, that was Cope that did that,” Patterson is quick to say.

What really impressed his fellow Cope Cougars, though, was a recent event involving one of the students in his class.

Melissa Sparkman said her nomination letter, “Chad started searching from the time he found out he was missing until they found him, which was the next day. Chad stayed out all night looking for his student. And he also checked in here at school for his in-service and came on back to school for the rest of the school day after the child was found, after being up all night. Chad loves his students and goes way above and beyond for them.”

Marta Hernandez added, “Chad personally put over 400 miles on his car searching for this child. He is without a doubt the most caring and loving teacher these students will ever have. I am honored and proud to work with him at Cope Middle.”

There is no question Chad Patterson has a heart of gold and is most deserving of a gold star — the Bossier Schools’ Gold Star award.