A Bossier City girl is going on the trip of a lifetime after the community rallied together to make her dreams come true.

Jamarria Wade, 9, is losing her battle with terminal cancer, but dreams of going to Disney World in Orlando, Fla. Pay It Forward Networking informed Jamarria and her family Tuesday that they will be leaving Sunday for the trip of a lifetime, thanks to community donations and fundraisers.

Several events were held this week to support Jamarria’s quest to Disney. The first was a Disney themed event at Chick-Fil-A in Bossier Monday night, where a portion of sales went to Jamarria and her family. Then, the Bossier City Fire Department sold hamburger lunch plates Tuesday to collect donations for the family.

Social media also played a vital role in fulfilling her wish. A GoFundMe.com page has collected more than $7,000 to support the family.

Joining Jamarria on her trip to Disney World is her mother, Kimberly Wade; father, Antoine Wade; and her two sisters, O’Breyon and Heavin. 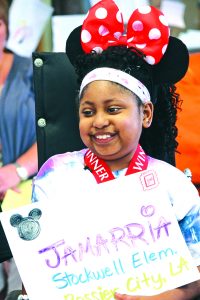 Pay It Forward Networking (PIFN) is a local non-profit group that grants wishes through social networking for children with special needs, those facing adversity and/or disabilities. PIFN brings individuals together with the common goal of providing hope and dreams to children in those circumstances.

In 2011, Jamarria was diagnosed Rhabdomyosarcoma, a cancerous (malignant) tumor of the muscles and the most common soft tissue tumor in children, after doctors found a tumor in her stomach. Her mother, Kimberly Wade, said she went through many rounds of chemotherapy and several surgeries after that.

However, the tumors continued to spread throughout her body and there’s nothing more doctors can do.

Despite the reality of the situation, Jamarria’s family is excited about their upcoming trip. Jamarria said she’s looking forward to riding the roller coasters and hopefully meeting Princess Jasmine.

Kimberly, however, said she looks forward to seeing her daughter smile at the happiest place on Earth.

“Seeing every smile, her facial expressions and knowing how happy she’s feeling,” she said. “That’s enough for me.”

In addition to the trip, Jamarria received a private dance lesson with Vicki’s School of Dance in Bossier City and a paid shopping spree to the Outlets at Louisiana Boardwalk through cash and gift card donations.

Kimberly would like to thank everyone who helped make Jamarria’s dream come true.

“To all of them, I pour out my heart to say thank you. I have no words to explain how much of a blessing this is to us. We are beyond blessed. You all are my angels on Earth.”

For more information on Pay It Forward Netowkrin, visit their website at www.payitforwardnetworking.com or their Facebook page.