On Nov. 8 we have a very important election for our country, our state and our cities. We have a Presidential election, U.S. Senate race and Congressional race for the Fourth District, which all of course are federal government.

In Bossier, we have a 2nd Circuit Court of Appeals race and three millage proposals. I support renewals for the health unit for the valued services it provides and the roads and bridges renewal.

There is also another millage item for the South Bossier Fire District that some residents in Bossier will be asked to consider. Fire protection is very important to our community and is taken into consideration for homeowners’ insurance rates. This fully justifies the passage of this millage.

In both parishes, we have six constitutional amendments.

Proposed Amendment No. 1
“Do you support an amendment to provide that the manner of appointment for the registrar of voters in each parish is as provided by law and to require the qualifications of the registrar to be provided by law?”
This constitutional amendment has to do with our registrars of voters. The constitution said that in the manner provided by law, this amendment, along with Act 414/HB471, puts requirements in place for the registrars of voters, which in my opinion are common sense and need to be followed. The registrar needs to be a resident of the parish in which he performs his duties. The registrar shall possess at least one of the following at the time of appointment: (a) A baccalaureate degree from an accredited institution and two years of full-time, professional work experience; (b) An associate degree from an accredited institution and four years of full-time, professional work experience; (c) Seven years of full-time, professional work experience; or (d) Five years of full-time employment in a registrar’s office in Louisiana.
This is one of the issues we needed to make clear in the constitution, so we had to amend it to allow us to clarify in state law with regards to qualifications. 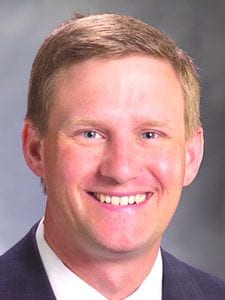 Proposed Amendment No. 3
“Do you support an amendment to eliminate the deductibility of federal income taxes paid in computing state corporate income taxes?”
I do not support this constitutional amendment although I am supportive of making our tax code simpler and flat. The amendment is structured along with other pieces of legislation; it will be an increase in taxes to corporations by approximately $200 million. Our private sector provides jobs in our state and we need to have tax reform that promotes economic activity and growth and not punish our good corporate citizens who are in our state. I encourage you to vote no on this amendment.

Proposed Amendment No. 5
“Do you support an amendment to establish the Revenue Stabilization Trust Fund for the deposit of recurring mineral and corporate tax revenues, to restrict the use of the fund to 10% of the balance when the balance reaches $5 billion, to restrict the use of the fund to construction projects and transportation infrastructure, and to allocate recurring mineral revenues to the payment of state employee retirement debt?”
This constitutional amendment creates the Revenue Stabilization Trust Fund and provides for deposits of funds and for the use of the funds. This fund is established to deposit mineral revenues and excess corporate revenues into it. Once the fund has a minimum balance in excess of $5 billion, up to 10 percent could be spent for capital outlay and transportation projects, but not ongoing government services and programs. The fund balance can be changed by 2/3 vote of the Legislature. There are a list of 12 areas of government that will be funded with revenue before money will go into this fund. Allocation of mineral revenues in excess of $660 million and less than $950 million shall be allocated with 30 percent being appropriated to the Louisiana State Employees’ Retirement System and the Teachers’ Retirement System of Louisiana to pay off the balance of the Unfunded Accrued Liability. The essence of this amendment is to establish a fund when mineral revenue and corporate taxes are high to establish a savings account to be used to save money in years we have excess in income and corporate revenues to provide for future capital outlay and UAL and not allow our state to spend excess revenues in a current year and not have a sustainable income flow.

This constitutional amendment is relative to eliminating deficits in the current fiscal year. It allows for the reduction of constitutionally protected expenditures which would allow for reductions to eliminate project deficits in an ensuing fiscal year when the forecast for the next fiscal year has been reduced by at least one percent from the most recently adopted estimate for the ensuing fiscal year. This will allow for us to have more flexibility in solving budget reductions or mid-year budget reductions in our state, thus sheltering health care and higher education from a greater amount of cuts.

Sen. Barrow Peacock represents Bossier in the Louisiana Senate. This article was published from his Fall 2016 Newsletter