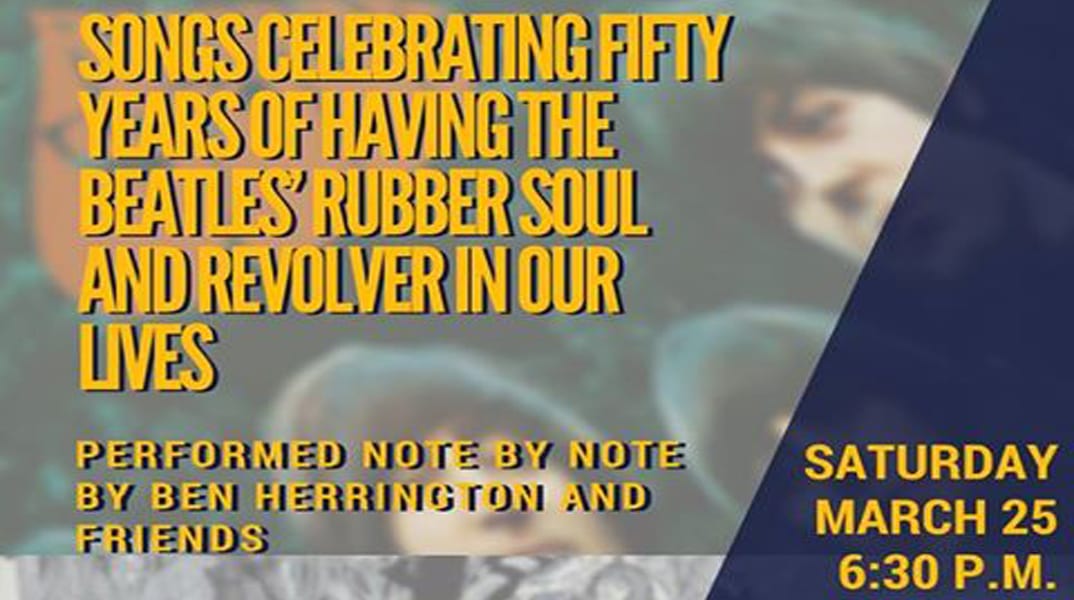 A Baton Rouge collective will bring to an intimate and unique live performance of a legendary Beatles music to Shreveport-Bossier to benefit a Christian ministry.

Rubber Soul and Revolver will be presented by Ben Herrington and Friends Saturday, March 25, at Fairfield Studios, 1508 Fairfield Ave., Shreveport, beginning at 6:30 p.m. with an opening by Shreveport’s Odom and Huckabay. Proceeds will benefit Christ in the City, a state-wide ministry taking Christ outside church walls.

In 1966, the Beatles released their ground-breaking album, Revolver.  Revolver was a clear signal that the band was embarking on a major new chapter in their career, and that the studio album was now their primary art form.  Revolver’s immense variety of musical styles, innovative production techniques, together created a powerful work which the band had no intention of performing live through the raucous concerts that had become their hallmark to that point.

Saturday, March 25, in celebration of the lasting influence the album has had on successive generations of musicians,Ben Herrington and Friends will perform Revolver in its entirety, plus as a bonus, selections of the also transformative Rubber Soul album which preceded Revolver. This show has been performed before sold-out audiences in New Orleans, Baton Rouge and Lafayette.

Tickets are $20 per person, and may be purchased at the door, or by contacting revmelville@cox.net; call 225-397-6393; or Facebook message at fb.com/christinthecityBR. For more information regarding Christ in the City, visit www.Christinthecity.net.