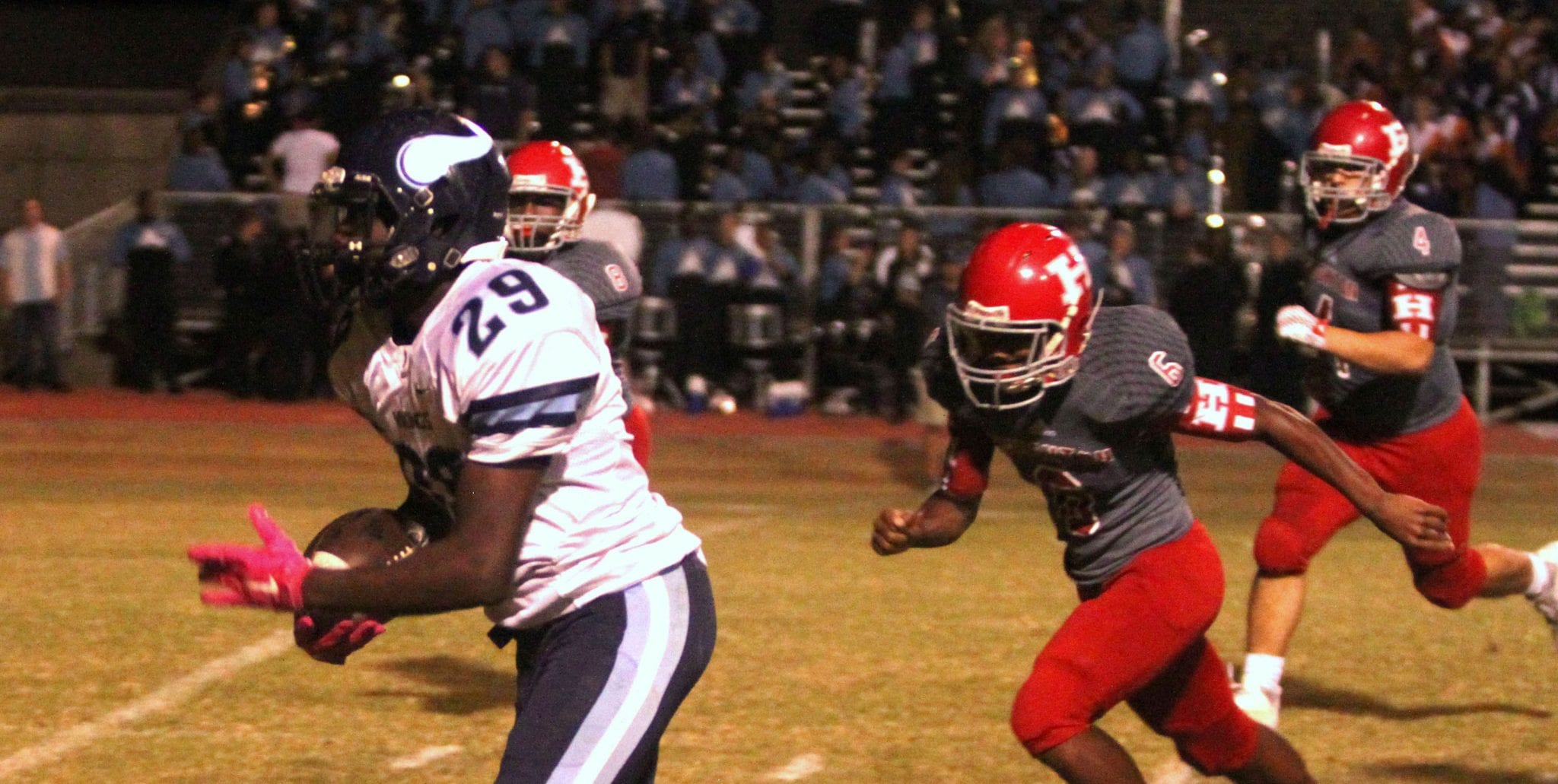 When Haughton cut Airline’s lead to 27-21 early in the fourth quarter, it looked like the District 1-5A game might be headed toward a thrilling finish for the third straight year.

But the undefeated Vikings answered with a touchdown drive led by quarterback Thomas McKain. Brian Fielding’s 7-yard sweep around left end and Gabe Rodriguez’s PAT put Airline ahead 34-21 with 5:31 left to play.

Both coaches were pleased with the way their teams competed.

“We knew coming over here Haughton was going to give us their best every time,” Airline coach Bo Meeks said. “We play close games over here every time. But our guys finished strong, really proud of the way we finished. Heckuva job. Hats off to Haughton.”

Said Haughton coach Rodney Guin: “That was probably the best game that we’ve played. We haven’t been playing well. They fought hard tonight. These teams are very good. That’s what I told them just now. Every team we’re playing right now has the chance to compete for the state championship. We just have to keep getting better.”

But the Vikings responded with an impressive drive of their own. Shun’Cee Thomas, who rushed for 179 yards on 26 carries, scored from 10 yards out.

The Vikings’ took the lead for good on Brian Fielding’s 45-yard touchdown run a few minutes later. Fielding had 64 yards on eight carries.

Airline dominated statistically but the Bucs kept the pressure on and never let the Vikings get too comfortable with some big plays on special teams.

After the Vikings went ahead 17-7 on Rodriguez’s second field goal, Kei’Untre Normandin returned the kickoff 94 yards. That set up Brooks’ second TD, a 3-yard run.

Airline got a big 42-yard field goal from Rodriguez as time expired at the end of the first half to go up 20-14.

“Gabe was outstanding,” Meeks said. “A great drive before the half right there in the two-minute. Very proud of Thomas and the way he led that drive.”

Thomas gave the Vikings a 13-point lead with a 64-yard touchdown run midway through the third quarter.

Later in the quarter, Haughton returned a short punt down the sideline to the Airline 22. The Bucs cut it to six with 11:20 left in the game on Brooks’ 6-yard pass to Antonio Woodfork, who dove over the pylon for the score.

That set up Airline’s final TD drive. The Vikings converted a couple of third-down situations. Thomas also ran for a first down on fourth-and-1.

“We did a great job of answering when we had to all night,” Meeks said. “The offensive line took over when we needed to. Really proud of Thomas McKain. I thought he played a great game.”

McKain completed nine of 17 passes for 91 yards with no interceptions. He had a big completion to Cameron Howell near the Haughton sideline on the field goal drive just before the half. Howell had three catches for 49 yards.

Guin said the Vikings big linemen on both sides of the ball eventually wore his team down.

“They’re so good up front,” he said. “They outmanned us on offense and defense up front. Eventually that’s just hard to overcome. But we’re getting better. We’re going to be looking for Week 11 (first week of playoffs) and hope we don’t have to play one of the teams in our district.”

Brooks led the Bucs with 40 yards on 12 carries. Normandin added 32 on 12. Leading rusher D’Kovin Ware missed his second straight game with an injury.

Brooks completed 14 of 32 passes for 96 yards. Christopher Douglas had three catches for 26 yards.