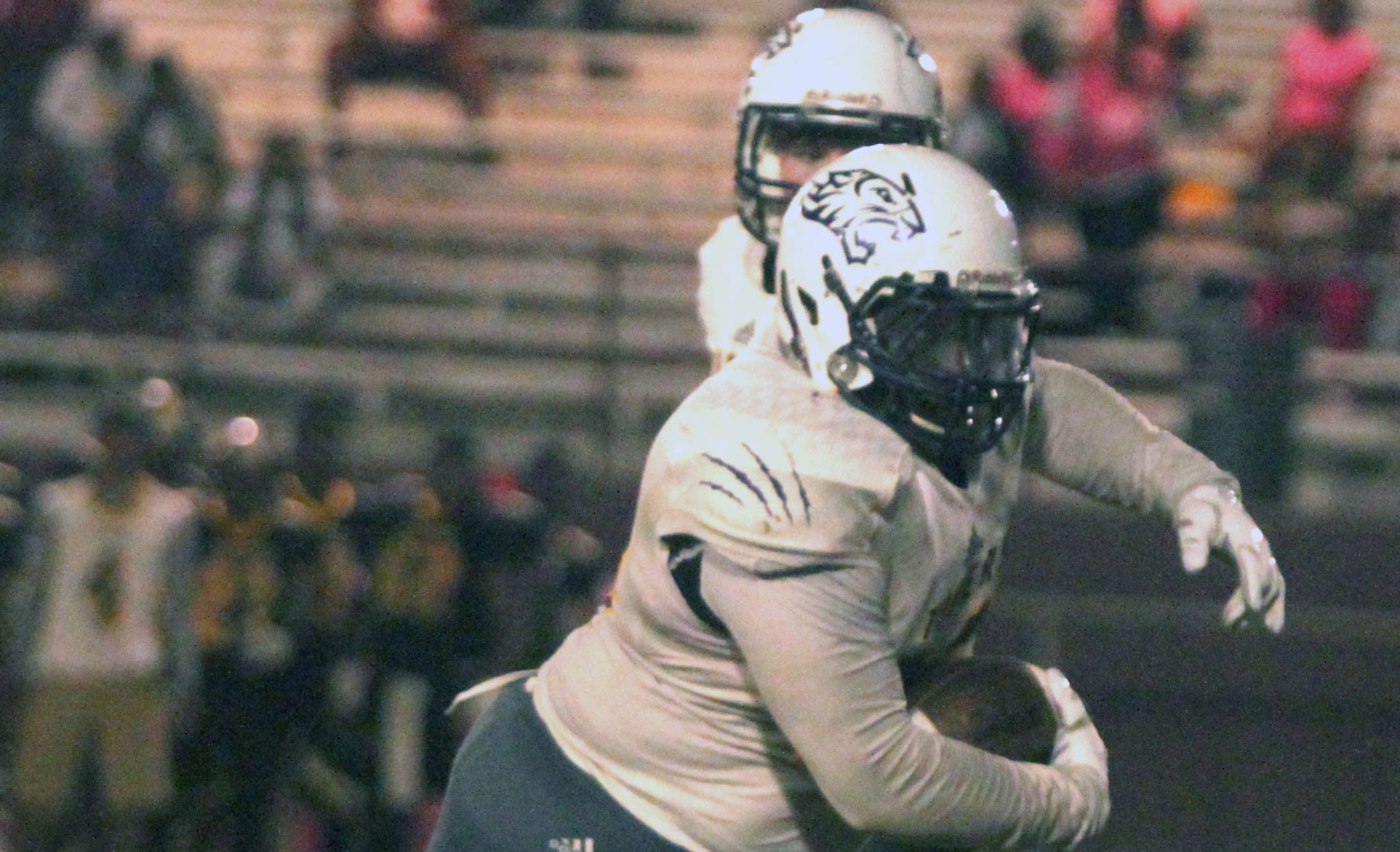 Even though his team led 20-8 at the half Thursday night against Fair Park, Benton coach Reynolds Moore didn’t feel like the Tigers had played well.

Two of Benton’s touchdowns came on interception returns by Zeke Barnett and Dalton Rangel. The other TD, a short run by quarterback Garrett Hable, came on the Tigers’ only sustained drive of the first half after a Dorsavion Williams interception.

Benton’s defense held the Indians without a first down until midway through the second quarter. But Fair Park put together a touchdown drive, giving the Indians some momentum.

Led by running back Robert Rochell, Fair Park came out in the third quarter and scored two touchdowns and a two-point conversion to take a 22-20 lead.

So how did the Tigers react? Simply by scoring three fourth-quarter touchdowns en route to a 42-22 victory at Leonard Barnes Stadium.

After Fair Park took the lead, the Benton offense began clicking and the Tigers regained the lead on Chauncey Taylor’s 1-yard run. Taylor had a 5-yard run one play earlier on fourth-and-1. Hable’s two-point conversion run made it 28-22 with 11:03 left in the fourth quarter

The Tigers forced a fumble on Fair Park’s next possession. Hable hit Collin Milton over the middle and Milton turned it into a long gain to the Fair Park 11.

Doyle Adams Jr., who had a big game, caught a shovel pass from Hable and swept around right end 11 yards for the score. A 2-point conversion made it 36-22 with 8:53 left.

“I told our guys at halftime that I didn’t think we played the greatest half,” Benton coach Reynolds Moore said. “They outplayed us in the first half. They played harder than we did. They made a couple of mistakes we were able to capitalize on.

“I told our guys I thought we were a good football team we just had to play like it. And they had a chance to come back out and play for 24 minutes, and if they wanted to play like we were capable of we’d stay ahead, and we’d be fine, but if they went back out there and played 24 minutes like they did the first 24, I told them I really felt like we’d lose the game. They had to decide what kind of team they wanted to be and how they wanted to respond.”

It took awhile, but the Tigers realized what was at stake when the Indians took the lead with 3:55 left in the third quarter.

Hable completed 20 of 30 passes for 168 yards and one touchdown. He also had a 32-yard run to the 1 on the Tigers’ second-quarter touchdown drive. On the go-ahead touchdown drive, he ran for a first down on third-and-3.

Adams had seven catches for 74 yards. Just about all of them were significant, helping to keep drives alive. His final catch set up the Tigers’ last touchdown, a short run by Jermaine Newton.

“He did a good job for us tonight,” Moore said. “He had some nice runs after the catch after some short throws.”

“They didn’t give it to us,” he said. “Our guys made the plays they were supposed to make. To me that’s the sign of a good football team .”

Fair Park had 213 total yards with almost all of that coming on the ground. The Indians completed just one pass late in the game. Rochell led the way with 154 yards on 16 carries.

“He does a great job,” Moore said. “There’s no doubt about that. He can do it all. We saw him make some great catches on film. Fortunately, we were able to keep him from doing that tonight but he did it in the run game. There’s always one kid that’s dangerous and there’s another coming next week.