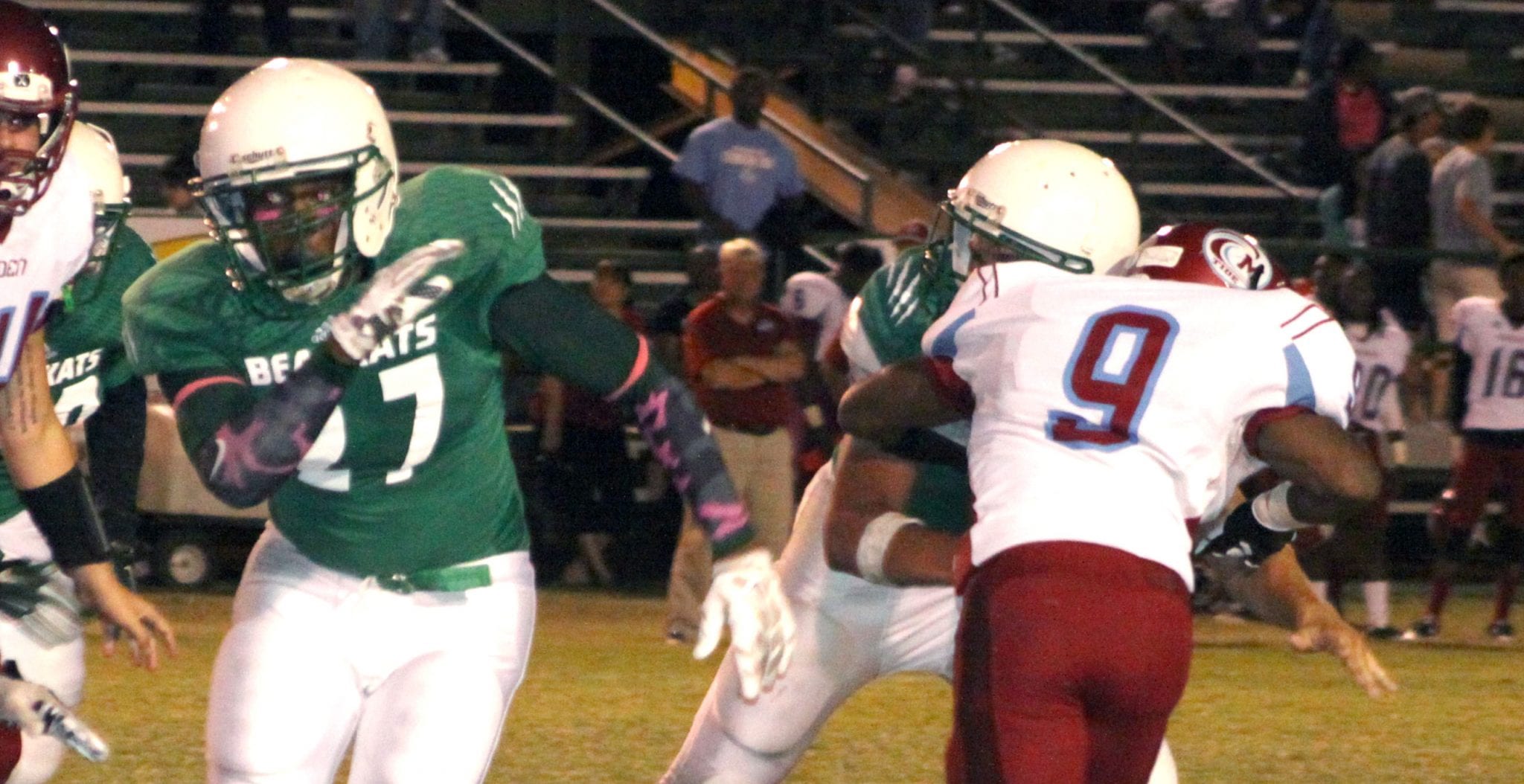 Junior Keldrick Carper scored four touchdowns to lift the Plain Dealing Lions to a 28-6 District 1-1A victory over the Ringgold Redskins Friday night in Plain Dealing.

The Lion snapped a two-game slide and improved to 2-3 overall and 2-2 in district. Ringgold dropped to 3-4 with its fourth straight loss and 0-4 in district.

Carper, one of the state’s top college prospects in the Class of 2017, scored three different ways. He rushed for two touchdowns, caught a touchdown pass from Matt Sullivan and returned an interception about 60 yards for a score.

Except for his interception return, all of Carper’s TDs were in the 10- to 15-yard range, Plain Dealing coach James Thurman said.

The Lions were coming off a tough overtime loss to Grambling last week. Because of injuries they were only able to dress about 20 players and a few of those got hurt during the game.

“We dressed 20 kids and three of them were junior high kids and two of the eighth-graders started,” Thurman said. “At the end one of them was starting both ways.

Carper played quarterback, wide receiver and running back at times during the game.

Thurman said his offense had a couple of turnovers but played well for the most part.

“We put together some drives and we threw the ball around a little bit,” he said.

The Lions defense did a good job of holding Ringgold running back DeAndre Scott in check.

“We kept him out of the end zone which is a pretty tough task,” Thurman said.

Minden 35, Bossier 10: At Bossier, the Bearkats played even with the Crimson Tide statistically but hurt themselves with turnovers in the District 1-4A loss.

The Bearkats held a Minden team that put up big numbers against Benton last week to just 222 total yards. Bossier had 192 yards, but the Bearkats had three turnovers (lost fumbles) to one for Minden.

Two of Minden’s touchdowns came on a returned fumble return and kickoff return.

Bossier fumbled on its opening drive, and Minden’s Kenneth Francis returned it 50 yards for a touchdown. Minden drove 67 yards in six plays for its second touchdown, a 2-yard run by Rodtravian Rogers.

Keimun Daniels returned the ensuing kickoff to the Minden 10, but the Bearkats had to settle for a 20-yard Rene Alvarado field goal.

Minden’s Delketrick Freelon returned the kickoff 75 yards for a touchdown to give the Tide a 21-3 lead late in the first quarter.

The Tide scored its fourth touchdown on a 90-yard drive early in the second quarter. L’Jarius Sneed’s 43-yard reception was the key play.

The Bearkats fumbled the ensuing kickoff and Minden went 31 yards for a 35-3 halftime lead. The Tide converted a fourth-and-3 at the Bossier 10.

The second half was mostly a defensive struggle.

Bossier did put together a nine-play, 96-yard drive for its lone touchdown in the fourth quarter. Joseph Bush scored on an 8-yard run.

The teams attempted just 10 passes between them.