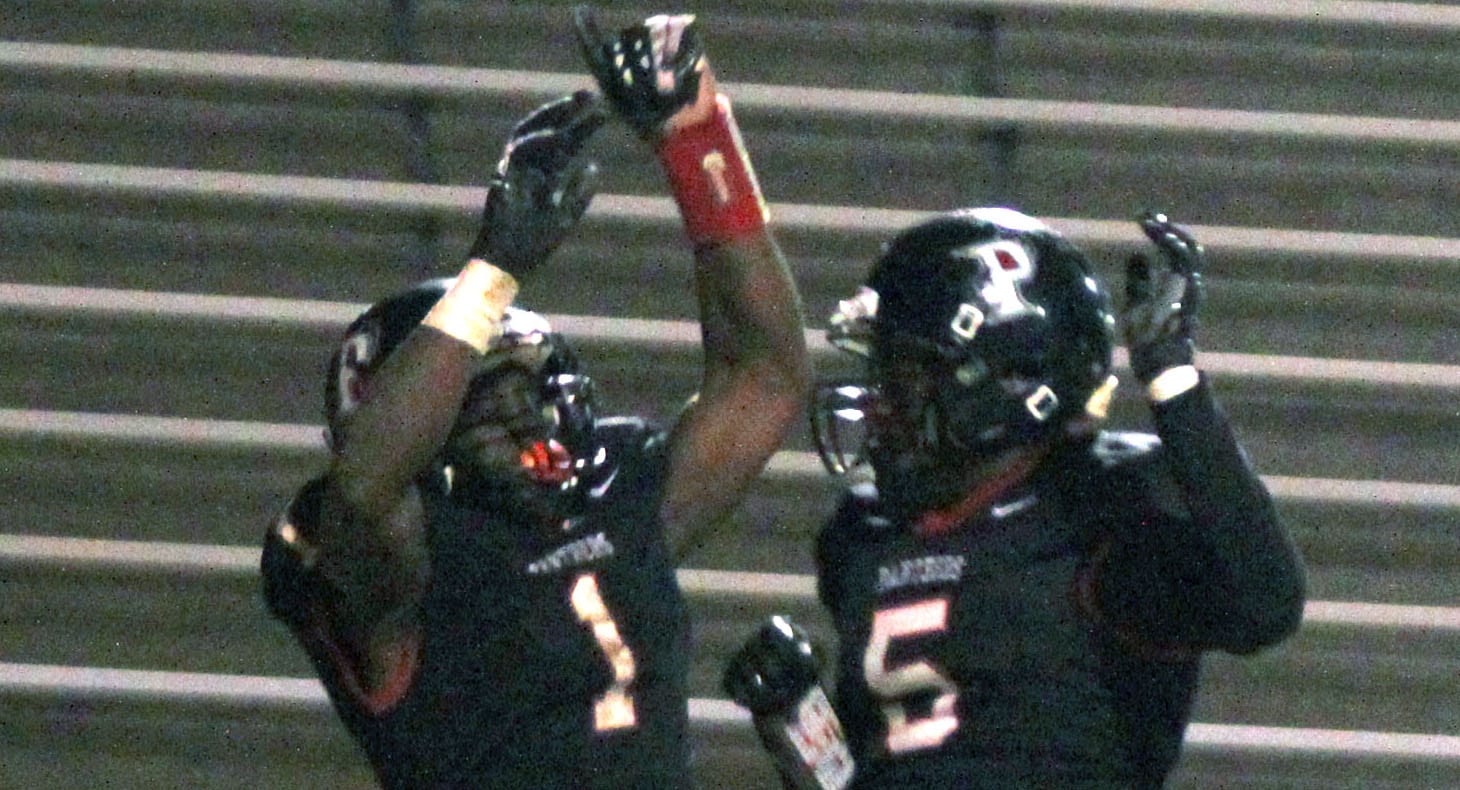 The Parkway Panthers advanced to the quarterfinals of the Class 5A football playoffs with a 55-28 victory over the two-time defending state champion Acadiana Wreckin’ Rams on Friday night before a large home crowd at Preston Crownover Stadium.

“We’re going to enjoy this awhile,” Parkway coach David Feaster said. “Everybody tells me when you go in Destrehan’s locker room they look like a college team. We’ll start preparing for them. It’s going to be a tough road trip and all that. But right now we’re just going to kind of enjoy this. Beating Acadiana, it’s almost a season in itself, to be honest with you.”

Parkway got a measure of revenge for a 77-41 loss to the Wreckin’ Rams in the 2013 state championship game. Acadiana’s last postseason loss was to West Monroe in the second round of the 2012 playoffs.

“A lot of things went well,” Feaster said. “Our punt was kind of weak, but everything else was just absolutely outstanding. Great job by our guys.

“We knew coming in that we could play really well and if we really played great we could be in it and have a chance to win it. But for us to shut them down the way we did. So many of the plays we were hoping would work turned into touchdowns.”

The Benton Tigers weren’t as fortunate as Parkway. Fourth-seeded Benton fell to No. 13 McDonogh 35 of New Orleans 48-0 at home.

The District 1-4A champion Tigers closed the season 10-2. McDonogh 35 (10-2) advances to play Warren Easton in the quarterfinals.

Parkway’s CJ Morgan caught three passes against Acadiana and all of them went for touchdowns. They covered 79, 20 and 34 yards.

His first TD came on the Panthers’ second play from scrimmage. He simply took a short pass and outran the Rams down the sideline in front of the Parkway bench. On his third one, he went up and grabbed a Keondre Wudtee pass in a crowd in the back corner on the end zone on the final play of the first half.

That gave Parkway a 35-12 lead and Acadiana got no closer than 21 points the rest of the way.

“CJ was phenomenal,” Feaster said. “On the second play of the game when he outran everybody and the Hail Mary over at the end of the half, that was big time. Every once in a while CJ does stuff and you say, oh, you know what, he is an SEC guy.”

Morgan’s TD pass started out like the same play he scored on earlier. Wudtee pitched the ball to him behind the line of scrimmage. Instead of taking off, Morgan found Marshall running wide open behind everyone.

“He can actually throw the ball pretty well, too,” Feaster said. “We knew he was capable of it. Just one of those things you hope it works. Obviously, their cornerback had to come up on it because he scored a touchdown the first time we ran it. It’s all about execution. We come out looking smart when the guys execute it well.”

That pass came after the Panthers stopped the Wreckin’ Rams on fourth-and-1 from the Parkway 4 leading 14-12. Ryan Black, Semaj Tarver and Nick So’oto led the charge.

“That was huge,” Feaster said. “That’s their gameplan — pound, pound, pound, run the clock, keep the ball away from us and go in a score. And all of a sudden they don’t score and we score and we’re ahead and the gameplan doesn’t look as good when they’re running our style. That was a huge stop.”

Wudtee completed 10 of 18 passes for 258 yards and five touchdowns. He also scored on a 2-yard run in the third quarter that put the Panthers up 42-12.

Robert McKnight contributed to the success with 88 yards on 10 carries as Parkway’s line dominated.

Harrison Hopkins was perfect on seven PAT attempts and also caught a 19-yard touchdown pass on fourth-and-9 that gave his team a 49-20 lead.

It looked liked that would be all the scoring for the Panthers. But Acadiana elected to try an onside kick after scoring with just 15 seconds left to play and sophomore Derious Bradford scooped it up and raced to the end zone.

The Parkway defense gave up some yards to Acadiana’s vaunted veer option attack but the Panthers also made some big plays.

Greg Jones and Lloyd Cole had interceptions that set up touchdowns. Cole’s interception in the final minute of the first half set up Morgan’s TD on the final play.

One of Acadiana’s TDs came after the Rams returned a shanked punt near the Parkway bench inside the 5. That put the Rams up 12-7. Parkway responded with 35 straight points.

Acadiana’s veer is not equipped for playing from behind, but the Rams managed to throw three TD passes. Of course, one of those was the one with 15 seconds remaining.

Feaster said he didn’t mind seeing Acadiana pick up some yards in the second half as long as the Rams didn’t break big scoring plays and the clock kept moving.

“Our defense had to bend but don’t break ” he said. “We changed our philosophy a little bit in the second half.”

At Benton, the Tigers were still in the game at the half, trailing 20-0. But McDonogh 35 took advantage of some mistakes and dominated the second half.

The Roneagles scored after Benton fumbled a kickoff return and returned a punt 65 yards for a score. They led 42-0 after three quarters. McDonogh 35 scored its final TD on a fake field goal.

Those seniors were part of 20 wins and two District 1-4A championships over the last two seasons.