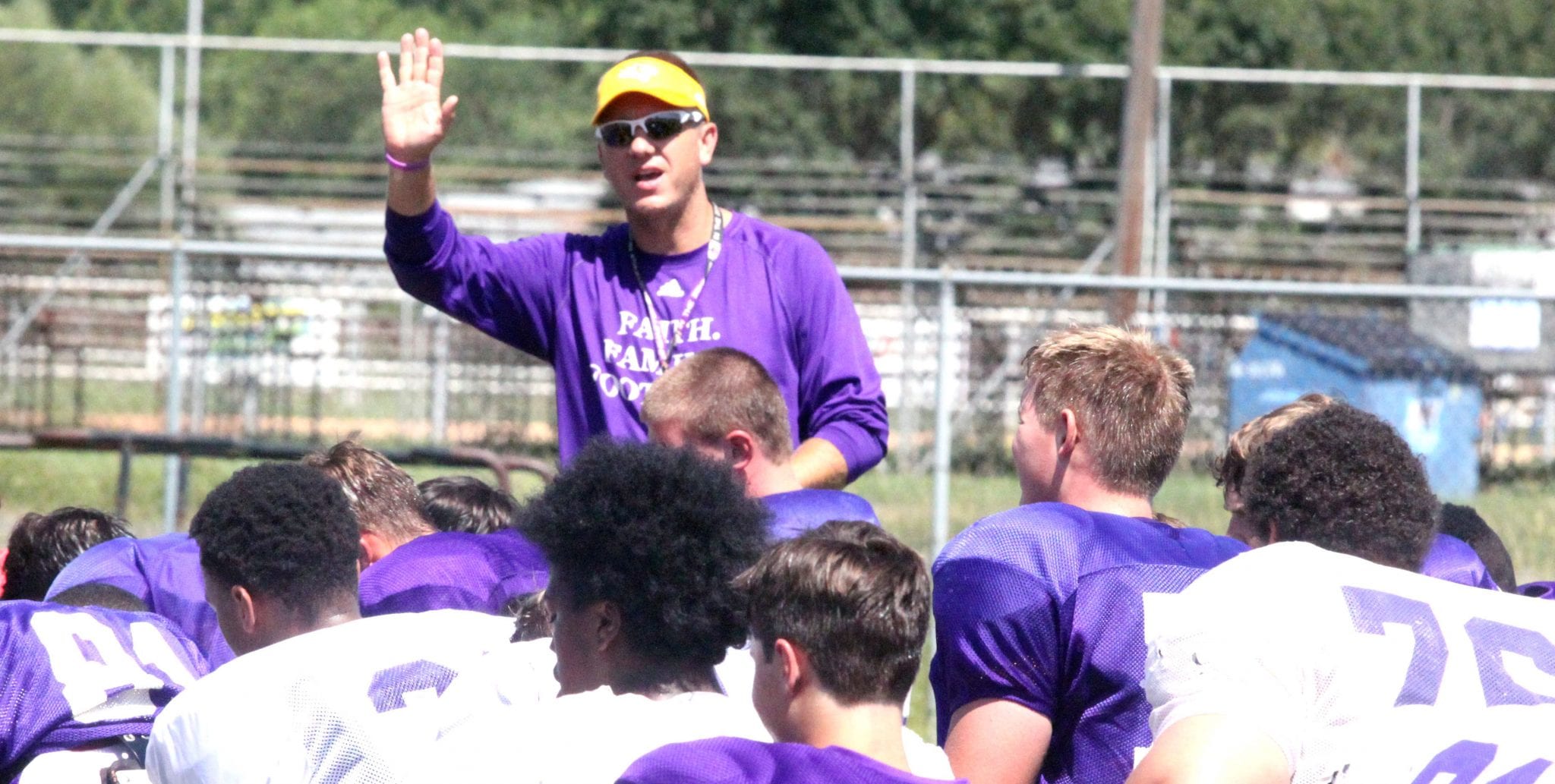 It’s August and the afternoon temperature is in the upper 90s. That can mean only one thing. High school football practice is here.
The Benton Tigers were the first parish team to officially begin. Coach Reynolds Moore opted to take advantage of a new LHSAA rule that allows schools to begin practice one week ahead of the official date if they opt out of spring practice.
So while Aug. 8 is the official first day of practice for LHSAA schools, it actually was Monday for Benton. However, most other parish schools are practicing in shorts, t-shirts and helmets this week.
Benton is the only school that can put on pads, and Moore plans to have his team do just that Thursday.
“That’s a bonus for us, I feel like,” Moore said.
The start of practice marks a transition from the offseason to actually getting ready for the season opener.
“We had good participation in the summer,” Moore said. “We had a lot of good work through our 7-on-7. Offensively, that wasn’t as big a concern for us as getting some different guys defensive work. Obviously it’s football, and we want to put pads on kids and see if they can tackle. That’s our biggest concern right now.
“It’s been good, though. Our kids have really got a lot stronger. We’ve seen a lot of their bodies changing, the way they’re approaching it and the way they look.”
Airline coach Bo Meeks, entering his sixth season at the helm of the Vikings, also likes how his team’s offseason went.
“I think the whole offseason went well, spring and summer,” he said. “I thought we a very good commitment level from our guys. They worked extremely hard. I think we really got bigger and stronger. I think our mental toughness improved.
“We won’t find out until we get into the heart of the season, that tough district schedule. That’s when we’re going to find out how much tougher we got mentally. I thought it was a great offseason. I’m really proud of the coaches and the players and how hard they worked and how much they improved.”
Like the other two parish schools in District 1-5A, Airline has a new starting quarterback — sophomore Brad Fream.
“I’m excited,” Meeks said. “I think Brad is going to do a great job. He had a really good spring for us, learning everything. He’s got a lot of potential, and great size. He’s a great young man. I think he’s going to be a great leader for us and a great player.”
First-year Haughton head coach Jason Brotherton is also pleased with how things went for the Bucs in the offseason.
“It’s been good,” said Brotherton, a longtime Haughton assistant who was promoted to head coach last November after Rodney Guin stepped down. “The kids have been excited. They’re working hard like everybody else has. We didn’t do a lot of things different than we’ve done every other offseason. We went one extra day a week. Other than that we did the same stuff we’ve always done.”
Parkway coach David Feaster gave his players most of the month of July off. He’s glad to be back on the field with them now.
“We had a great offseason and a great spring and a great June,” he said.
Feaster gave his players the week of Fourth of July off and the week of the coaching clinic in Baton Rouge in addition to last week, which he traditionally does.
“My main thought was, our guys have done a great job of showing up when I’ve asked them to,” Feaster said last week. “They’ve worked extremely hard, all through the offseason spring and June, and I don’t want them tired when they show up August 1. I wanted them excited about playing football.
“In fact, every time I go mow the field I see our guys out there either running the stadiums or running the track or getting the football and throwing it around. They are anxious to get after it and all that. I have the same philosophy with my coaches. I don’t want my coaches to be tired when we started. It’s a long season. I want them to be rested and refreshed and spend time with their families right now because when Monday gets here hopefully we’re going to start a long spell of football.”
Plain Dealing coach James Thurman said he got good participation from his players during the summer.
“I think overall we had better attendance than we did last year,” he said. “Of course, me coming in the middle of the summer kind of through everything in a spin. This year was my first spring and summer combined. We had a really good turnout in the spring and we had fairly solid turnout in the summer. I’m very, very pleased with it. We were able to compete in the 7-on 7s and did pretty well there.”
Plain Dealing hosted a six-team 7-on-7 tournament and finished second to Booker T. Washington.
“We would’ve liked to have won that, but just playing for it against a pretty good ballclub is not bad,” Thurman said. “It kind of gave us a little bit of confidence. We had a good offseason and summer. I’m really happy with the ones that have shown up consistently and I think we got a little better.”