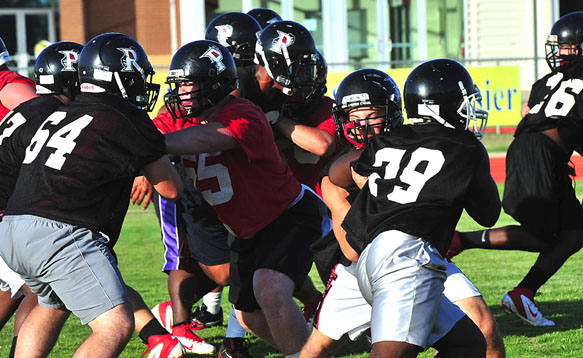 This week, players and coaches were greeted by high temperatures that resulted in heat advisories from the National Weather Service throughout the week.

Some teams, like the Parkway Panthers, practiced in the evening until school started Thursday.

Others practiced in the afternoon around the time they would if school had been in session.

“This is the first time all summer that we’ve gone at 3:30 at the peak of the day where it’s the hottest,” Brotherton said. “That first day was tough.”

Brotherton said he kept his team on the field for just over an hour.

“Tuesday was much better,” he said. “There was a little bit of a breeze. We were out there for about an hour and half. It’s gotten better since that first day on Monday, but Monday kind of jumped on them pretty good.”

The fact that there was a boil-water advisory for Benton that day didn’t help matters.

“Our manager did a great job of keeping our guys hydrated, and our guys did a really good job of adapting,” Moore said.

Like most teams, Benton worked out during the summer early in the morning and played 7-on-7 games in the evenings.

Just as it was for New Tech, Monday was the first day of practice in the afternoon heat.

“I’ve been very, very pleased with their effort,” Moore said. “Considering it’s hot and it’s been kind of a jump into the heat. We went from the morning to, ‘OK, now we’re done for the summer we’re going to afternoon practice.’ They handled it well, I thought.”

Moore believes it’s important that the players get at least somewhat used to the heat before they put the pads on.

“It basically reminds them how important it is to hydrate,” he said. “If they don’t do it, they’ll feel it the next day or the next two days. It’s a good chance for us to remind them before it gets extremely physical.”

Brotherton said he spent most of the week working on special teams, something the Lions didn’t do during summer workouts.

“I think we’ve extended it longer than we normally would because we haven’t had pads on,” he said. “We’ve taken the energy we’d use hitting each other and kind of gone a little bit longer and used it more as a conditioning purpose especially switching offensive styles and everything — no huddle and speed it up when we want to.”