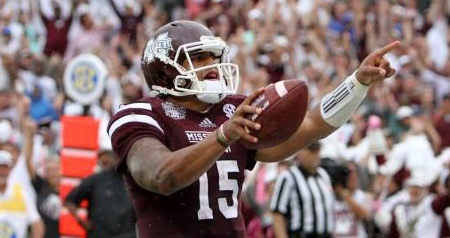 STARKVILLE, Miss. — Former Haughton star Dak Prescott had a hand in three touchdowns and accounted for 367 yards as the No. 3 Mississippi State Bulldogs knocked off No. 2 Auburn 38-23 Saturday afternoon in Davis Wade Stadium.

Already considered the frontrunner for the Heisman Trophy by some observers of the college football scene, Prescott completed 18 of 34 passes for 246 yards with one touchdown and two interceptions. He also rushed for 121 yards on 11 carries and two touchdowns.

With the indefinite suspension of running back Todd Gurley by Georgia amid an NCAA investigation earlier this week, Prescott will likely have even more support as frontrunner after Saturday’s performance.

“This team did a great job tonight,” he said. “I had one of my subpar games of the season, and I didn’t play very well. My teammates rallied around me and did a great job of making plays.”

The game was played before the largest crowd in Mississippi State history. The 62,945 in attendance included Prescott’s high school coach, Rodney Guin, his wife, Tracy, and their daughter, Maggie. Haughton principal Gene Couvillion was also on hand.

“They deserve just as much credit for this as the guys on the field,” Mississippi State coach Dan Mullen said of the crowd.

The Bulldogs jumped out to an early 21-0 lead before a scoring drought fraught with turnovers and struggles at the line of scrimmage allowed the Tigers to trim the lead to eight points.

A pass interference call on Auburn on fourth down in the fourth quarter gave MSU a chance to break the scoreless stretch. MSU secured a field goal after getting the first down and maintained the double-digit lead the remainder of the game.

Prescott was aiming for 6-foot-5 sophomore receiver De’Runnya Wilson on the play and they got the mismatch they wanted.

“We were going for the one-on-one,” Prescott said. “Just try to put it up in the air against a smaller a receiver and [Wilson] is either gonna get it or it’s gonna be a pass interference.”

In that instance, of course, it was the penalty they got.

Wilson led MSU with 72 yards and one touchdown on four catches.

Those forced turnovers and several big stops (including holding Auburn to six of 15 on third downs) were what Mullen said helped secure the game.

“Whenever we needed plays, people made plays,” Mullen said. “We trust our players to make plays.”

State is now only the fifth school in college football history to win three-straight games against top 10 foes.

Mississippi State is off next weekend and next travels to play Kentucky in Lexington on Oct. 25 with time and television arrangements for that contest likely to be announced Monday.