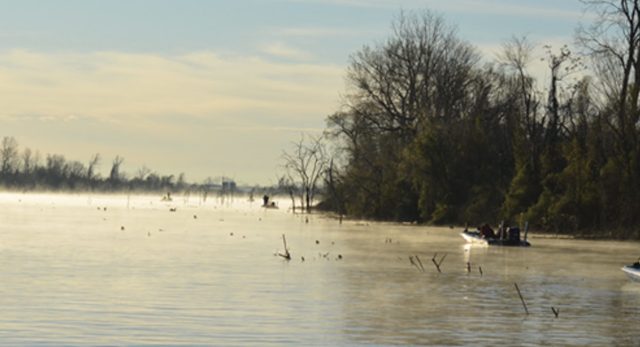 The Red River boasts a pair of Bassmaster Classics to its history, but this fishery will present a very different picture than those 2009 and 2012 events as anglers take on these storied waters for the St. Croix Bassmaster Central Open at Red River presented by Mossy Oak Fishing.

Competition days will be Sept. Thursday through Saturday with daily takeoffs from Red River South Marina at 7 a.m. and weigh-ins each day back at the marina at 3 p.m. Event coverage will be available on Bassmaster.com.

Bossier City’s Nick LeBrun and David Keith and Haughton’s Aaron Johnson are among 40 anglers from Louisiana competing. The field of 212 represent 26 states, Japan and Canada.

“You’re gonna see a totally different Red River than what it has been (in past years),” said Bassmaster Elite Series pro Caleb Sumrall, who cut his teeth on this fishery. “With the floods of six to seven years ago, a lot of sandbars have changed the current flow; it’s changed where the current gets into and where it doesn’t.

“Two years in a row, the Red River (overtopped) the spillways. I don’t think the fishery has recovered yet. I think we lost a lot of quality fish.”

Sumrall references the 2015 flood, in which El Niño inundated the region. With massive runoff coursing through the Red River, June saw this waterway peak at 37.14 feet — more than 7 feet past official flood stage and the highest recorded crest in 70 years.

The following spring saw locally heavy downpours with some areas along the Red River measuring more than 20 inches of rainfall. Cresting at just under 32 feet, the river washed away lots of shallow wood that had been a year-round mainstay.

Floodwaters also altered the passages into some of the backwaters, but Sumrall points to an upside. Recent years have seen a surge in hydrilla and hyacinth growth — two prominent bass habitat features.

“The vegetation is returning,” he said. “Hydrilla is king, and it’s very good to see that some of it is coming back to this system.”

Texan Lee Livesay, who won the opening Central Division event of the season on Ross Barnett Reservoir along with the Simms Bassmaster Elite at Lake Fork, agrees.

He noted that the vegetation — including hyacinth mats — will add a strong flipping/punching element to offset some of the hard cover loss. Vegetation also filters muddy water, so he’ll be looking for pockets of clarity.

Livesay visited the Red River nine days from the tournament’s start and found stable water conditions. The river currently stands just under 14 feet; a seasonally appropriate level that’s unlikely to change much before the tournament.

Short of any dramatic weather change, Livesay’s not expecting much current. Under normal conditions, the Red River is typically a low-flow waterway, but Livesay points to the flourishing vegetation as a summer sanctuary.

“This time of year, you want more current, but the current really only plays on the main river, not in the backwaters,” Livesay said. “So, instead of catching them on a squarebill on the main river, you might catch them flipping to fish that are tucked away under a mat or a laydown.”

Sumrall said the bass will be in a late-summer transition. Anglers will still see plenty of warm-season stationary fish, but the oxbows and other backwaters could find fish running shad. Sumrall and Livesay agree the field will employ a mix of flipping, cranking, frogging, topwaters and spinnerbaits.

“It’s going to be a shallow junk fishing 101,” Sumrall said. “I don’t feel like there will be one winning spot; you’ll need to piece it together. You may have one good area, but you’ll need several more spots.”

With tournament boundaries including Pools 3, 4 and 5, time management will play an integral role. Some will stay close and commit their days to Pool 5, from which the field will launch, while others will lock through to one of the lower pools.

“Those locks can burn you,” Sumrall warned. “If you get a big barge or a (large number) of tournament boats, you could lose a lot of fishing time.”

Since the floods of 2015-16, the Red River has generally produced more quantity than quality. Patrick Walters, an Elite champion and two-time Century Club entrant from South Carolina, won the 2018 Central Open — the most recent B.A.S.S. event on the Red River — with a three-day total of 30 pounds, 15 ounces.

With the fishery making post-flood progress, Sumrall predicts better numbers. He’s looking for a winning weight of about 36 pounds, with 10 pounds a day making the Championship Saturday cut.

“If a guy gets on the right deal, I can see him catching 16 to 17 pounds, but that will not happen more than once.”

Stressing realistic expectations, Livesay said, “One or two kickers a day is what you want to shoot for. You’re not going to catch a lot of big ones, but catching one 3-plus-pound fish is good on the river right now.”

Sumrall said consistency at any level will require diversity. He and Livesay agree the entirety of tournament waters could prove productive; however, game plans involving multiple areas will most likely deliver optimal results.

Sumrall’s advice: “Keep an open mind and don’t get locked into one thing. You’ll have to make adjustments on the fly.”

The tournament is being hosted by the Shreveport-Bossier Sports Commission.