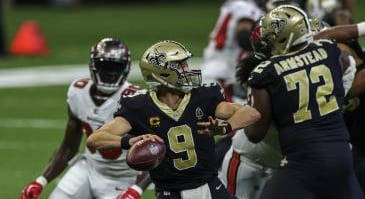 NEW ORLEANS — The long-awaited start to the 2020 NFL season may have kicked off in Kansas City last Thursday, but the highly anticipated showdown between Drew Brees and Tom Brady had all eyes focused on the NFC South matchup inside an empty Mercedes-Benz Superdome on Sunday.

With local authorities banning fans from attending the season kickoff in New Orleans, the Saints dispatched their division rival by the score of 34-23 while piped in crowd noise echoed throughout the cavernous enclosure.

Entering the game, both Brees and Brady combined for a total of 1,088 total touchdown passes, with the 41-year-old Brees holding the upper hand over the elder Brady, 43, by a count of 547-541.

One year behind Brady, who is starting his first season with Tampa after spending 20 with New England, Brees has begun his 20th NFL season and 15th in New Orleans after having been originally drafted in the second round (No.32) by the San Diego Chargers in 2001.

With his two additional touchdown passes, Brees (549) surpasses Peyton Manning for second-most multi-touchdown games in his career, with 166. Brees has now thrown for at least two touchdowns in nine of his 15 season openers with the Saints.

Despite holding nearly all NFL passing records including most career yards (77,576) and touchdowns, the 13-time Pro Bowler and two-time NFC Offensive Player of the Year still trails Brady in the number of Super Bowls 6-1, with Brees lone win coming in an MVP performance in 2010 at Super Bowl XLIV.