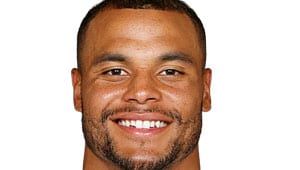 Former Haughton star Dak Prescott has had his share of detractors and critics during his three seasons as the starting quarterback for the Dallas Cowboys.

Prescott has said several times he ignores the outside noise. There may be a little less of it now.

Prescott went a long way toward quieting his critics Saturday night, guiding the Cowboys to a 24-22 victory over the Seattle Seahawks in an NFC wild-card playoff game at AT&T Stadium.

Prescott completed 22 of 33 passes for 226 yards and a touchdown with one interception, but he made one of the biggest plays of the game with his feet.

The Cowboys led 17-14 late in the fourth quarter and faced a third-and-14 at the Seattle 17, Prescott ran a quarterback draw for a 16-yard gain to the 1.

The Seahawks scored a TD and two-point conversion with 1:18 left. But Dallas caught an onside kick and ran out the clock.

“It’s really just a chance to keep going on, simple as that,” Prescott said in his postgame press conference. “Me and this whole team, we want to win it all. You can’t do that without taking care of the first one. A lot of excitement, but my goal is bigger than just one playoff win.”

It was Prescott’s first playoff victory and only the Cowboys’ third in the last 20 years.

Dallas will play at either New Orleans or the Los Angeles Rams in the divisional round next weekend.

“He’s just a rare guy,” Cowboys head coach Jason Garrett said in his postgame press conference. “His leadership, his toughness, just his way, his spirit, it’s like none other. Somehow, some way, he was going to figure this thing out for us. I thought he was outstanding.”

Seattle led 14-10 going into the fourth quarter. Ezekiel Elliott’s 1-yard TD run with 12:28 left put the Cowboys ahead to stay. It capped a nine-play, 67-yard drive that began late in the third quarter.

The game-winning drive was the 15th of Prescott’s career.

Prescott’s TD pass, an 11-yard fade to Michael Gallup, came with just 24 seconds left in the first half.

Prescott, the Cowboys’ nominee for the Walter Payton Man of the Year award, led Haughton to a 10-0 regular season in 2010 before going on to star at Mississippi State.

He has put on camps the last two summers at Haughton.