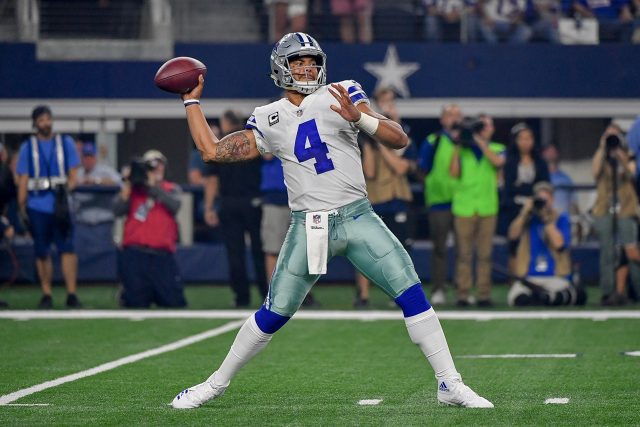 For the first time in three years, quarterback Dak Prescott and the Dallas Cowboys are in the playoffs.

A lot has transpired in Prescott’s life since the former Haughton star played in his last playoff game, a 30-24 second-round loss to the Los Angeles Rams in Los Angeles in 2018.

In April of 2020, his brother Jace, like Dak a former Haughton standout, died by suicide. Prescott subsequently became an strong advocate for mental health and talked openly about his own issues dealing with his brother’s death and the coronavirus pandemic.

In the fourth game last season, his fifth in the league, he suffered a season-ending ankle injury that required surgery and a long period of rehabilitation.

In March of last year, he signed a contract worth $160 million over four years. That included $126 million guaranteed with a record $66 million signing bonus.

In his first game this season, Prescott proved he was back, completing 42 of 58 passes for 403 yards and three touchdowns in a 31-29 loss to defending Super Bowl champion Tampa Bay.

During the regular season, he passed for 37 touchdowns, breaking the Cowboys’ season record held by Tony Romo. He was also nominated by his teammates for the NFL’s Walter Payton Man of the Year Award.

In his press conference Thursday, Prescott talked about what getting another playoff opportunity means to him in light of everything he’s been through.

“I think it just allows you to not take any moment for granted,” he said. “It seems like a long time obviously just putting everything that’s happened between there on the field, off the field — personal things, being taken away from the game to being able to be back here with such a great team.

“Just knowing what we have in front of us, knowing not only the talent but the brotherhood, the relationships, and the special bond that we’ve got, that’s going to be the factor that’s going to take us into this game and can carry us far.”

Prescott is also well aware of the expectations on him. Rightly or wrongly, he will be judged on how he and the Cowboys fare in the playoffs.

“I don’t know necessarily why people have labeled the word pressure as such a bad thing honestly,” he said. “It creates high expectations and high standards and it usually creates high results. For me it’s just about knowing who I am, staying true to that, preparing the same way that I do and that I have, trusting the people around me, trusting the playcallers in my preparation. And just going out there and playing the game that I love without any hesitation.”

This will be Prescott’s fourth playoff start. The Cowboys lost in the first round after going 13-3 in his rookie season in 2016.

Dallas missed the playoffs the next season then defeated Seattle in the first round in 2018 before losing to the Rams.

“All the hard work that you do is for these moments and for these times and for these games, and more than anything it’s about sharing it with the young guys and to the other guys that may not have been through the things that I’ve been through or been in the league as long,” he said. “Just make sure that they understand that, yeah, it’s a now mentality. You don’t come around great teams like we have very often top to bottom.”

Prescott is looking forward to playing in front of the hometown fans at AT&T Stadium.

“That’s one thing you can’t replicate is playoff football especially now at AT&T Stadium,” he said. “Having played two games here before and just knowing the excitement every single play,  to feel the excitement from warmups, really the time you show up getting near the game. Just in town, you can feel it; it’s something special. Excited to see Cowboys Nation just to come out and show out and be a big part of this game.”

He also expects the 49ers to be a challenge.