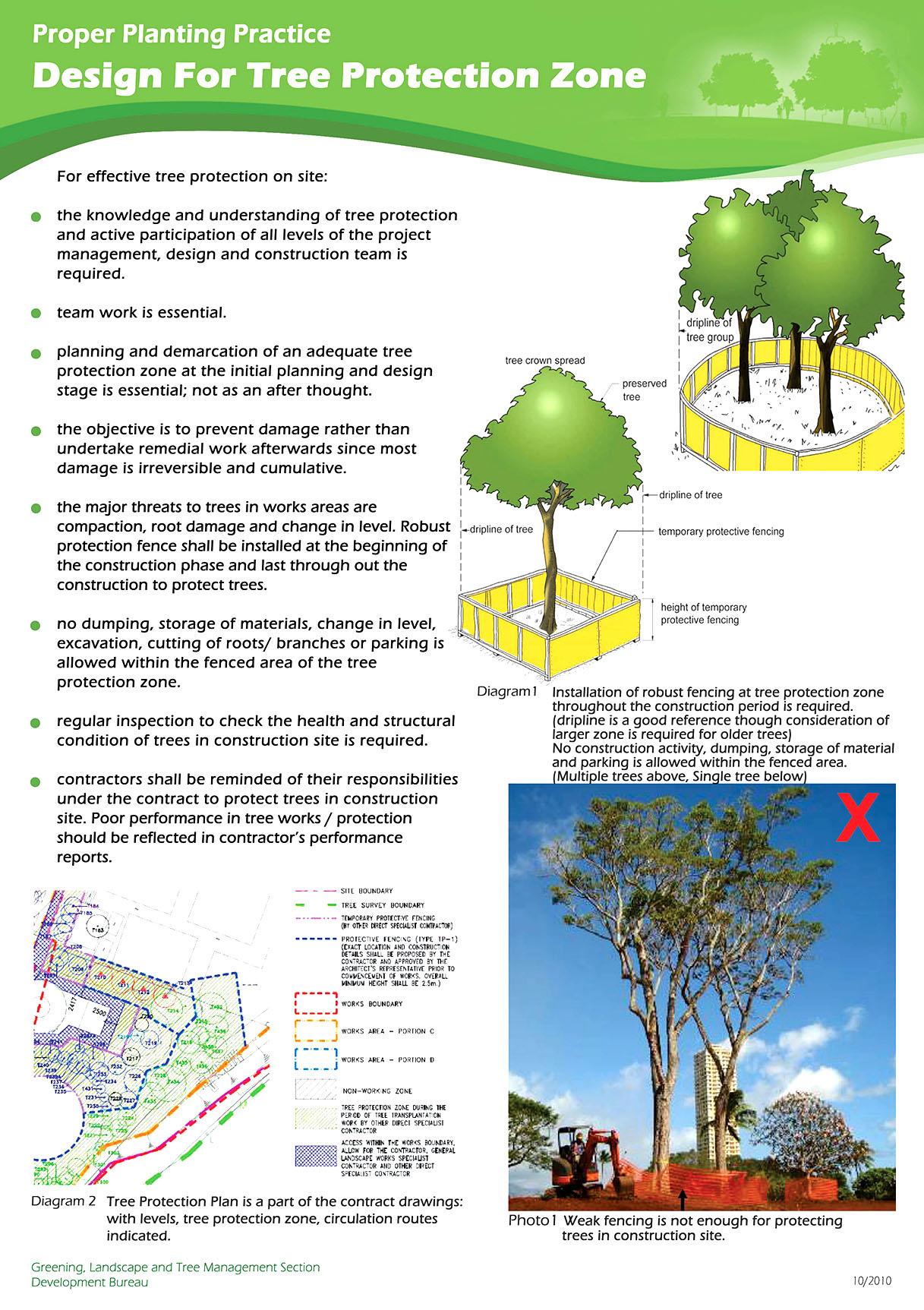 The major damage done to trees during construction is generally to their roots, so it’s a good idea to briefly look at how the roots of a tree grow.

A tree’s roots generally grow out in all directions like the spokes of a wheel, although this varies. Trees planted along a street, for instance, will produce most of their roots in the lawns away from the street rather than under the street itself. Growing conditions in the lawn areas are simply better for root growth than conditions under the street. The root system also extends a good deal farther out than the reach of the branches.

In addition, the overwhelming majority of a tree’s feeder roots – the roots that absorb water and minerals from the soil – are located in the upper 12 inches of soil. You can see this when a tree blows over and the exposed root system is shallow and flat like a plate. This makes the root system far more prone to damage during construction than most people realize.

The first step in saving existing trees is meeting before construction begins with your contractor, architect and anyone else who will be involved in the construction. It is a good idea to bring a licensed professional arborist into the process at this time as well. Forcefully stress how important preserving the health of the trees is, and come up with a plan to do it. Here are a few important points to consider.

Heavy equipment will damage tree roots by merely passing over the ground close to your trees – and the damage happens with the first few passes. The damage occurs when the roots are physically crushed or the soil is so compacted that the roots cannot function properly. Heavy equipment operators can also damage tree branches and trunks by hitting them, causing wounds that weaken the tree and may lead to decay.

Construct a fence or barrier around the tree to prevent equipment and vehicle injury to roots, trunk and low-hanging branches. The barrier should be placed out at least as far as the branches reach.

Try to avoid grade changes in the fenced area. Trees depend on the feeder roots in the upper 6 to 12 inches of soil. Lowering the grade in the area under the canopy of a tree, and consequently removing the shallow roots, will harm or kill the tree. This damage also makes the tree more likely to blow over in a storm.

On the other hand, if you raise the grade by adding soil, the tree may slowly decline in vigor or die because the roots cannot obtain the oxygen they need. This need for oxygen is a major reason tree roots are so shallow and close to the surface. It’s generally possible to add up to 2 inches of a sandy-loam soil without hurting your trees. Trees with damaged or buried roots often do not die immediately; in fact, they may live several years before declining.

Tree roots need to be protected when you excavate for water, gas and sewer lines. Start by considering the location of trenches. Avoid any trenching in the fenced area. If you cannot route the trenches far enough around the trees, the next best thing is to tunnel under the root system. Power-driven soil augers are often used for this purpose.

If you will be digging trenches, try to follow these rules:

– Position the trench as far away from the trunk as possible.

– Cut as few roots as possible, and cleanly sever roots if cutting is necessary.

– Backfill the trench as soon as possible, and don’t leave the roots exposed to air.

Insist that fences or barriers around the trees not be removed until after everything else is cleaned up and carried away from the construction site. Have all debris hauled away rather than buried or burned on the site. If you cannot have the trash hauled away, burn it in open areas downwind from your trees. Fires should be kept small and as far from live trees as possible. And check ordinances before burning to see if it’s allowed. Do the final leveling or grading of soil around trees with hand tools and not with heavy equipment that could break or damage the roots.