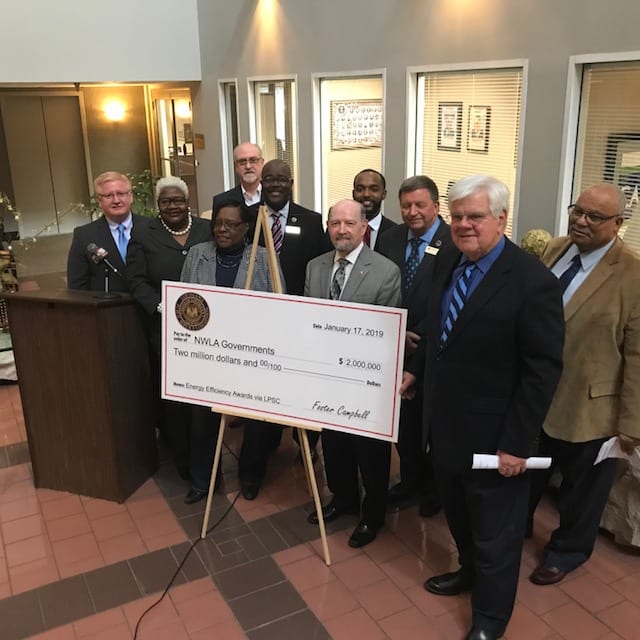 Local municipalities and public entities such as schools and libraries received a late Christmas gift Thursday.

“It’s not often that I am able to give out $2 million and I am very glad to do it,” Campbell said.

The money for the grants was generated by a small surcharge on electric bills paid by cities, parishes, and other political subdivisions served by SWEPCO, Entergy and CLECO. It equates to .38 cents per month, per the average household consumption of 1,000 kilowatt hours.

The recipients of Campbell’s efficiency grants for public institutions in Caddo, Bossier and Webster parishes are:

BPCC Chancellor Dr. Rick Bateman said this was a gift that will keep on giving as the grant will fund LED lighting enhancements that will reduce energy costs, saving “about as much as this grant every year from here on out.”

“We’re being asked to do more with less every year, so we’re finding ways to be efficient. This is one of those ways,” Dr. Bateman said.

“When we help (local public entities), they don’t have to go ask for more money. Money is tight in the state of Louisiana, especially in north Louisiana. South Louisiana is booming, north Louisiana is not doing as well and we need to do everything we can to help our elected officials where they can have efficient administrations and programs,” he said.

“We want Louisiana to be a progressive state, not a state in the past a state of the future. We want our future generations to think about solar and wind energy and natural gas,” Campbell said.

He added, “We’re saving money and energy and as long as we can talk about that, SWEPCO doesn’t have to talk about building a huge new energy plant that goest straight on your bill.”

Campbell said a second round of grants will be awarded by his office later this year.