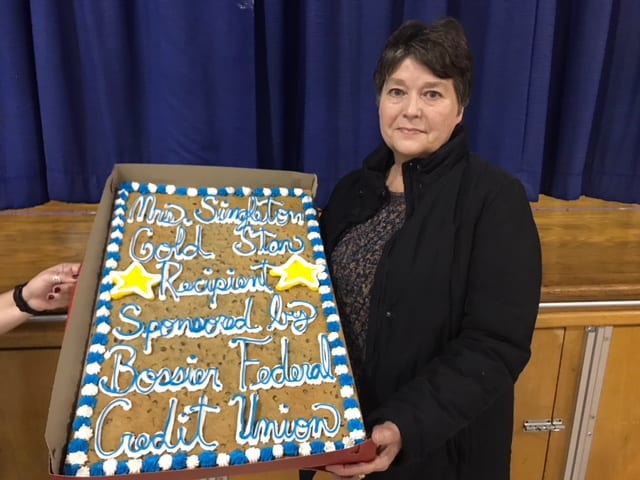 Ask anyone at Meadowview Elementary about Special Education teacher Janet Singleton and they will quickly say with a smile “you mean Queen Janet?” The beloved educator even has a crown and scepter to go along with the title.

Singleton has worked with Mild and Moderate students for an amazing 44 years in Bossier Parish; the last 33 of those at Meadowview. In that time, she has formed many relationships with and gained the respect of fellow teachers, administrators, parents and, most importantly, students.

Barbara Bland said, “Janet goes above and beyond for her students to learn. She teaches students with moderate to severe needs, but she meets them at their level to teach them life skills as well as academics. She cares about her students and their families and checks on them years after they have left her. Her dedication and commitment is unprecedented.”

Other colleagues gushed about Singleton’s quiet, humble manner, her incredible patience and the advocacy role she takes on for the students under her tutelage. 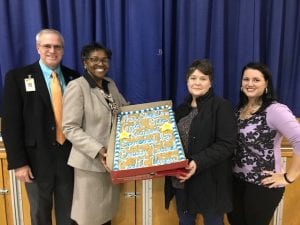 It is those sentiments, and many others, that led to Singleton being chosen as Bossier Schools’ Gold Star employee for November, an honor she was visibly stunned to receive at a school-wide assembly.

“I’ve always felt this was where I needed to be and where God wanted me to be,” she later said. “I will stand up for Meadowview any day of the week. It’s the whole building; the people I work with, that kind of thing. It is a family atmosphere and I love Dr. (Janice) Williams. I want to stress what a really good school this is.”

Singleton added she could not do it without two special ladies; paraprofessionals Diane Erlinger and Christine Golatt, who worked side by side with her for 20 years.

“If I didn’t have them I couldn’t do it, because they do everything I do,” Singleton added.

No doubt it takes a special gift to do what Singleton does. She has 10 children in K-5 that remain with her the entire day, from the time school starts to when they leave on the bus. It is tiring, but she said it is the success stories and relationships that make it worth it.

“We’ve had a lot of success stories, and not just academic, although we have had those; but they (her students) may learn to feed themselves or become potty trained.”

Some children have even gone from being non-verbal to verbal; one almost miraculously so overnight.

“One child started talking out of the blue!” she exclaimed.

As for the bond she forms with her students, Singleton said “We get them for more than one year, so you would be surprised by the relationships you get to have that other people don’t. Sometimes it’s two steps forward, then two steps back, but we celebrate every move forward.”

This time, Bossier Schools and Meadowview Elementary are celebrating Janet Singleton who can now add a shiny gold star to her tiara. After all, she is the Gold Star winner ‘and’ the queen.

Editor’s Note: Special thanks to Bossier Federal Credit Union for sponsoring the Gold Star Award, which is now in its seventh year. Know someone exemplary that works for Bossier Schools and deserves a Gold Star? Nominate them by going to https://bit.ly/C1Gvhr