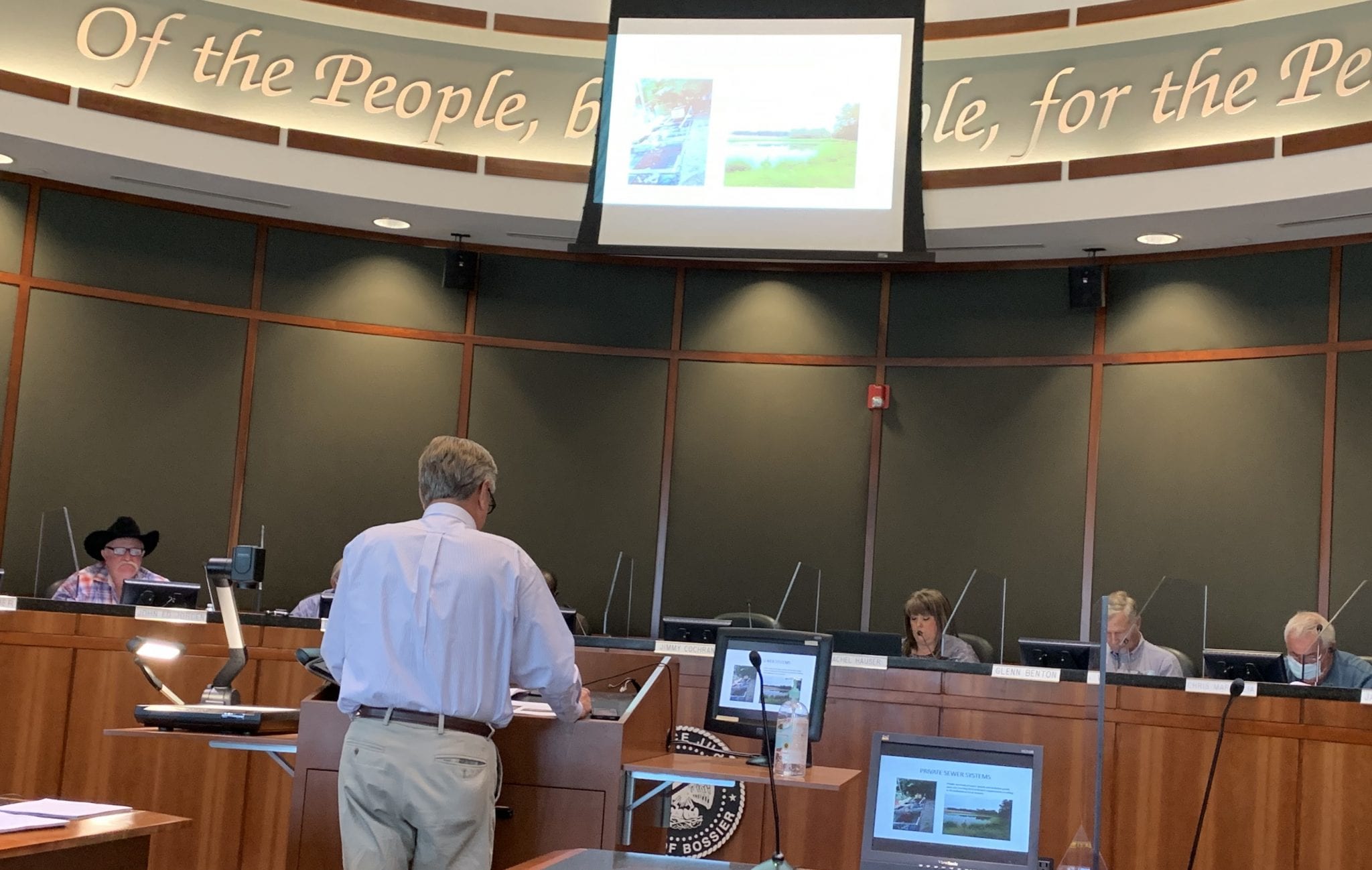 Bossier Parish residents and businesses will be seeing an increase in their sewerage/water bills as costs of construction and maintenance continue to rise, making rate adjustments necessary.

Police Jury members, during a session of the Consolidated Waterworks/Sewerage District board Wednesday, voted to hold a public hearing on the issue at the Dec. 16 jury meeting.

“We have reached a point where we cannot continue to fund the operations of the sewerage and water system at the expense of other infrastructure needs in the parish,” Ford said. “From an environmental, public health and growth standpoint, the system has to generate enough revenue to be self-supporting.”

Customers in Consolidated Waterworks/Sewerage District No. 1 were brought into the parish’s new $55 million system from approximately 40 small wastewater treatment systems within the district, serving mobile home parks and subdivisions.

Many of those systems were too small to adequately provide environmentally safe treatment and disposal. Some were violating quality standards set by the state Department of Environmental Quality (DEQ) and many others were on the verge of total collapse.

“The State made it known what a terrible environmental impact these mostly abandoned and dilapidated systems were having on Bossier Parish.  The Police Jury agreed.  The State pledged $15 million in investment and another 40 million in low interest loans to remedy the problem. Over the last five years, the Parish invested over $10 million to do the same,” Ford said.

Included in the system is a state-of-the-art $12 million wastewater treatment plant located on the Red River at Cash Point. The plant, designed to handle larger inflow in the future, handles effluence that once was discharged by the smaller systems into local streams and waterways like Red Chute Bayou, Fifi Bayou, Flat River, Williams Bayou, Flag Lake and Willow Chute Bayou.

Environmental and public health concerns were first recognized in the 1960’s and 1970’s with the rapid development along U.S. Hwy. 80 east of Bossier City. In the early 2000’s the Police Jury began to study the possibility of creating a sewerage district. In March of 2004, the first version of the district was created.

By 2010, the Police Jury recognized the same problem was developing between Bossier City and Benton in an area with even less capacity to handle the massive development. Out of these circumstances the Consolidated Waterworks/Sewerage District No. 1 was created, and subsequently enlarged.

Collecting all sewerage flows and treating at one location on the Red River (the best place to discharge the treated effluent) and removing treatment facilities in subdivisions helps the Parish address environmental concerns and public health issues. The CWSD also helps provide a better quality of life and increased property values.

“With the help of the $15 million investment from the state through capital outlay, and with the additional $10 million from the Police Jury over the past five years, we’ve addressed environmental and public health concerns,” Ford said. “What we’ve done has also put us in compliance with DEQ and EPA regulations. That’s very important.”

While the parish has already spent roughly $10 million to subsidize the system, plans are to continue providing additional operating funds for the next three years.

Anticipated revenue for the system was initially based on an average of $42.50 per customer, but roughly 2,000 fewer users than projected has lowered that actual average to $37.  Water and sewerage service are expected to increase with growth in residential and commercial development in the parish, but current operational expenses must be maintained.

“Current rates simply have not covered costs and we can’t continue to fund the system at the expense of other major infrastructure projects,” said Ford. “We don’t want to risk slowing economic development or impacting property values. We have to take steps to make the system self-supporting.”