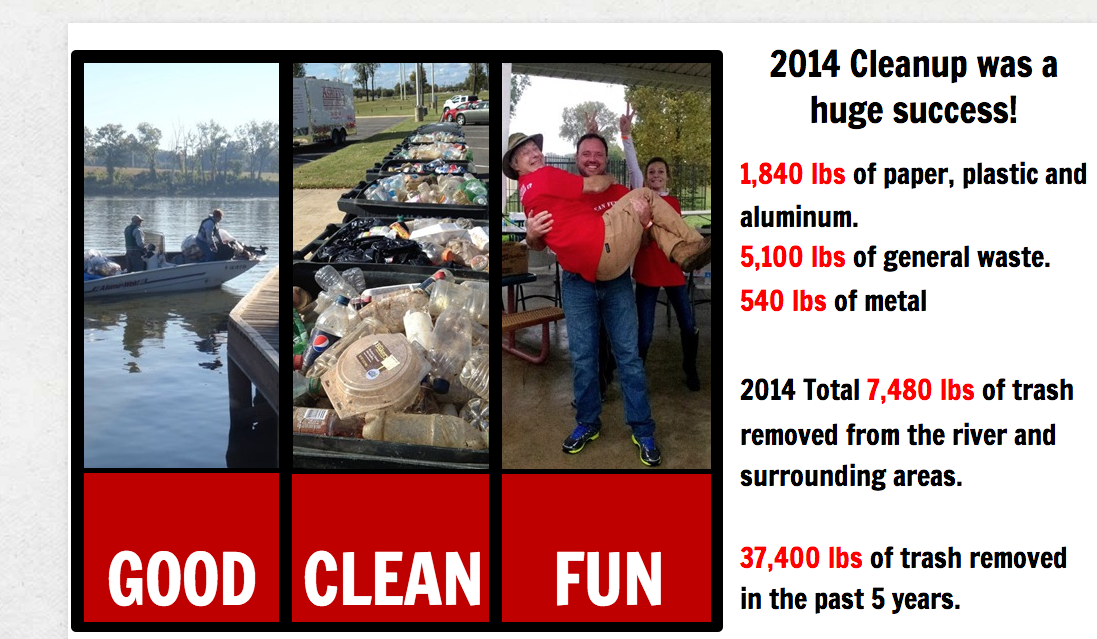 A local couple believes that when it comes to the Red River: “If you clean it, they will come.”

Adam and Lisa Willard are the organizers of the Red River Cleanup that was held in November. The event saw 292 volunteers come out on that day and remove a total of 7,480 lbs. of trash from the Red River and surrounding areas.

According to Lisa, the group’s mission goes beyond cleaning local waterways to include sewing the seeds to ignite the public’s pride in their community.

The event saw volunteers take that to heart as they showed up at 5:30 a.m. and included a helping hand from the Bossier Sheriff’s Young Marines, Caddo Magnet School and Camp Minden Youth Challenge Program among others.

Buffalo Wild Wings donated food to volunteers and sponsor Advance Air also grilled. The event featured a chicken wing eating contest and the Trash Sign Contest — volunteers find the coolest, strangest or most unique trash in hopes to win a prizes such as gift certificates, hotel stays, a Yeti Cooler and more.

“it’s not just about getting dirty. When we’re doing something that helps our environment, we want to reward our volunteers as much as we can,” said Lisa.

The pair raised $2,100 for the event, leaving a $400 deficit. However, fate had other plans for the group as AT&T’s regional director David Aubrey surprised them with a check for $2,500.

Now, they will take the next step and apply to become a nonprofit.

“We were having this surreal moment. Some of our sponsors had to kick in extra money to cover a deficit and it was nice to realize we didn’t have that deficit,” said Lisa.

The pair wants to thank all their sponsors — AT&T, Garrison Electric Company, Advance Air Conditioning and Heating, Arkansas Canoe Club, Ashley’s Building and Construction, Sportspectrum and the Red River Waterway Commission — for their support over the years and bringing the cleanup to this point.

The seeds of the Red River Cleanup were sewn five years ago when the couple took part in a recreational float five years ago and found it was like “paddling through a landfill.”

“We felt like we needed to do something in our own town and we had no idea it would grow to the size it has. It has brought the community together and opening eyes and educating both the young and old,” said Adam.

He noted the importance of education by acknowledging that it can be difficult to notice the various pieces of trash choking the river from afar.

“It is hard to see the pollutants in the river when going over a bridge at 45-70 miles per hour. That’s where we need the public to see firsthand how bad it is,” Adam explained. “If you’re littering you’re destroying your own resource. We need open everyone’s eyes.”

“When you throw something out of your car, it’s going to go into the ditches and then it will make its way to the river,” added Lisa.

The couple’s love of water and the outdoors began long ago. Adam said his grandfather instilled in him a connection as a child.

“He put me and my brother on the Ouachita River with fishing poles and lunch and away we went. We were always on the water and have a passion for the outdoors.”

Lisa grew up on a beach in Ft. Lauderdale, Fla.

“When I came here, I searched for the water. I just think the Red River is such a great resource.”

Even though the cleanup has picked up more than 37,000 pounds of litter and trash throughout the past five years, Lisa noted there is still a lot of work to be done.