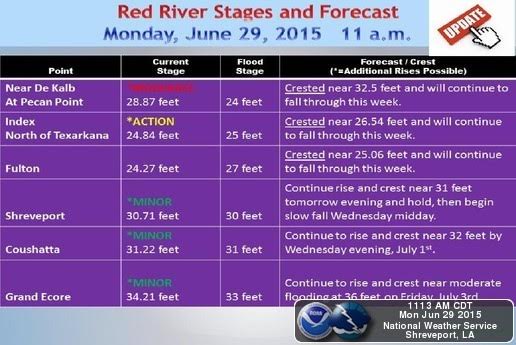 National Weather Service forecasters have changed their prediction on the Red River’s crest that is expected to reach the Shreveport-Bossier area this week, and the change is good news for flood-weary residents.

During Monday’s operational briefing at the Bossier Office of Homeland Security and Emergency Preparedness, NWS hydrologist Craig Ross said the expected crest had been lowered to 31 feet, down from the 32.5 feet originally predicted.

“We’ve lowered the crest level on the Red River to 31 feet in Shreveport and 32 feet down river at Coushatta,” Ross told parish, state and federal officials attending the briefing. “The flood wave is currently moving through the Spring Branch Ferry and is expected here Wednesday.”

One factor in lowering the predicted level is less than anticipated rainfall in the Red River basin over the weekend, forecasters said. A cold front that moved through the area failed to deliver heavy rainfall as expected. Forecasters also said no significant rainfall is expected over the next few days.

Although a lower crest is good news for now, NWS forecasters cautioned residents to remain watchful for the next few weeks. Reservoirs to the north are still near or beyond capacity, with Lake Texoma reporting a 106 percent level. The lake’s spillway is being overtopped by one foot of water, Ross said.

The NWS is also keeping an eye on the tropics during this hurricane season.

“Another tropical storm like Bill in the Red River basin with the associated heavy rainfall could still cause serious problems downstream,” Ross said.

Ross told officials the Red River might be closed to recreational boating and fishing for the duration of the summer because of the high water. With reservoirs to the north needing to discharge in order to reach conservation stages, water levels could keep boat traffic off the river until Labor Day.

And, forecasters predict it will be a different Red River that emerges from this flood event.

“The river will have new sandbars and navigational aids could be either lost or destroyed,” Ross said. “It will be a new river in some aspects.”