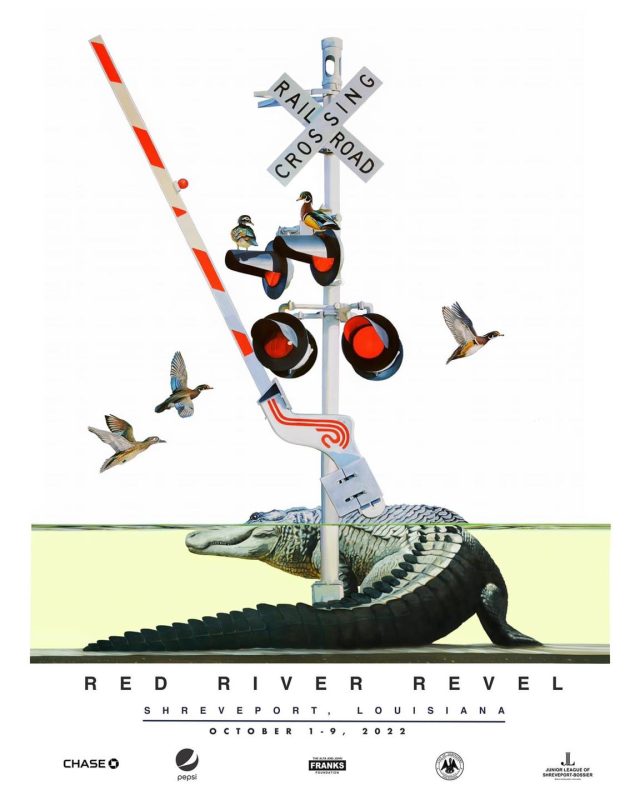 The Red River Revel held a small reception to reveal the new artwork with its Governing
Board, Festival Production Committee, sponsors, and stakeholders on Tuesday evening
at Central Artstation. At the end of the event, the primary sponsors of the Revel were
presented with the first five festival posters printed, each one signed and custom framed
by the artist. “I wanted the artwork to be an extension of my own work but also a
reflection of my experience as a Revel artist,” Mullen said. “I focused on the railroad
because it is so intertwined with the festival locations, and the sights and sounds of the
Revel. I wanted to bring these elements to the forefront combined with the wildlife and
landscape of Louisiana. I feel like this piece is a love letter to Louisiana but also the
train tracks surrounding festival plaza that I’ve come to know so well.”

Mullen’s paintings are a contemporary take on southern wildlife and culture, heavily
influenced by antique field guides and early scientific illustration. Using a realist painting
technique, they draw attention to anatomy and the juxtaposition of environments both
organic and man-made. There is an underlying tension of balance through transition.
The artist carefully contextualizes the unique natural history of the south to convey
underlying themes of nature, culture, and space. Since Mullen’s debut solo exhibition,
held in the gallery room of the Louisiana State Archives, his work has been exhibited in
gallery spaces in Los Angeles, Miami, San Francisco, and internationally. His paintings
are part of various private collections around the world.

“This poster is a clean and modern design that sits in stark contrast from previous Revel
posters,” said Revel Executive Director Logan Lewis. “Working with Chase has been a
pleasure, he really understood the assignment. From development and feedback, to
being willing to travel to Shreveport for the release event, and even for allowing us to

use some of his artwork for other applications to set the theme, he has excelled with this
project and we couldn’t be happier with it.”

Haughton’s Jason Scott to be inducted into the Military Rodeo Cowboy...