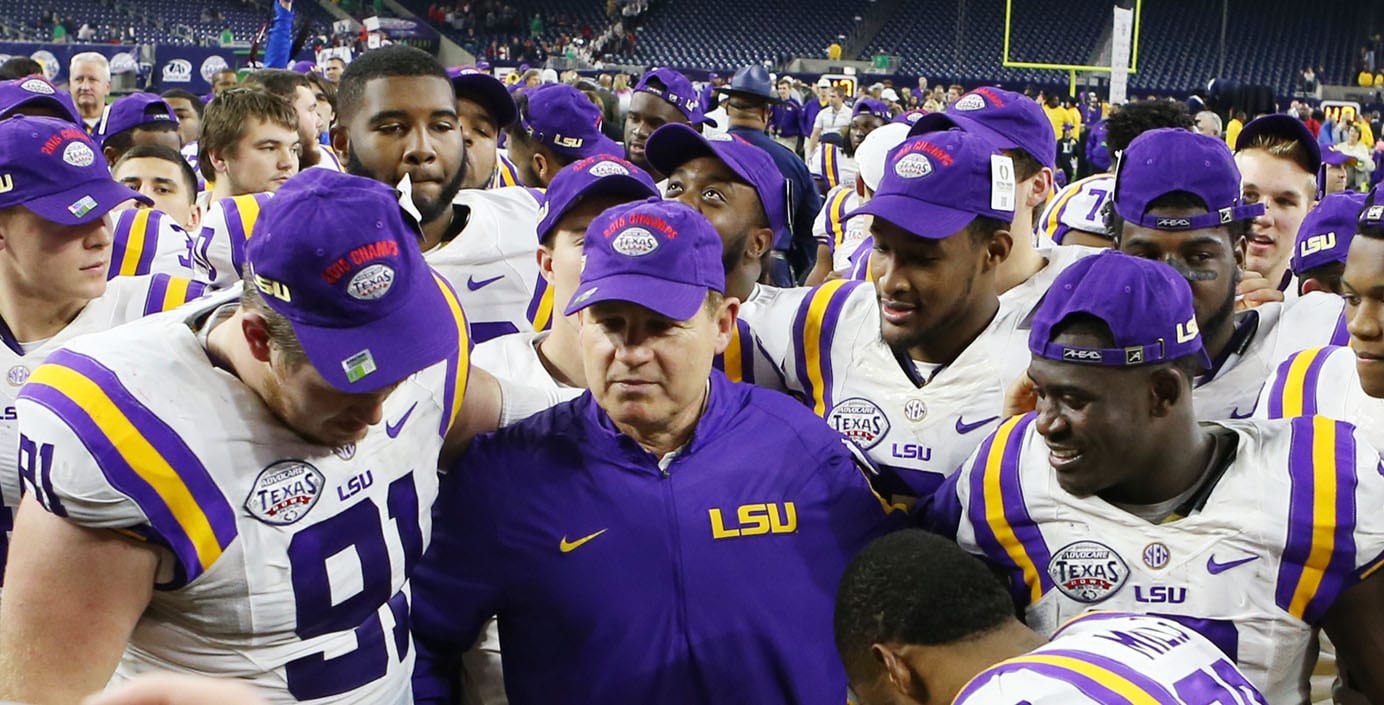 After reports by the Baton Rouge Advocate and other media of Miles’ firing, LSU confirmed it on its website Sunday afternoon. Defensive line coach and recruiting coordinator Ed Orgeron will take over as interim head coach.

“Decisions like this are never easy ones to make,” LSU Vice Chancellor and Director of Athletics Joe Alleva said on the website. “Coach Miles has done a tremendous job here and he’s been a great ambassador for our university, which makes this even more difficult.

“However, it’s apparent in evaluating the program through the first month of the season that a change has to be made. Our commitment to excellence and competing at the highest level is unwavering, and our goals for the remainder of this season haven’t changed. We have an obligation to our student-athletes to put them in the best position to have success on the football field each week and we have great confidence that coach Orgeron will do just that.”

Orgeron, who joined Miles’ staff in 2015, was the interim head coach at USC for the final eight games of the 2013 season, posting a 6-2 record. He is a graduate of Northwestern State, where he was a football standout. Orgeron served as head coach at Ole Miss from 2005-07, posting a 10-25 record. He has been recognized as one of the nation’s top recruiters.

Offensive coordinator Cam Cameron has also been relieved of his duties.

Miles’ firing comes in the wake of LSU’s 18-13 SEC loss to Auburn Saturday night in Auburn, Ala. The Tigers appeared to have won the game on a 20-yard touchdown pass from Danny Etling to D.J. Chark on the final play of the game. But officials ruled LSU did not get the play off in time after they marked the ball following a penalty. Miles said he agreed with the ruling in his postgame press conference.

LSU, ranked No. 5 in the preseason, dropped to 2-2 on the season and 1-1 in the SEC. The Tigers host Missouri Saturday at 6:30 in Tiger Stadium.

According to media reports, Miles came close to being fired after LSU finished the 2015 season 9-3. But after the Tigers defeated Texas A&M in its final regular-season game, Alleva announced Miles would remain coach. There was an outpouring of support by LSU fans during the game. LSU went on to rout Texas Tech 56-27 in the Texas Bowl.

Under Miles, LSU has consistently had recruiting classes ranked among the best in the nation. But as successful as he’s been, Miles has been criticized for his conservative play calling and clock management. LSU is also 15-11 in the SEC over the last three-plus seasons.

Cameron was in his fourth season as LSU’s offensive coordinator after serving as the head coach at both the college and pro levels. He was instrumental in recruiting former Parkway star Brandon Harris to LSU. Harris, a junior quarterback, was benched in favor of Etling in the second game of the season against Jacksonville State after starting every game in 2014.

Cameron has taken some of the criticism along with Miles for LSU’s offensive woes.

According to the Baton Rouge Advocate, tight ends coach Steve Ensminger will take over as interim offensive coordinator. Ensminger is a former LSU quarterback who played under McClendon from 1976-79.

Ensminger joined the LSU staff in 2010. Before then, he had stints as an offensive coordinator at Texas A&M, Clemson, McNeese State and Louisiana Tech. He has also coached at Georgia and Auburn as well as at the high school level.