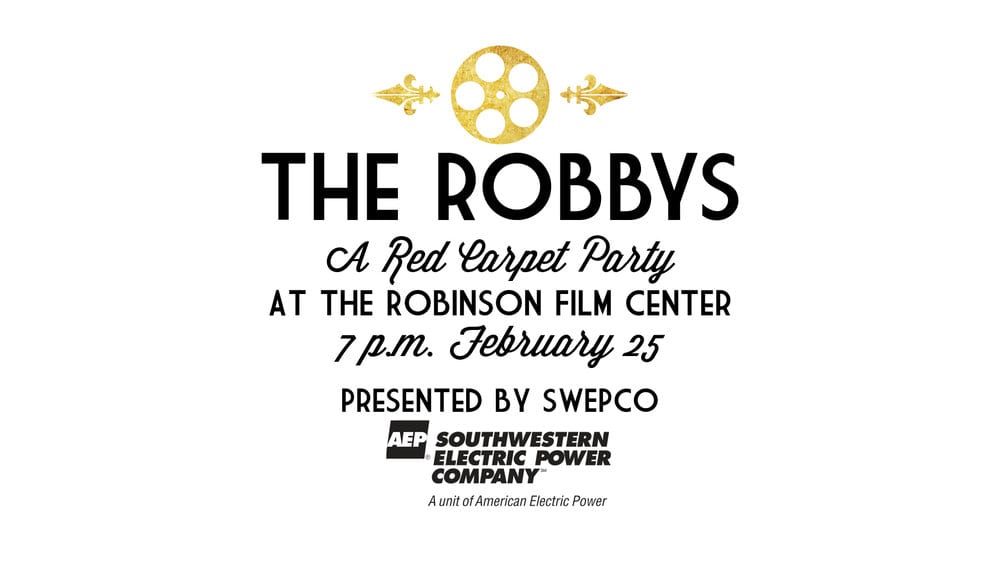 Hollywood meets Louisiana at Robinson Film Center’s The Robbys, the nonprofit’s glamorous red carpet party held annually on the eve of the Oscar Awards. The evening is presented by title sponsor SWEPCO.

Mark your calendar for February 25, 2017 to help RFC celebrate the best in Louisiana cinema from one tip of the boot to the other.

The down south party will begin as you arrive on the red carpet in your Hollywood best. Waiting just inside are the swamps from Beasts of the Southern Wild where you’ll find plenty of seafood gumbo, shrimp rémoulade and homemade hurricanes to kick the night off right.

Then head inside to the Street Car Named Desire piano bar, where you’ll hear the sounds of New Orleans and feel like you’re just down the street from Stanley and Stella’s French Quarter apartment. Don’t forget to grab a Sazerac and pick up a catfish poboy to enjoy while you’re mingling with other revelers.

Next head to the land of Steel Magnolias where we’ll dance the night away, just like Shelby’s wedding guests. Munch on some Natchitoches meat pies, sip on some spiked sweet tea and grab a nice piece of Aunt Fern’s red velvet armadillo cake. That’ll fuel your dancing feet all night long!

Not to be outdone by the Oscar ceremony happening the following day, RFC will be handing out their own awards like Best Arrival, Best Dressed, and Second Sexiest Person Alive! And last but not least, you’ll have a chance to bid on Louisiana-themed auction items like a trip to the Steel Magnolias House in Natchitoches, a down-home Louisiana meal prepared by your own private chef, and even a trip to the other L.A. to rub elbows with Hollywood celebrities.

While you’re having the time of your life, you’re also helping strengthen Shreveport’s only nonprofit art house movie theater. You’re allowing RFC to continue to bring world-class cinema to Shreveport all year long. You’re making possible the dozens of film series that are catered to groups like families, senior citizens, and even science geeks! And you’re funding education programs like Summer Film Camp, school workshops and our Teen Film Council.

While celebrating the best in Louisiana film, you’re also ensuring the future of the best theater in Louisiana.