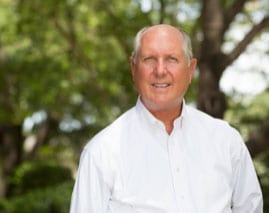 Benton resident Robert Mills has announced his candidacy for the Louisiana Senate in Dist. 36, to be voted on in 2019.

Born and raised in Shreveport, Mills graduated from Byrd High School then trekked south to LSU where he earned his BS in Business Administration (’76). With diploma in hand, he was ready to start his real education and career in the oil, gas, and timber business.

For the next 40 years, Mills has always called NWLA home, even while working on projects in Canada, Mexico, Guatemala, Venezuela, Indonesia, China, and India. But, it’s in Baton Rouge, in the State Senate, where he hopes to “complete his most important project.”

“I’m running for State Senate because there’s a leadership void and a lack of urgency on the part of career politicians. We’re sluggish while other states are aggressive. I want to get Louisiana back on track, off the bottom, and moving in the right direction,” Mills said.

Mills says his strong work ethic was honed that trait as a Petroleum Landman at Arkla Exploration Company, Placid Oil Company, Clarick Exploration Company, L.R. Resources II, and as an Independent Contractor. His talent was spotted and recruited to become a crude oil purchaser. In 1991, Robert joined Falco S & D as a crude buyer, and, in 1993 Calumet Lubricants Company lured him to join their team as Manager of Supply & Distribution. His rise continued unabated. Named Vice President in 1995 and Named an Executive Officer of the Partnership in 1997. Since 2015, Robert has been the Vice-President Crude Oil Supply, South, where he is responsible for the purchase, transportation, and timely receipt of 70,000 barrels of crude oil and some 24 million cubic feet of natural gas per day, 365 days a year.

“Businesses face a constant threat of long-term frivolous lawsuits and over-regulation in Louisiana. This climate might be good for trial lawyers, but for the other 99.5% of our citizens, it’s a real obstacle to creating jobs, raising a family, and building a future in our state,” Mills said.

Mills continued, “My family goes back generations in northwest Louisiana. They worked the land, passed down traditions, and always hoped to see our area thrive. So, as my business career winds down, I can’t sit on the sidelines and watch our district continue to struggle. I’m running to honor our past and plant a flag for our future.”

Valuing the importance of education and training, Robert has dedicated his free time to the Shreveport Bossier Business Alliance for Higher Education, VOA of Northwest Louisiana, and tutoring 3rd and 4th graders at J.S. Clark Elementary School. He also serves on the board and executive committee of the Shreveport-Bossier Committee of 100.

Robert is married to Sheila Allen Mills , a retired successful land manager in her own right. They are parents to four children. Robert serves on the Board of Trustees and on the Global Leadership Team for First United Methodist Church in Shreveport. Through fellowship and guidance, Robert has had the privilege of organizing the Christian Leadership Luncheon series aimed at helping young and emerging business leaders in the area, as well sponsoring a Haitian orphan.

“At 18, I registered to vote as a Republican. That’s 47 years of consistent, conservativism. Period. My record has and will always resemble my principles. I will fight for our families and future. I will serve you, not special interest groups,” Mills concluded.