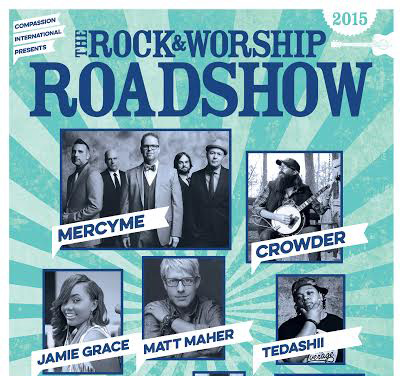 Bossier City – Are you ready to rock?

The 7th Annual Rock & Worship Roadshow is headed to the CenturyLink Center Sunday, March 29, and will feature a diverse group of Christian music artists, all with a mission to share the gospel through voice and lyrics. Show time is 6 p.m.

Headlining the Roadshow are tour founders MERCYME. They will be joined by Crowder, Matt Maher, Jamie Grace, Tedashi and Group 1 Crew. It will also introduce tour newcomer artists I Am They and Jon Guerra. Shaun Groves will be the guest speaker.

Barry Graul of MercyMe said they wanted the show to be family-friendly and fairly diverse in the show’s lineup so everyone could come and enjoy at least one (if not all) of the acts.

“For us, it’s like traveling with family,” Graul said. “We all get together for one purpose and it’s pretty awesome.”

Since their debut in 2001, MercyMe has sold over seven million units in CD and DVD sales, garnered 26 No. 1 multi-format Christian radio singles. The Dove Award-winning, Grammy-nominated group is known for such hits as “I Can Only Imagine,” “Homesick,” “So Long Self” and “Word of God Speak.” In 2009, Billboard named MercyMe’s “Word Of God Speak” the No. 1 Song of The Decade and the group the No. 1 Christian Songs Artist of the Decade, with an additional No. 1 as the Christian AC Song Artist of The Decade.

MercyMe made history when “I Can Only Imagine” surpassed one million digital downloads, making it the first song in Christian music to go platinum in the digital domain. The song has now surpassed two million downloads.

As an experienced artist, Graul said they often like listening to the up and coming generation of musicians. One of those being Jamie Grace.

“She’s very exciting to watch and very captivating. You can tell she really loves what she does,” he said.

Singer-songwriter Jamie Grace, 22, made her debut into the industry with the help of multiple GRAMMY® winner TobyMac. Her debut single “Hold Me (feat. tobyMac)” was a No. 1 radio single and has been certified Gold by the RIAA.

Hailing from outside of Atlanta, she was diagnosed with Tourette Syndrome at age 11 and has since traveled the country sharing her story and faith through music and speaking. Jamie Grace has since graduated from Point University with a degree in children’s ministry. Her sophomore album Ready To Fly is available now and features the No. 1 hit singles “Beautiful Day” and “Do Life Big”.

Her inspiration comes from life, fans she meet and listening to good music from all genres.

“I just love talking about Jesus and encouraging others and making others smile,” she said.

Grace said standing backstage and seeing the crowd worship is something incredible to witness.

“You’ve got young people, old people, white people, black people, hispanic people all together under one roof,” she said. “Years ago we couldn’t worship together, but now we’re coming together for one reason. It’s a huge blessing.”

Both musicians encouraged concert attendees to bring a friend or family member and share the experience together.

“If you love the Lord, there will definitely be an incredible evening for us to worship together,” Grace said. “If there’s someone who is not a Christian or doesn’t know Jesus, bring them. This is a night for Christians to be encouraged.”

Graul, agreed, adding that attendees should come expecting to worship with artists who are sharing what’s on their hearts in an exciting, untraditional venue.

“A church environment, to a non-believer, is a little intimidating. This [arena] is a neutral ground and they probably feel more comfortable,” Graul explained. “The first thing I’ve noticed about the roadshow is that people will stand on their feet the entire night. That’s amazing to me. It’s exciting from the very beginning to see people worshiping in the crowd, knowing that someone may be hearing the gospel for the first time.”

Since The Rock & Worship Roadshow first kicked off in 2009, the tour has performed more than 150 shows to an audience of 1.2 million people.

“The success of The Rock & Worship Roadshow over the last six years has been incredible,” shares Brian Seay, executive producer of the tour. “The quality and variety of the artists in our 2015 lineup ensures that we will continue to provide the entire family – parents and kids alike – with an unforgettable evening of ministry and music presented by Compassion International.”

General admission is $10 per person at the door. VIP tickets are also be available for $50 per person and will include a Q&A with select artists, early entrance for premium seating, an exclusive tour t-shirt, a VIP laminate and more.

Compassion International, the world’s largest Christian child development organization serving more than 1.4 million children, will again be the presenting sponsor of the tour.

For more information or tickets, call (800) 965.9324, visit itickets.com or www.theroadshowtour.com.