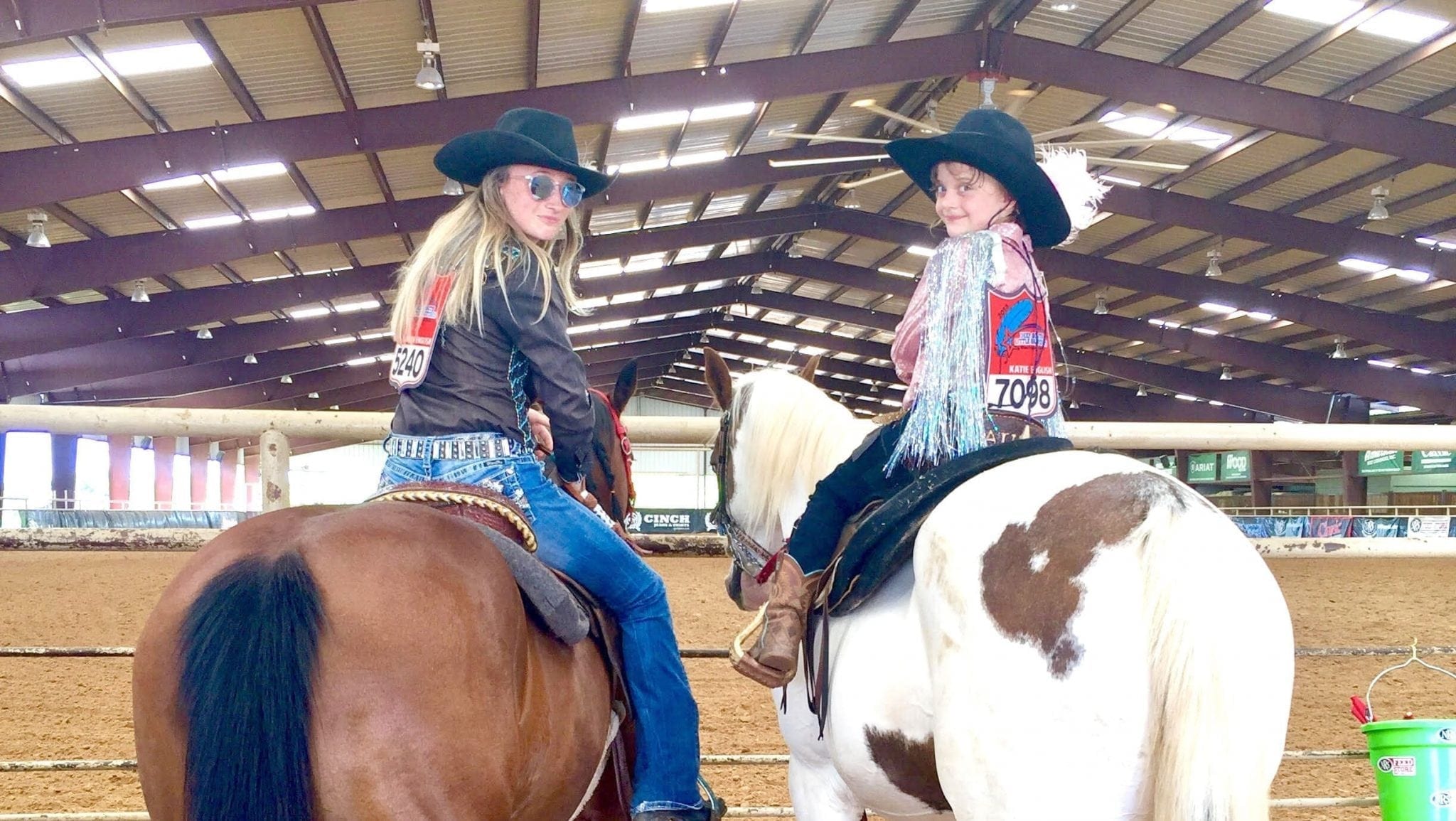 Sisters Landan and Katie English have both qualified for events in the upcoming National Finals Rodeo to be held the second week of July in Guthrie, Okla.
Landan, 13, will be competing in barrel racing while 6-year-old Katie rides in pole-bending.
The finals are being held at the Lazy E arena for the National Little Britches Rodeo Association with the English girls representing the Cajun Little Britches chapter.
Both girls have been riding from a very early age thanks to their mother Bobby who was an accomplished rodeo athlete both as a youth and an adult.
In order to qualify for the Finals, a rider must have placed in the top seven at least five times throughout the year.
Katie will be riding Sassy, a 15-year-old arab/paint mare, while Landan competes on Boom Boom, a strong and fast 7-year-old quarter horse mare.
Boom Boom was discovered in Texas on a kill lot by a trainer named Leslie Fornes. Through social media, Bobby English watched the progression of the little bay mare’s training and was dead-set on picking her up the second she came up for sale.
“From a coffin to a pen,” Bobby remarked. “She was 4-years-old when they got her and they said she was a bronc! They got her and they trained her in a cornfield next to their house and they showed videos of her on Facebook.
“I just thought ‘I like that horse. . . . that is a nice little horse!’ And then they put a novice rider on her and she took the novice rider through the pattern even though the kid is just all over the place. So we drove in the snow to Forney. Texas. Ice covered everywhere. I didn’t care, we were going to get that horse. We hurried up so she didn’t sell it to someone else.”
Landan at first did not like Boom Boom at all.
“She wasn’t the horse I had,” Landan said.
But with some practice, Landan began to feel the power that the new horse had and what they could be capable of. “And now I’ve won a saddle on her!”
Bobby nominated Boom Boom to be the Classic Equine of the Year at the Finals Rodeo.
“They’re wanting me to put in 200 words or less, why?” Bobby shrugged and gestured toward Boom Boom, who was standing in her stall with Katie sitting on her back, barefoot and bridleless. “She takes care of both of these kids.”
Katie rode Boom Boom also, before the family got Sassy.
“She (Boom Boom) goes from itty-bitty novice rider, Katie, up there, balancing on the reins, pulling on her, body’s all over the place and she’s taking her through the barrels,” Bobby said.
“She can do whatever she wants. She’s a big horse! But she takes care of her, and then she goes in there and gives 110 percent for Landan. She’ll do whatever you want her to do. This horse is one of those special ones.”
Landan has been competing since she was in lead-line classes, but only became an aggressive competitor over the last couple of years. Boom Boom has helped her rise in the year-end point standings quickly in her division, where she sits tied for 12th place in the nation.
The English girls will leave for the competition on July 8. If either of their first two rounds are good enough to qualify for the final races, they will again in the ‘short go’ on Sunday, July 15.