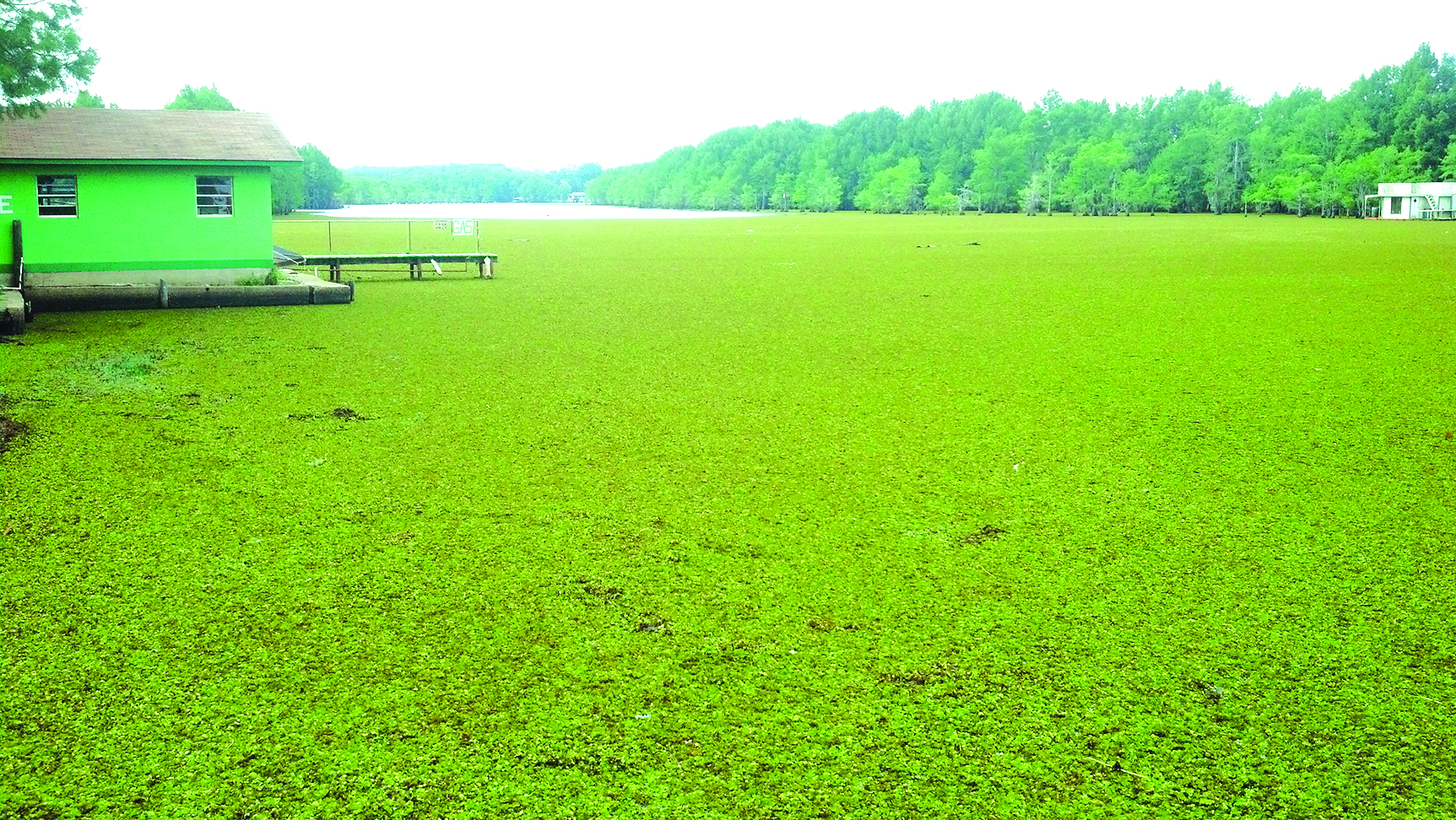 Giant salvinia is not only increasing its presence in area waterways, but it has become increasingly frustrating for homeowners.

Bossier Parish residents living along the northern shores of Cypress Black Bayou say the amount of giant salvinia is staggering. Local and state officials held a public meeting Thursday afternoon, which State Representative Jeff Thompson, R-Bossier City, described as the first of many discussions to come.

Their intention, Thompson said, is to keep local residents informed on what’s coming next in the battle with giant salvinia, an aggressive species native of South America. Though it’s a small free-floating fern, it can easily cover acres of water in no time.

Giant salvinia is a threat to fish and other aquatic animals due to its ability to block sunlight, which decreases the amount of oxygen in the water. Mike Wood, Director of Inland Fisheries with the Louisiana Department of Wildlife & Fisheries, said state officials initially underestimated the invasive aquatic fern when it was first discovered in Toledo Bend.

To date, there are approximately 30 to 40 bodies of water in Louisiana that contain the aquatic fern. Because of its rapid growth abilities, giant salvinia has become one of the most problematic aquatic plants in southern states.

“This is a plant that doubles in size every seven to 10 days,” Wood said. “This is something that will be here for a long, long time.”

Officials reported over the summer that the giant salvinia level reached an astounding 1,550 acres on Lake Bisteneau, located near Minden and extending southward to Bossier Parish near Elm Grove. There are a number of ways officials have taken action, including the use of herbicides, water fluctuation, quarantine and weevils.

Wood said they have airboats coming in soon to handle shallow, hard to reach areas on Cypress Black Bayou. Thompson said he has considered seeking legislative help for securing a possible regular funding source in order to keep work headed in the right direction.

“Whatever it is, we have use for it here,” Thompson added. “Right now we’re in a situation where we take one step forward then take two steps back.”

Thursday’s public meeting is just the beginning in the fight against giant salvinia in Bossier Parish.

“Help is coming,” Thompson said. “We are aware of the problem and we’re working with local and state agencies to continue moving forward in this ongoing battle.”

Officals encourage watercraft owners to clean boats and trailers before leaving salvinia infested water bodies in order to prevent it from spreading any further. Residents who would like to express their concerns regarding the giant salvinia problem are encouraged to contact Mike Wood with the Louisiana Department of Wildlife & Fisheries at mwood@wlf.la.gov.