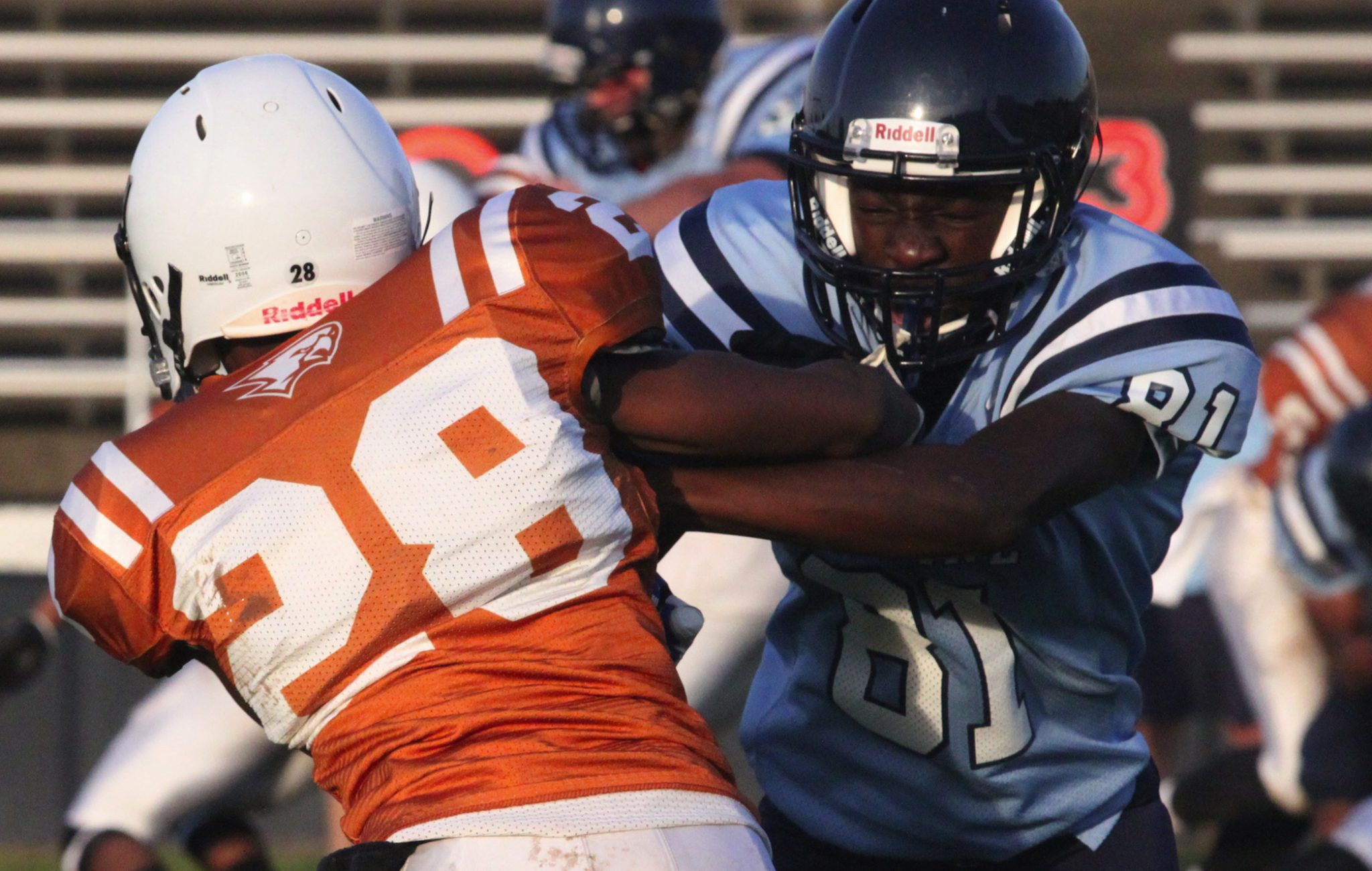 Near the end of his postgame speech, Airline coach Bo Meeks asked his team what their just completed scrimmage against Northwood really meant.
The answer, of course, was nothing.
In the players’ minds there may have been a winner and a loser, but in the end, as Meeks said, it was simply a “learning experience.”
The six Bossier Parish teams wrapped up spring football practice last week with scrimmages.
Parkway scrimmaged Alexandria Senior High Thursday in Alexandria, and Louisiana New Tech at Plain Dealing hosted Red River and Huntington.
In addition to the Northwood-Airline scrimmage Friday, Haughton hosted Bossier and Benton had an intra-squad scrimmage.
At Haughton, the Bucs got a pregame speech piped in the fieldhouse from head coach Rodney Guin, who is at Baylor University Medical Center recovering from a heart attack suffered April 26.
The Bucs scored three quick touchdowns in the first period with their first unit. Antonio Woodfork made a nifty catch of a tipped pass in the front corner of he end zone, sophomore Josh Lister ran about 50 yards, and Javonte Woodard caught a touchdown pass of about 90 yards.
“No. 1, we got out of there healthy, which was important,” said Haughton assistant coach Jason Brotherton, who is leading the Bucs while Guin recovers.
“I thought we did a good job of getting the ball to our athletes, our playmakers. We’ve got good athletes, but we’ve got to be able to get them the ball and we did that tonight.
“Probably the biggest thing I was pleased with was our defense. They played well, caused some turnovers. That was kind of the big thing for us.”
Bossier, which had less than half as many players dressed out as Haughton, did manage to get a few first downs with their first team but didn’t score.
At Airline, the Vikings’ first-team offense scored four touchdowns, including two in a game-type 15-minute period to end the scrimmage. Running backs LJ Strachan and Shuncee Thomas both ran the ball well and scored touchdowns.
Quarterbacks Noah Hildebrand and Thomas McKain both led the Vikings on TD drives.
The defense struggled a bit as the Falcons scored four TDs during the 15-minute period.
“We started a little bit slow offensively in the first series and then in the last series and during the quarter I thought we really played well,” Airline coach Bo Meeks said. “We played to our strengths. I think offensive-line wise we were very good. I think our running backs are outstanding and our receivers have really gotten a lot better.
“I thought the quarterbacks overall played well. I thought Noah played really well, was really pleased with his effort tonight, made a lot of plays for us.
“Defensively, we did some good things — and Northwood’s got some great players,  some really good receivers and the quarterbacks good — but with the guys we have coming back we’ve got to be better than we were. That’s disappointing but it’s a learning experience and we’ll get better from there.”
At Plain Dealing, New  Tech coach Coy Brotherton was extremely pleased with his defense.
“It went real well,” Brotherton said. “We went against Huntington and Red River and neither team scored against us. Matter of fact, neither team got across the 50-yard line.
“Defense has been our point of emphasis this spring and we played real well against Fair Park (on May 9). And against Huntington/Red River I think we only gave up like 35 or 40 yards in 40 plays. The three linebackers are playing well.”
Offensively, Logan Allen, a returning starter, threw touchdown passes to Keldrick Carper, Desean Morris and Isaac Jacobs.
At Alexandria, Parkway dominated its scrimmage against ASH. New quarterback Keondre Wudtee completed 11 of 15 passes for 458 yards and six touchdowns. Artavious Lynn caught three of them covering 80, 44 and 39 yards. The other three were to Stacy McCray (70 yards), Jared Lancaster (70) and Demetrius McAtee (80).
William McKnight and Maleck Zeidan also scored on runs of 90 and 5 yards, respectively.
Parkway’s first-team defense allowed only one score.
Benton coach Reynolds Moore said his team’s intra-squad scrimmage went well. Because of track and baseball, Moore hasn’t had all of his key varsity players for the duration of spring practice.
For instance Christian Smith, a possible replacement for Jordan Shaffer at quarterback, was with the team for only four practices because of baseball.
“We saw a lot of good things but we also saw a lot of things we need to work on,” Moore said. “Christian Smith, I think, really showed that he’s got some promise to be the guy. He had a couple of nice reads on the zone reads and completed some tough passes.”
Moore believes that his defense, which includes several three-year starters, has the potential to be great, but he said the offense enjoyed some success against them in the scrimmage.
Clayton Festavan broke a touchdown run of about 60 yards.
“Defensively, they weren’t as sharp as I’ve seen them just day to day, but on a daily basis they dominate us offensively. When our first-team offense and defense go head-to-head in practice, the defense dominates.”