Bossier Sheriff Julian Whittington says a second man who was wanted for the Dec. 12 armed robbery at a residence on Parker Road has been arrested.

Bossier investigators determined Jordan, who lived next door to the victim at the time of the crime, and Harris forced their way into a woman’s residence in the 500 block of Parker Road in Haughton on Dec. 12, pushed her down, and tied her up with cords from a hair dryer and box fan. They then forced her into the bedroom holding a handgun to the back of her head, before fleeing her residence with $326 cash and the victim’s 1997 Chevy Lumina. The car was located and recovered on West 70th in Shreveport the next day.

Jordan, a dropout from Haughton High School, had been considered armed and dangerous. He fled the area, but Bossier detectives determined he was hiding out in Ville Platte, La. Jordan was taken into custody without incident on Jan. 6 with assistance from the Evangeline Parish Sheriff’s Office and subsequently transported to Bossier Parish.

Jordan’s co-defendant in this case (Damien Harris, 31, of the 200 block of S. Cherry St. in Haughton), was arrested on Dec. 18 for his involvement in the robbery. Harris is charged with armed robbery with a firearm, aggravated battery and simple escape for running from the deputy while in handcuffs. Harris was booked into the Bossier Maximum Security Facility and his bond set at $135,000. 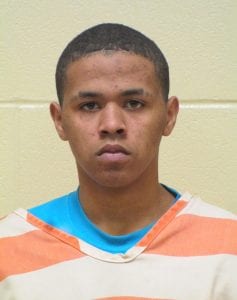