A portion of Interstate 220 in Bossier Parish has been dedicated to the late Bossier City Marshal Johnny Wyatt. 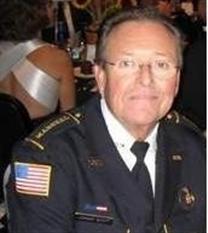 R. Thompson (who represented District 8 (Bossier Parish) at the time) proposed the legislation that was signed into law in 2014, designating I-220 between Interstate 20 and the Swan Lake Road exit as the “Johnny Wyatt Memorial Highway.”

Wyatt served as Bossier City Marshal from 1991 until his untimely death in October 2010. In 2006, he started the Northwest Louisiana Internet Crimes against Children Task Force. His pioneer work using technology to fight online predators and protecting children has become a model throughout the region.

Adley and Thompson presented Wyatt’s son, Jeffery Wyatt, with a commemorative sign. Road signs have already been placed on I-220.

See the Aug. 26 edition of the Bossier Press-Tribune for more on this story.