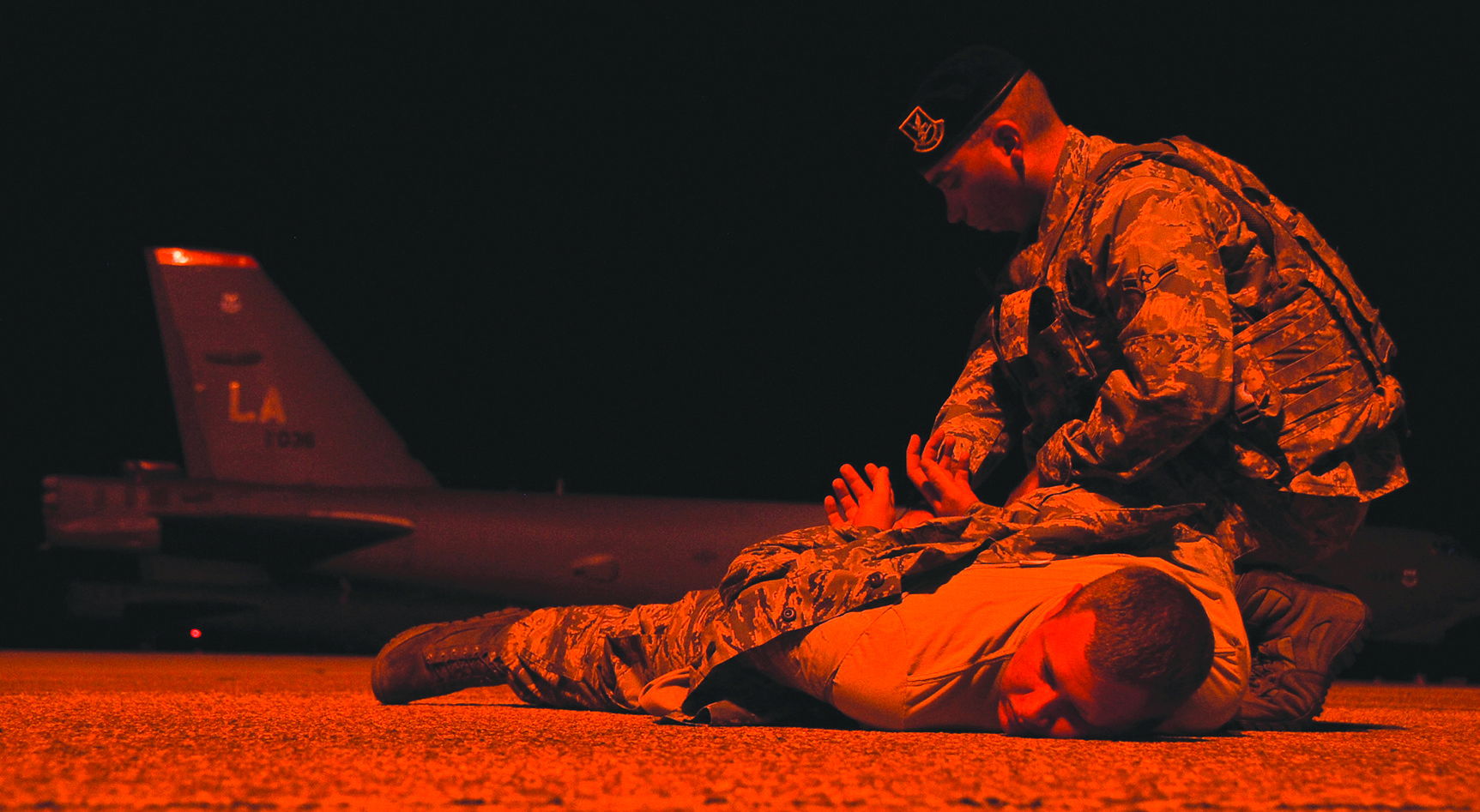 BARKSDALE AIR FORCE BASE — With more than 22,000 acres of land and more than 2,100 base residents, Barksdale’s Security Forces keep Airmen and families safe day and night.

The 2nd Security Forces Squadron, like many other units, uses multiple shifts to ensure that not only the base mission gets done, but the Air Force’s as well.

“We have complete trust in the forces who work nights,” said Capt. Clifford Piernick, 2nd SFS chief. “They are paramount in the safety and security of the base. Our guys on nights are critical.”

These defenders of the night do the same as their day shift counterparts, only with more challenges.

“Night shift is completely different from days, and not just because it’s dark,” said Master Sgt. Gregory Stanley, 2nd SFS Charlie Flight chief. “The limited visibility makes even routine traffic stops harder. A toy gun in the daytime may seem like a real one at night.”

Whatever incidents may occur during the shift, the 2nd SFS night forces stand ready to respond.

“Most nights are pretty quiet,” said Stanley. “Then we have nights where it seems we are busy with a number of calls that can send our shift running in different directions.”

Day or night, the 2nd SFS Airmen have a job to do, but some things only happen after daylight hours.

“We get alarm activations from offices that are secured for the night,” said Tech. Sgt. Nicholous Banks, 2nd SFS C-Flight chief. “When alarms activate during our shift, we respond and secure the building. What makes this difficult at night is the people who reset the alarm may not live on base or may already be asleep. So we have to wait for them to arrive.”

Despite alarm calls or other incidents night shift responds to, the 2nd SFS Airmen are still able to embrace the wingman concept.

“Since the Airmen work at night, they spend more time getting to know each other and build strong relationships,” said Stanley. “This helps the Airmen when they have to go down range or when they move to other bases. They also spend more time focused on their craft and becoming experts at what they do as base defenders.”

While there are advantages to working nights, it can also present challenges for shift Airmen.

“One of the biggest disadvantages night shift has is that it’s dark out,” said Tech. Sgt. Kevin Martens, 2nd SFS C-Flight chief. “This can make it more dangerous for the Airmen responding to calls. The low lighting makes it difficult to notice that small detail that can save our life or someone else’s.”

Base protection doesn’t come without sacrifice though; both Airmen and their families are affected.

“I almost never see my fiancé for more than a couple hours a day,” said Staff Sgt. William Heinemann, 2nd SFS installation patrolman. “By the time I get home she is going to work and vice versa. It can make starting a family rough, but families understand it’s what we have to do to protect the base and keep the mission running smoothly.”

Routine calls are not the only things that happen after dark. Weird and memorable things happen as well.

“We have had calls from animals getting into trash cans and more,” said Senior Airman Braden Thomson, 2nd SFS installation patrolman. “From little furry thieves and snakes visiting families, we get many calls other shifts don’t receive simply because of the animals that come out at night.”

Nights also offer training advantages over other shifts, with less people out and around on the base, the 2nd SFS use this to hone their job skills.

“Sometimes we may not receive many calls to respond to, so we train,” said Banks. “We can run many different scenarios that we can’t during day shifts. This helps all our guy’s learn what to do when something happens. From traffic stops, arrests, alarms and flightline emergencies, we can work on perfecting our skills without impacting other unit’s day-to-day operations.”

Through the dedication of every 2nd SFS Airman who rides the night streets, patrols the dark corners of the base and stands ready at a their post, Team Barksdale can rest easy knowing the night shift forces watch over the base.

“I appreciate the guys on nights,” said Piernick. “My favorite quote from George Orwell sums it up nicely, ‘People sleep peaceably in their beds at night only because rough men stand ready to do violence on their behalf’.”