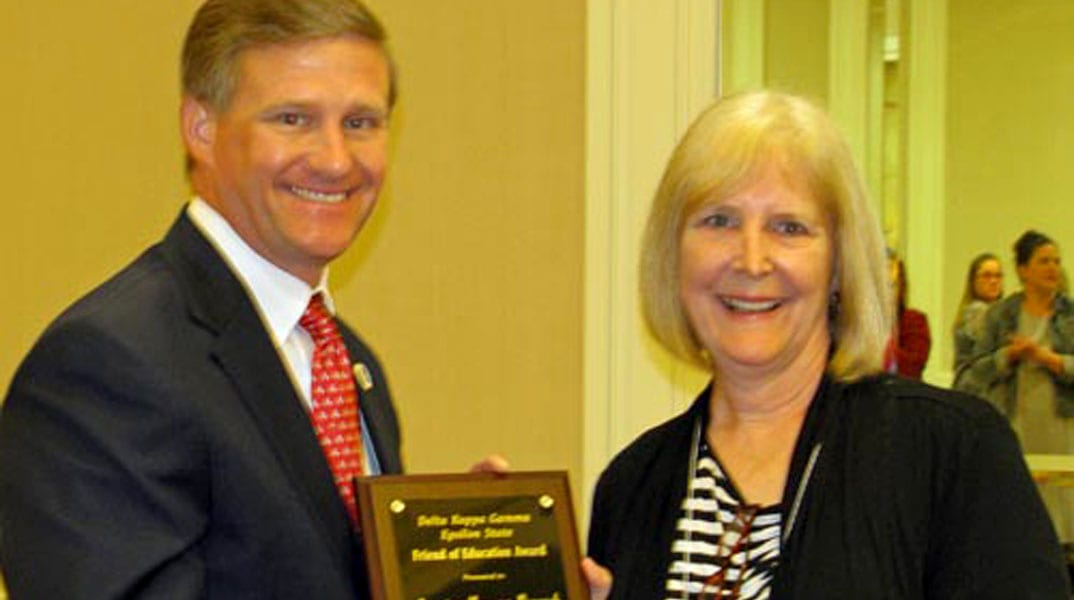 Sen. Barrow Peacock (R-District 37 Shreveport-Bossier) was recognized with the statewide Friend of Education Award by Delta Kappa Gamma woman’s educators society on March 25 at its 83rd state convention in Kenner.

The Louisiana membership is more than 2,000.

Not only did he visit 40 schools in his own district, but private and charter schools and 12 others outside of the district when invited. He continues to do so.

At Southfield School, a student presented an idea which Peacock was able to amend into a bill that allows an eighth-grader who is 15 to take driver’s education instead of waiting until the ninth grade. Peacock also presented a resolution at Southfield to commend and congratulate Adriana Martin for being ranked first in the United States and World Pi Ranking as a 7 year old.

Many of the visits were arranged through the Caddo and Bossier school system liaisons and others were by invitation. Some of the visits were in conjunction with the Board of Elementary and Secondary Education, Louisiana Superintendent of Education John White and Sen. David Vitter’s educational meetings.

A prime example of the impression and importance of Peacock visiting schools took place when Jamie Neeley, a student he met at Parkway High School five years ago, was on a plane with him from Dallas in March. Neeley is now a music major at Northwestern State University. He was traveling back from Washington, D.C., and recognized the senator from the visit and they took a photo together.

“Our schools are an example of the American dream in that the opportunity to succeed is available to all of the students if they are willing to apply themselves,” Peacock said. “I welcome ideas to improve our educational system. We can’t be complacent. Our most important investment is our human capital, which is our educational system and knowledge-based economy.”

He said Louisiana’s teachers are of “vital importance to all of our citizens and our legislative decisions significantly impact and determine the quality of the state’s schools and teachers. The teachers who I have met have shown that they are committed to their students to compete with anybody in the world.”

Peacock has also allowed students to job shadow at his legislative office and interview him for school papers. He regularly visits with 4-H’ers during session and has recognized excellent students on the Senate floor.

He has also visited every higher education institution in Shreveport-Bossier.