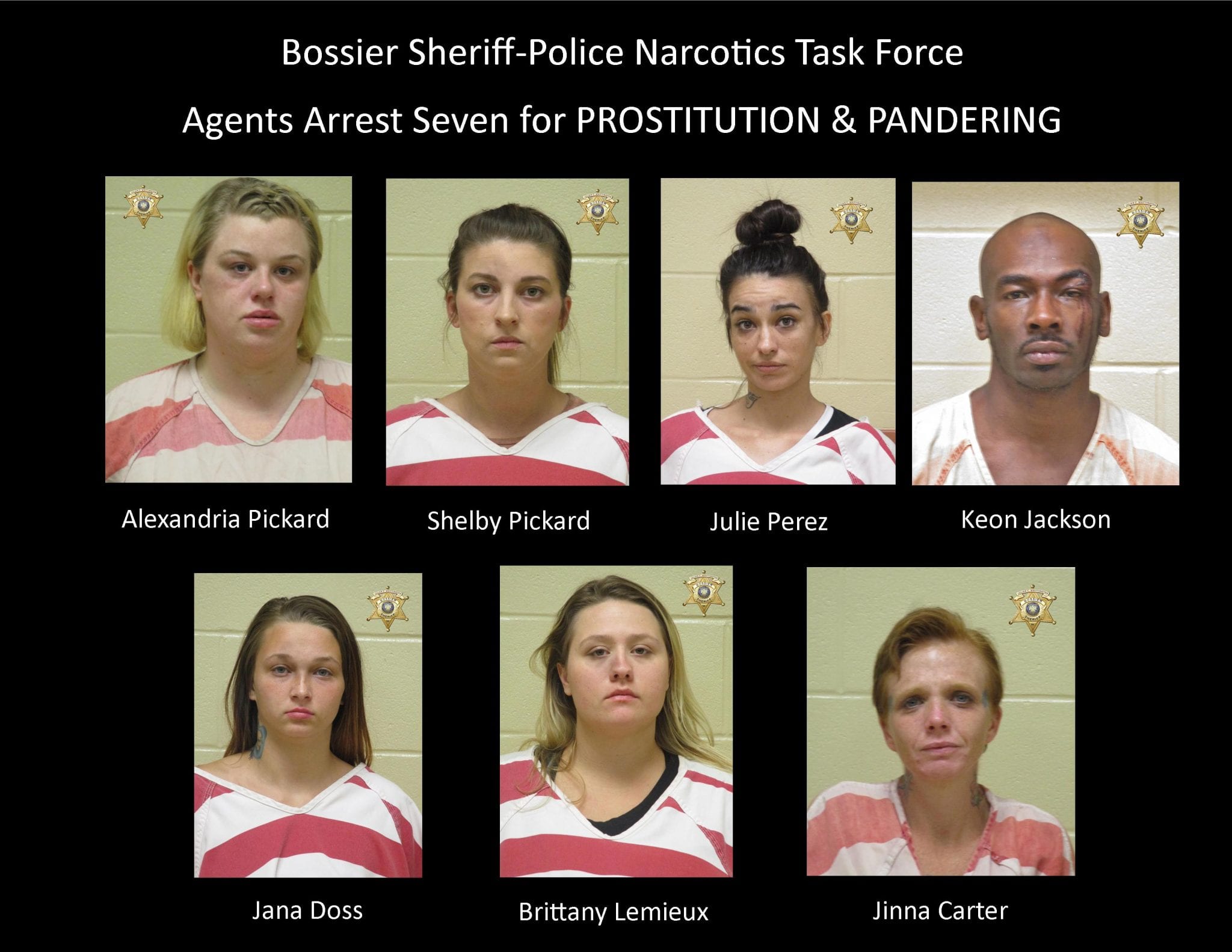 The Bossier Sheriff-Police Narcotics/Vice Task Force arrested four people for prostitution and three others for pandering at various locations in Bossier City over the past week.

Arrested on July 31 were sisters Shelby Pickard, 27, and Alexandria Pickard, 29, of the 100 block of 15th Street in Springhill.  Shelby contacted an undercover Bossier Sheriff’s Office agent online to negotiate exchanging sex for money.  Her older sister, who told the deputy she got her sister into prostitution, served as the lookout.  Shelby was charged with Prostitution, while Alexandria was charged with Promoting Prostitution and Pandering.

Arrested on July 25 was Jinna Carter of Bossier City, 33.  She had agreed to meet an undercover agent to exchange sex for money.  She was also found to have syringes with methamphetamine.  She was charged with Prostitution, Possession of Schedule II (Methamphetamine), and Possession of Drug Paraphernalia on July 25.

Arrested on July 24 were Julie Perez, 27, of Lubbock, Texas, and Keon Jackson, 35, of Minden.  Perez arranged via online to meet an undercover Bossier agent to exchange sex for money.  While she was being taken into custody, she fought and screamed, kicking the undercover agents at the scene.  Perez was charged with Prostitution, Resisting, Possession of Schedule I (Marijuana), Fugitive Warrant from Texas, Probation Violation and Failure to Appear for Possession of Marijuana.

Jackson stood watch in the parking lot while Perez was inside the hotel.  Deputies initiated a traffic stop with Jackson near the hotel, but he fled in his vehicle.  When he couldn’t go any further in his vehicle, he fled on food into the woods and back towards the hotel, where he was met with other undercover agents, who then took him into custody.  Jackson was charged with Pandering, Promoting Prostitution, Resisting, Flight from an Officer, Improper Turn, Reckless Operation, No Driver’s License, Possession of Marijuana, and Fugitive Warrant.

Arrested on July 24 was Jana Doss, 22, of Moore, Oklahoma, and Brittany Lemieux, 21, of Wewahitchka, Florida.  Doss agreed to meet an undercover agent to exchange sex for money.  While Doss was inside the hotel room, Lemieux would keep watch in the parking lot.  When deputies made contact with Lemieux, they found marijuana in the vehicle, along with Doss’ 4-year-old son.