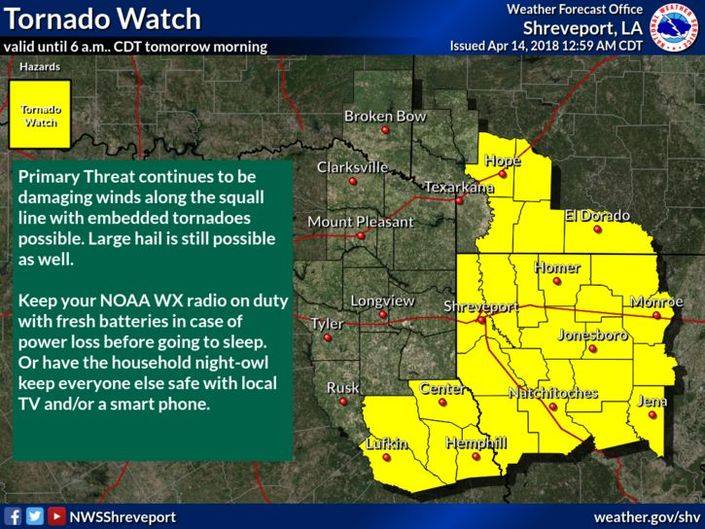 Thousands are without power across Bossier Parish as a line of severe storms pushed through early Saturday morning.

Meteorologists report severe storms with 60-70 mph wind hit the area just after midnight. SWEPCO is reporting more than 32,000 customers are without power across Texas, Louisiana and Arkansas as a result of this storm system.

Local news stations are reporting trees down and damage to a mobile home in the Haughton area.

There have been no reported injuries at this time in Bossier City as a result of the storm that moved through the city this evening, according to Bossier City Public Information Officer Mark Natale. Storm damage/related issues in Bossier City include:
-Power outages reported in many portions of the city, traffic signals at several intersections not functioning.
-Damage reported to retail buildings in the 2900 block of East Texas.
-Tree down on mobile home in Santa Fe Mobile Home Park, no injuries reported.
-Power lines reported down at several areas including 100 block of Robert E. Lee Place, 400 block of Hamilton Road.
-Trees and power lines reported down and homes reported damaged in parts of Meadowview and Swan Lake neighborhoods.

Motorists are advised not to travel on roadways in Bossier City if they don’t have to.

A Tornado Watch continues for the overnight hours until 6 a.m. The primary threat is for damaging winds along the squall line along with embedded tornadoes, according to the National Weather Service in Shreveport. Large hail cannot be ruled out as of yet. Localized flash flooding will be possible where heavy rain fell earlier in the event on Friday.

Update (Saturday 4/14/18 at 9:45 a.m.) : All phones are up and running at the Bossier City Police and Fire Departments. Again, emergency calls to Bossier 911 were not affected while the non-emergency police and fire phone systems were down.