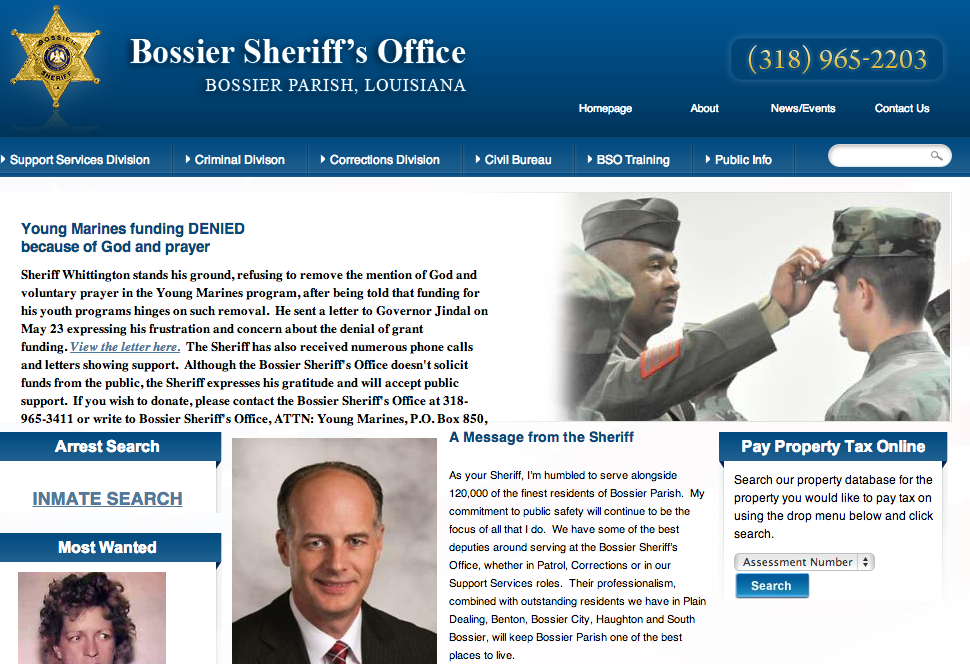 A rally has been planned on Independence Day to support Bossier Sheriff Julian Whittington’s refusal to remove religion from the youth programs sponsored by the Bossier Sheriff’s Office.

The 4th of July “In God We Trust” rally will be held Thursday from 1-4 p.m. at the Viking Drive Substation, 2510 Viking Drive, Bossier City.

Bossier Sheriff Julian Whittington has taken a stand against the federal government for denying the Sheriff’s Office federal grant funding for their Young Marines and Youth Diversion programs worth $30,000, because of the mention of God and voluntary prayer in the programs.

“We are holding the 4th of July “In God We Trust” rally because this issue is about as close to home as it gets,” said Whittington. “It’s a direct attempt to try to influence what we do right here at home, and we want to send a message to Washington, D.C. (that) this is a wake-up call, and it’s our time to stand and say, ‘In God We Trust’.”

Sheriff Whittington received notice that funding would be restored only if he signed a letter “pledging that no prayer or mention of God would be allowed” in the programs.

Sheriff Whittington has made it clear that he will not remove God nor voluntary prayer from either program, previously telling the Press-Tribune “I don’t work for people in Washington. I work for the people of Bossier Parish and the majority of people in Bossier feel the same as I do. What we are asking for is certainly not infringing or forcing anyone to do anything. We are not lining people up against a wall and forcing them to pray. It has always been a volunteer led prayer.”

Sheriff Whittington will be joined by other local, state, and federal dignitaries who will sign a large banner offering their support for “In God We Trust.”

“This program has had prayer that has been led by teens who are in this program, and when it hasn’t been led, they had a moment of silence,” Peacock previously told the Press-Tribune. “But now they are being told by our federal government, by the Department of Justice, that there can be no prayer activity or they will not fund this program.”

“I am tremendously grateful to the people who have offered up their support of our young people and the shared disbelief over an objection to even the mere mention of God in our youth programs,” Sheriff Whittington said.  “The Young Marines program is such a positive influence on the lives of our young men and women, and about 1,000 recruits have graduated from the program over the past decade.  Our newly-formed Youth Diversion is another tremendous program that will steer young men and women down a positive road so that they, too, can become productive citizens in our communities.”

The BSO is forging ahead with the programs, paying for them out of the department. As of the start of this week, the sheriff’s office had received approximately $2,500 in donations to support the programs.