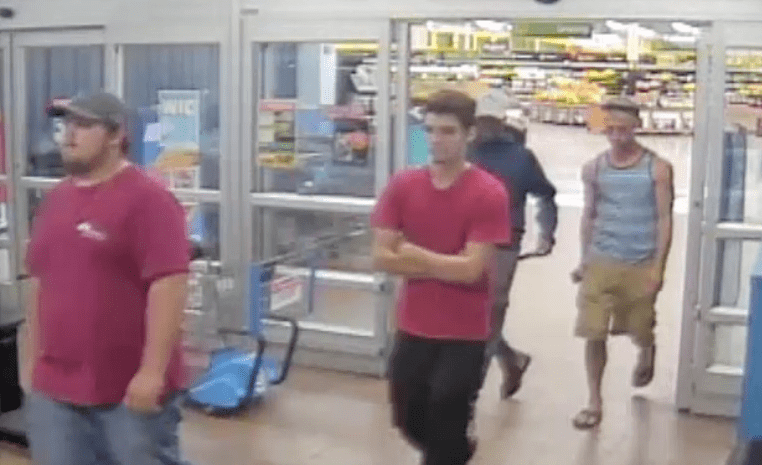 Detectives with the Bossier Sheriff’s Office are looking for four male suspects caught on surveillance camera trying to make a purchase with a stolen credit card at Wal-Mart on Airline Drive in Bossier City last week.

The four suspects are described as three white males and one black male, possibly in their late teens to early 20s, and are believed to be suspects in recent vehicle burglaries in the Benton area.

The surveillance video at Wal-Mart shows two men (white heavy-set male with a beard dressed in a red shirt and baseball cap and a black male wearing a blue hoodie with a cap) pulling into the parking lot in a dark hatchback (possibly a Hyundai Accent, Ford vehicle or Kia vehicle) around midnight on Nov. 1; they then enter the store.   Then two other men (white male in a red shirt and white male wearing a tank top and shorts) pull up in a second vehicle (possibly a white Tahoe), park next to the first vehicle and enter the store.  The four men bring their apparent purchases to the self-check-out counter and attempt to use a credit card to make payment of sodas, pillows, comforters, sheets and other sundries.  Their transaction was denied, and they depart the store empty-handed.

Bossier detectives are also investigating other vehicle burglaries that have occurred since late October in the Bayou Bend, Lakewood, Autumn Wood, Tiburon and Legacy subdivisions.  Bossier Sheriff’s Office released a video last week of a white female suspect sought in connections with those crimes.  Criminals are targeting neighborhoods late at night and stealing from unlocked vehicles.

“Our detectives are working closely with homeowners and businesses in order to identify these culprits, and we ask anyone with information about the identity of these thieves to contact us immediately,” said Bossier Sheriff Julian Whittington.  “People work hard for their belongings, and it’s despicable that folks think they can steal from others.   We will not tolerate such criminal activity here in Bossier Parish…you will be caught and you will be arrested.  Then when you serve your time in jail and are released, go get a job!”

Anyone with information about these suspects or these vehicle burglaries is asked to contact Bossier Crime Stoppers with your anonymous tip at (318) 424-4100.