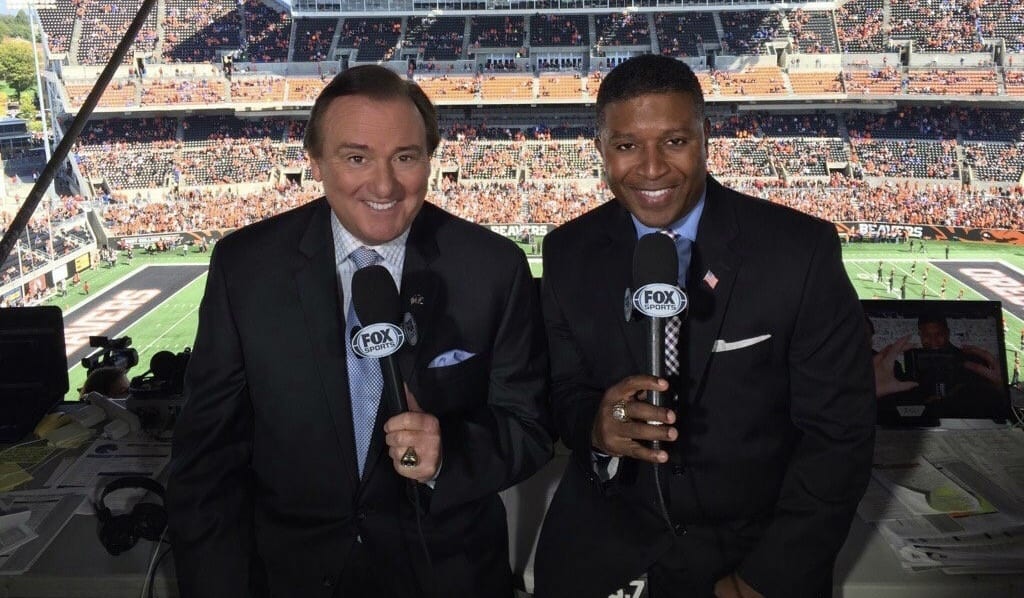 NATCHITOCHES – Shreveport broadcast personality Tim Brando, who has been on the national sports scene for four decades, has been selected to receive the inaugural Louisiana Sports Hall of Fame Ambassador Award and will be part of the Hall’s Class of 2020 enshrined next June.

The Ambassador Award was created by the Hall’s parent organization, the Louisiana Sports Writers Association. The award honors long-term exemplary contributions to the perception of Louisiana by an individual who has ties to the state’s sports landscape. The Ambassador Award carries membership in the Hall of Fame. The award will not be presented annually, but occasionally, as the Selection Committee chooses, said Hall of Fame chairman Doug Ireland.

“Throughout his career as one of America’s premiere sports broadcasters, Tim has been a tremendous advocate for our state. Our selection committee believes he is the ideal person to be the inaugural winner of the Ambassador Award as a person who has been nationally prominent in his field while constantly promoting Louisiana through words and deeds,” said Ireland. “Brando’s influence has benefited our state’s identity.”

Brando, who has been part of the Fox Sports stable of announcers since 2014, has been a studio host and play-by-play announcer for ESPN, CBS, Raycom/Jefferson Broadcasting, Sirius/XM, and Turner Broadcasting since the mid-1980s. He has received a wide range of national honors for his broadcasting career. His work has earned him four regional Emmy Awards and critical acclaim from national media writers and outlets.

Brando has been honored with the Jake Ward Award in 2009 for outstanding promotion of intercollegiate athletics by the College Sports Information Directors of America, and the 2014 Lindsey Nelson Award given by the Knoxville Quarterback Club. In 2018, he received the Broadcast Legend Award presented by the Lombardi Honors, only the third such honoree behind Dick Enberg and Verne Lundquist. That year Brando also was presented Richard M. Uray-Alpha Epsilon Rho Award for Lifetime Achievement from the National Broadcasting Society-Alpha Epsilon Rho, awarded to an individual, company, or organization that best represents excellence in the field of electronic media. Past recipients of the Uray award include Walter Cronkite and Bob Costas.

He also has been honored with recognitions from his home state, including the Independence Bowl in Shreveport naming Brando its’ Sportsperson of the Year in 1992 and giving him a Lifetime Achievement Award in 2005.  He is also an inductee into the Northwest Louisiana Walk of Stars in Shreveport (2016) and the Louisiana Italian American Sports Hall of Fame, earning their Buddy D Media Award (2019).

The Ambassador Award, to be presented June 27 in Natchitoches, means Brando will be among the elite 12-person Class of 2020 being inducted in the Louisiana Sports Hall of Fame.

Brando will be among the 2020 Louisiana Sports Hall of Fame Induction Class to be spotlighted in the annual Induction Dinner and Ceremonies on Saturday evening, June 27, at the Natchitoches Events Center. The Induction Dinner and Ceremonies are the highlight of the 2020 Induction Celebration beginning Thursday afternoon, June 25, with a regionally-televised (Cox Sports Television) press conference at the Hall of Fame museum at 800 Front Street in Natchitoches.

Also honored with enshrinement in the Class of 2020 will be the Dave Dixon Louisiana Sports Leadership Award winner, to be announced Thursday.

The 2020 Induction Class will be showcased in the Louisiana Sports Hall of Fame Museum, operated by the Louisiana State Museum system in a partnership with the Louisiana Sports Writers Association. The striking $23 million, two-story, 27,500-square foot structure faces Cane River Lake in the National Historic Landmark District of Natchitoches and has garnered worldwide architectural acclaim and rave reviews for its contents since its grand opening during the 2013 Hall of Fame induction weekend.

In 1971, at the age of 14, Brando worked in a press box for the very first time, calling Neville High School football on KLIC radio in Monroe alongside his father, Shreveport broadcast pioneer Hub Brando.  Brando brought several speech, debate and broadcasting awards to Fair Park High School in Shreveport while earning a scholarship to Northeast Louisiana University (now ULM) in 1975.

After college, Brando moved south in 1978, honing skills that would serve him for the rest of his career.  Brando’s nightly sports talk radio show on WIBR was the first of its kind in Baton Rouge, and his play-by-play of high school football earned him the 1981 Louisiana Association of Broadcasters Best Play-By-Play Award, beating out college broadcasts with wider audiences.

During this time, Brando began his association with the fledgling TigerVision, becoming the voice of LSU basketball.  After a brief sojourn at WGSO Radio in New Orleans, Brando returned to Baton Rouge to become sports director at WAFB TV.  It was during this time that Brando began one of his favorite jobs, calling college basketball for Raycom/Jefferson Pilot from 1983 until the creation of the ACC network in 2019.

After earning his stripes in South Louisiana, Brando became one of the second wave of sportscasters who joined ESPN in the mid-1980s. In addition to being a SportsCenter anchor from 1986-94, Brando was the original host of ESPN Gameday, the college football pre-game show that is now a national institution, and the network’s NCAA Tournament basketball coverage.

Brando made the decision to depart ESPN headquarters in Bristol and return his family to his hometown to raise his two daughters in 1990, where he remains headquartered to this day. His career continued upward as he reconnected with Louisiana, and as his stature rose, he remained a prominent walking and talking advertisement for his home state.

After leaving ESPN, Brando earned a ring in 1995 calling Braves games for Turner Sports during the Braves’ run to the World Series championship, before making the biggest move of his career to that point, working for 18 seasons at CBS Sports. Beginning in 1998, he was host of the CBS Sports College Football Today studio show, and did NFL and occasional SEC games for the network regularly from 1998-2002, along with calling  NCAA Tournament basketball play by play throughout his time with CBS.

From 2011-2015, Brando originated a CBS Sports/Sirius XM simulcast college sports talk show from Shreveport, an offshoot of a longer-running Tim Brando Show which ran on Sporting News Radio and other national distribution channels beginning in 2001.

In 2014, Brando signed a multi-year deal to become a play-by-play commentator in football and basketball for Fox Sports, where he enjoys mentoring the rising generation of sports journalists.

Brando has covered 26 individual sports, 25 of them while at ESPN, which is still considered the most ever by anyone at the network.  He has worked games for the NFL, MLB and NBA.  He has covered football and/or basketball in the Southeastern Conference, Big 10, PAC 12, Big XII, Big East, ACC, and American Athletic Conference.

Brando’s coverage of the booster cheating scandal at Southern Methodist University in the mid-1980s was among some of the enterprise reporting that led to the disbanding of the Southwest Conference and SMU’s death penalty punishment in college football. Brando also displayed his reporting skills and calm under pressure during his coverage of the SEC semifinal tournament game in Atlanta in March of 2008, when a tornado struck the area, suspending the game. Brando became a news reporter, describing the scene and the consequences of the tornado for more than an hour to the Raycom Sports network audience.

The 2020 LSHOF Induction Celebration will kick off Thursday, June 25, with a press conference and reception. The three-day festivities include two receptions, a youth sports clinic, a bowling party, and a Friday night riverbank concert in Natchitoches. Tickets for the Saturday night, June 27 Induction Dinner and Ceremony, along with congratulatory advertising and sponsorship opportunities, are available through the LaSportsHall.com website.

Anyone can receive quarterly e-mails about the 2020 Induction Celebration and other Hall of Fame news by signing up on the LaSportsHall.com website.

Adding to the 350 sports competitors currently enshrined, 19 winners of the Dave Dixon Louisiana Sports Leadership award and 64 recipients of the Distinguished Service Award in Sports Journalism, there are 433 current members of the Hall of Fame before this summer’s inductions.

The 2020 Induction Celebration weekend will be hosted by the Louisiana Sports Hall of Fame Foundation, the support organization for the Hall of Fame.  The LSHOF Foundation was established as a 501 c 3 non-profit entity in 1975 and is governed by a statewide board of directors.  For information on sponsorship opportunities, contact Foundation President/CEO Ronnie Rantz at 225-802-6040 or RonnieRantz@LaSportsHall.com.  Standard and customized sponsorships are available.