Nestled in the tree line on North Hazel Street in Haughton is a sign of things to come.

The red and white words read ‘coming soon’ at the future home of Joe Delaney Memorial Park. It’s a promise made by a group of citizens who have dedicated their time to honoring a town hero.

Joe Delaney, a Haughton native, was a two-sport All-American at Northwestern State University in Natchitoches and a Pro Bowl running back for the Kansas City Chiefs. He died June 29, 1983 while trying to save three children from drowning in a pond near Monroe. 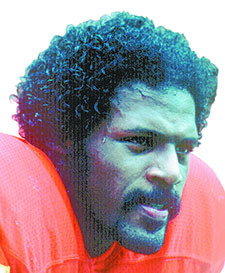 Delaney, 24, couldn’t swim, but it didn’t stop him from trying. Only one survived the waters that day.

The story of Joe Delaney’s life has been told and retold through the years. One thing has always remained the same though – his actions that day matched his selfless lifestyle, coupled with his astounding athletic career, and make him an icon in north Louisiana far beyond any athletic arena.

For years, the town of Haughton has wanted to honor Delaney with a park, but the funds were not readily available. The community has since stepped up and the project has taken off.

Martha McGee, a Haughton alderwoman, chairs the Joe Delaney Memorial Park committee and said things are really just getting started. She said dirt work should begin around the first of October.

“Our hold up is with the Bossier Parish Police Jury, who is going to help us with the dirt work. They have been busy with other things since we had all that rain in the spring and with the river flooding,” McGee said in a phone interview. “Once we get that done, we feel like we can get in there and start working on everything else. Our goal for next summer is to have at least a piece or two of playground equipment in there, a sand volleyball area, restrooms, fencing and as much as we can by that time. It’s going to be a great park and it’s going to have a lot in it.”

The vision is grand for the six acre park on North Hazel Street. Three acres were donated by Sam Pullig and another three acres were purchased. McGee said there will be a memorial built inside the park as something for people to visit and remember Joe.

“The town of Haughton does not have a park and we’re the second fastest growing area in Bossier Parish,” McGee said. “We need this park. It has been talked about for many years now, but we are going to do this park. We are excited and ready to get this started.”

Several fundraisers were held over the years, including a benefit concert and 5K. Recently, Citizens National Bank was a major sponsor of the Joe Delaney Foundation Fundraiser at the Robinson Film Center earlier this month.
A special showing of the ESPN 30-for-30 short film “Delaney” raised more than $10,000 to benefit the Joe Delaney Memorial Park. Jason Smith, Senior Vice President of Citizens, said they are ecstatic to support this worthy cause.

“The hope with this film coming out is that the story of Joe Delaney will reach the generations who aren’t familiar with him,” Smith said. “Any opportunity to promote his story and reintroduce him to new generations is worthy of our time and attention. We need good role models at a time when many role models for student athletes don’t reflect the things we want replicated. Being a good role model, whether it is now or 30 years ago, is something that each generation should have exposure to.”

Delaney was a two-time All-America running back in 1979-80 for the Demons, and joined Mark Duper, Victor Oatis and Mario Johnson on the Demons’ 1981 NCAA championship 4×100 meter relay team, earning All-America honors. His No. 44 Demon football jersey was retired at halftime of his final game at NSU. He is immortalized in several ways at Northwestern, including plaques at Turpin Stadium and the Ledet Track Complex, and with the permanent football team captains receiving Joe Delaney Memorial Leadership Awards annually.

As a former track athlete at Northwestern State, Haley Blount heard about Delaney for many years, saw the plaques on the walls of the NSU Athletics facilities, and thought she knew his story. However, it took hearing the stories about him from his former teammates, family and friends to really bring his persona to life.

“Not only was Joe an outstanding athlete, but he was an even more outstanding person,” Blount, Assistant Athletic Director for Development & Marketing at Northwestern State University, said. “His selfless commitment to his family and his team, and ultimately three children he didn’t even know, is what made him one-of-a-kind; he is someone we should all strive to be like.

Blount continued, “Joe would take great pride in seeing this park come to life, and providing a place for children in his community to grow and play. Northwestern State is committed to assuring that Joe’s legacy lives on and continues to inspire people, both young and old, for decades to come.” 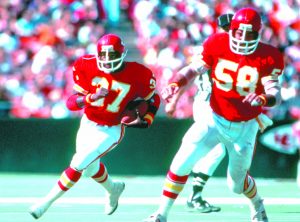 second round of the 1981 NFL draft, Delaney would set four club records in his rookie season en-route to being voted the only rookie starter for the AFC in that season’s Pro Bowl.
Delaney’s story will not be aired as a full-length documentary. Instead, ESPN will debut a “30 For 30” special on Delaney Aug. 19. The piece will be a digital short, about 19 minutes long, that will premiere on Grantland.com.

“They really did a great job with the piece,” McGee said. “Even though he died tragically, Joe had already proven a lot of things in his life.”

McGee said they are hoping to receive more funding for the park in the future. Donations can be made by calling the Haughton town hall at (318) 949-9401. Donations will also be accepted through the mail.