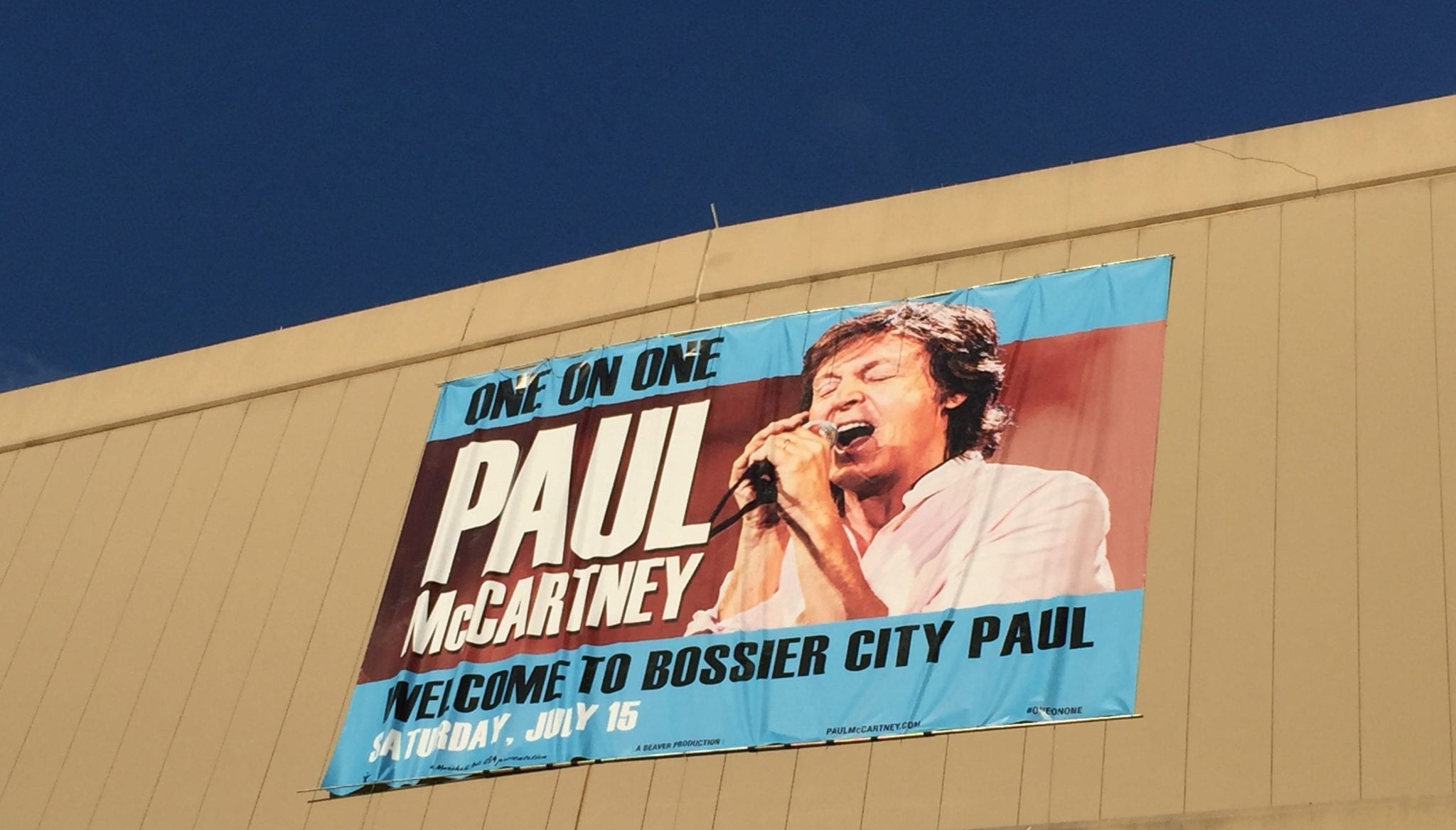 Saturday at the CenturyLink Center in Bossier City, a living legend proved his status by performing for almost three hours straight to a sold out crowd of all ages. Sir Paul McCartney’s stop on his “One on One” tour was a bucket list item for not only myself, but many others.

McCartney showed up and delivered everything I could have imagined and way more. Of course a former member of The Beatles saw several known hits trotted out, but Sir Paul reminded everyone of his prolific career, producing songs throughout his 60-year career.

The veteran rock star kicked things off with “Hard Day’s Night,” a recent addition to his setlist as it hadn’t been played since The Beatles days before this particular tour. He also brought out rousing renditions of other Fab Four hits such as “Can’t Buy Me Love,” “I’ve Got a Feeling,” and “Ob-La-Di, Ob-La-Da.”

But during the course of his massive set, he delved into his back catalogue playing what he referred to as “some old songs, new songs, and some in between.” Some in between meant that classics such as “Temporary Secretary” were going to have a fresh coat of electric paint.

McCartney masterfully managed the concert’s tempo with songs such as “Love Me Do” before bringing things back up with songs such as “Back in the U.S.S.R.” Then, McCartney would jump to the present day and play something such as “FourFiveSeconds,” a song that he recently did with Rihanna and Kanye West.

Somehow, they all worked.

In the downtime between songs, he would engage the audience with a story such as the time he and John Lennon gave the Rolling Stones their first hit single during a conversation in a cab with Mick Jagger and Keith Richards. With these candid tidbits of information, you truly felt like you were having a one on one session with the legend, despite being in an auditorium with thousands of screaming fans.

The “One on One” tour lets McCartney have multiple concerts, each one focusing on certain aspects of the musician’s long career. Seeing animated photos of the Beatles accompanying each song reminded me that this would be the closest I would ever get to being at one of their concerts.

Which brings me to the theatrics — the lighting and picture show attached to the songs was appropriate as it was diverse. There was even a rising platform that emerged during the quiet acoustic performance of “Blackbird.” But it all paled in comparison to the explosive (literally) conclusion of “Live and Let Die” complete with fire and pyrotechnics.

McCartney concluded his main set by bringing it back down to Earth with “Hey Jude” that had more than 14,000 people singing and swaying along together. Of course, there was an encore. And McCartney outdid himself by playing not one, not two, but seven more songs!

By the end, I was left elated and absolutely satisfied as it had lived up to my wildest expectations. I had just seen a genuine performer give his all on stage, make me laugh and tell me behind the scenes stories — reminding us that there is a genuinely good man behind the music who, after six decades, still doesn’t have any plans of slowing down.