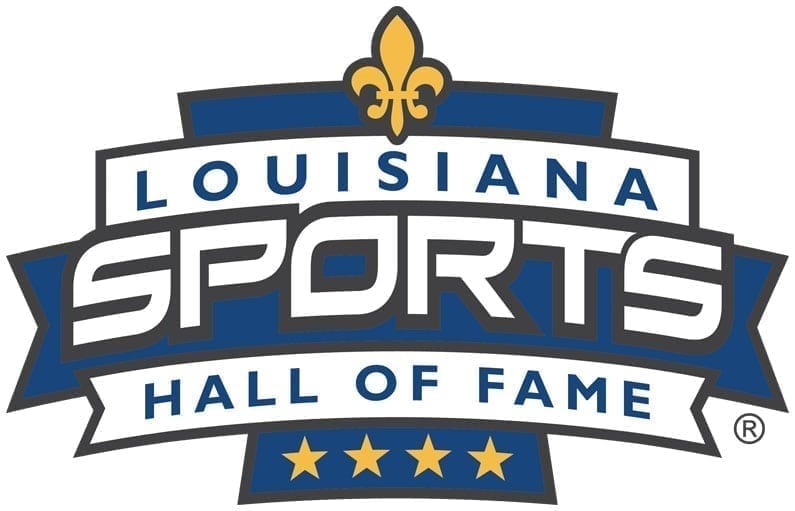 That’s how Indianapolis Colts receiver Reggie Wayne’s wife described Reggie’s face when he received the phone call that he was being inducted into the Louisiana Sports Hall of Fame.

There were plenty of ear-to-ear grins from the nine inductees and three honorees Thursday at the introductory press conference, hosted in the Louisiana Sports Hall of Fame and Northwest Louisiana History Museum and presented by La Capitol.

But Wayne didn’t dream of being a football player. Like many of the 2018 induction class, he wanted to be famous at something else.

“I grew up wanting to be Ozzie Smith, to be a second Wizard,” said Wayne, an aspiring baseball player. “It was my dad (New Orleans high school coach Ralph Wayne) that motivated me to play, and I was doing it to please him.

“But I would see those guys practice at O.P. Walker (High), and I wanted to do something special like that. I always thanked my dad for pushing me like he did.”

That push steered Wayne to 14 NFL seasons – all with the Indianapolis Colts as he caught 69 of his 82 career touchdowns from soon-to-be NFL Hall of Famer and Louisiana native Peyton Manning.

Wayne had to share the football with fellow inductee Brandon Stokley, who played four of his 15 NFL seasons with Wayne in Indianapolis.

Stokley’s heart wasn’t necessarily set on a football career, either.

The Comeaux High alum stopped playing football after his freshman season, figuring his 5-foot-4, 115-pound frame wasn’t suited to be an option quarterback.

But the offense opened up under a new coach, and Stokley thrived as a receiver that eventually led to a Super Bowl win with the Baltimore Ravens in his second year in the league.

“It was hard enough to believe I was in the NFL in the first place, but playing in a Super Bowl was special,” said Stokley, who compiled 5,339 receiving yards and 39 career touchdowns in the NFL. “To have all my family that helped me get there around me after we won, it’s indescribable.

“Going in with this class is very special because Reggie Wayne was my teammate, and he’s one of a kind. And then to be in this class with Lewis Cook (Stokley’s offensive coordinator at UL Lafayette), it just means so much.”

Cook was an assistant at ULL for a total of eight seasons, calling Stokley one of the hardest workers he’s ever coached, adding that present-day kids he coaches still do possess a strong work ethic.

But Cook’s destiny was on the high school football field, and coaching was something he’d wanted to do since elementary school.

The coach credited his 344 wins (and counting), four state titles with two different schools and 23 district championships to an even-keeled temperament.

“I was a middle-of-the-road kind of guy in that I got a fierce competitiveness from my father, but my mother was someone who didn’t let anything bother her,” said Cook, who is fifth all-time on Louisiana’s high school wins list. “I didn’t want to slit my wrists when something bad happened.

“But I also had a lot of coaches on my staff who were a tremendous part of our success. This is not something you do by yourself.”

Nobody makes it to a hallowed hall like Louisiana’s by themselves, but fisherman Jack Hains did excel in an individual sport.

Hains aspired to be a professional baseball player as he competed in childhood games with Cook in Rayne, but his day job as a crop duster allowed him the downtime to develop his fishing passion.

“I realized fairly early that I wasn’t a big-league player, and I knew at that point I’d be a crop duster,” Hains said. “You had a lot of off time as a crop duster, so I hunted and fished a lot. Fishing season never ended.

“There was a guy named Topat Morrow that liked to fish from just before you could see (in the morning) to just after you couldn’t see (at night). So I learned a lot from him because he had trouble finding fishing partners.”

Hains won the 1975 Bassmaster Classic as a rookie and qualified for seven classics. He had 24 top-10 finishes in professional events.

NBA champion Larry Wright called himself “one of the greatest blue gill fishermen in the world,” but it was Wright’s prowess on the hardcourt that his picture in the hall.

The Monroe native is the next Grambling legend to enter the hall after he won a championship with the Washington Bullets (led by Rayville native Elvin Hayes) before redirecting his career to be an Italian and European champion.

Wright said he never wanted to let his teammates down.

“Wes Unseld and those guys had been to two championships and not been able to get it done,” Wright said. “When I got an opportunity to help those guys win, I never ever wanted it to be my fault.

“Wes and I were walking down the streets of Seattle, and Wes told me this: Larry, I’ll do anything short of murder to win this championship. When he made that statement, he looked right at me. I said, ‘Hey Wes, big fella, I’m on your team.’”

Drag racer Paul Candies may have never wanted to harm a teammate, which would have been co-founder (Leonard Hughes) of Candies and Hughes racing, but his son Brett said Paul was an extremely competitive person.

“He has a smile on his face in all of the (program photos), but he wanted nothing more than to stomp his opponent,” said Brett Candies, who with his brother P.B. were representing Paul (died in 2013).

Added P.B., “Paul and a friend built a go-cart in his yard and drove passed a cousin on a back highway, who told (Paul’s dad). Our grandfather grounded our dad, but from that point on, he had to feed his need for speed.”

Pitcher Russ Springer initially used his speed (set the per-nine-innings strikeout record in the Southeastern Conference with 14.5 as a freshman at LSU), but it was the long game that benefited Springer.

He was a set-up reliever for almost all of his 18 major league seasons, playing for 10 different teams. Springer helped three squads to the World Series – the 1999 Atlanta Braves, the 2001 Arizona Diamondbacks and the 2005 Houston Astros.

“I miss the pure feeling of a baseball coming out of my hand,” Springer said via a taped interview. “It’s a kid’s game, and it’s the same game I’ve played since I was eight.

After building UL Lafayette into a top-15 program, he was given “four or five years” to get LSU into the top 10, or else he’d be gone.

“That suited Stanford more and they won. But really with (ULL and LSU), I was in the right place at the time.”

Steve Gleason knows a thing or two about being in the right place at the right time, blocking a kick against the Atlanta Falcons in 2006 – the New Orleans Saints first game in the Superdome after Hurricane Katrina.

But Gleason, the Dave Dixon Louisiana Sports Leadership Award winner, has made even more an impact a champion for ALS research.

Gleason, who was diagnosed with the disease in 2012, started Team Gleason, which raises funds and awareness worldwide.

“When I was diagnosed six years ago, it felt like I was rookie walking into an opponent’s stadium and only hearing the screaming of the crazy and rabid fans.

“My perspective was narrow and my game plan limited … but because of my time in sports, I was taught perseverance in the face of adversity … I plan to continue this fight for decades.”

While Gleason has coined the phrase “no white flags,” symbolizing his refusal to surrender, sports broadcaster Lyn Rollins has made a career delivering a number of catchphrases, or “Lynnisms.”

Rollins and sportswriter Scooter Hobbs are recipients of the distinguished service award, which highlights individuals who’ve made outstanding contributions in sports media.

Rollins, who’s nickname is “Peanut” or “Hot Nuts,” was presented with a 25-pound bag of peanuts.

His 44-year career, which includes being named Louisiana Sportscaster of the Year four times, was spurred by a Zenith radio as a child.

“I would listen to the great baseball voices when I went to bed,” Rollins said. “There was magic coming through that box.

“This is an honor that literally takes your breath away, and I’m just glad I got to talk ahead of Scooter Hobbs.”

Hobbs has entertained American Press readers in Lake Charles and around the state with his stories since 1979.

He started covering LSU as a student in 1978 before landing at the paper covering the Tigers the next year, although he almost didn’t make it.

“I was driving across the Atchafalaya Basin when my car broke down, and I had to hitch-hike the rest of the way there,” Hobbs recalled. “I was a bit beaten down by the trip, and the editor Jim Bean told sports editor Bobby Dower that he didn’t know if me and the dress code would get along.”

Hobbs has around 45 first-place writing awards with 11 writer of the year honors in Louisiana.

All 11 honorees will be officially inducted Saturday night at the Natchitoches Events Center.