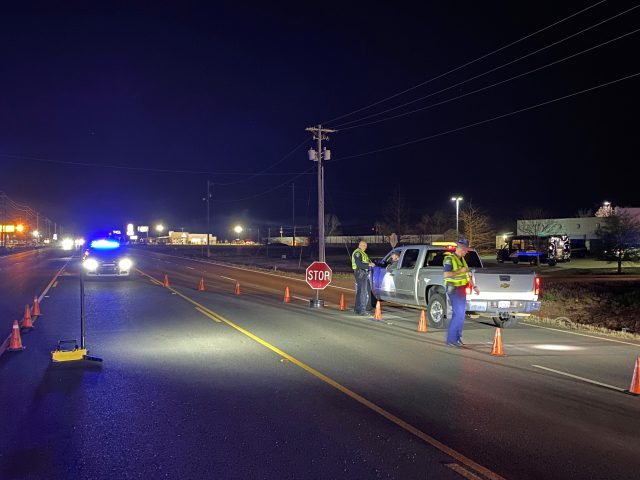 Bossier Sheriff’s Office deputies and other officers screened more than 500 vehicles and made six arrests during a sobriety checkpoint in the 5400 block of Airline Drive on Saturday night into early Sunday morning.

Bossier Sheriff’s deputies and Louisiana State Police Troop G screened 523 vehicles and conducted nine traffic stops during the checkpoint. Six people were arrested for DWI and one was arrested for Simple Possession of Marijuana. Several other drivers were cited for various traffic offenses including no driver’s license, driving without insurance, driving with an open container, driving with a suspended license, and other violations. One of the impaired drivers was stopped for speeding at a frightening speed of 112 mph through a 45-mph residential area.

This sobriety checkpoint was made safer by a gift from NLCOG (North Louisiana Council of Governments) which provided the StreamLight portable scene light, which was used to illuminated the roadway and other safety equipment where deputies and troopers interacted with drivers. Deputy Ryan Rhodes who co-chairs the Impaired Driving Emphasis Program for NLCOG said, “we are thankful for our partnerships with NLCOG and the LHSC (Louisiana Highway Safety Commission). We are grateful for their support of our mission of making Bossier roadways safer.”

This checkpoint was funded through a $14,040 Louisiana Highway Safety Commission impaired driving grant. Motorists are encouraged to report suspected impaired drivers 24 hours a day by calling 911 or the Bossier Sheriff’s Office directly at (318) 965-2203.