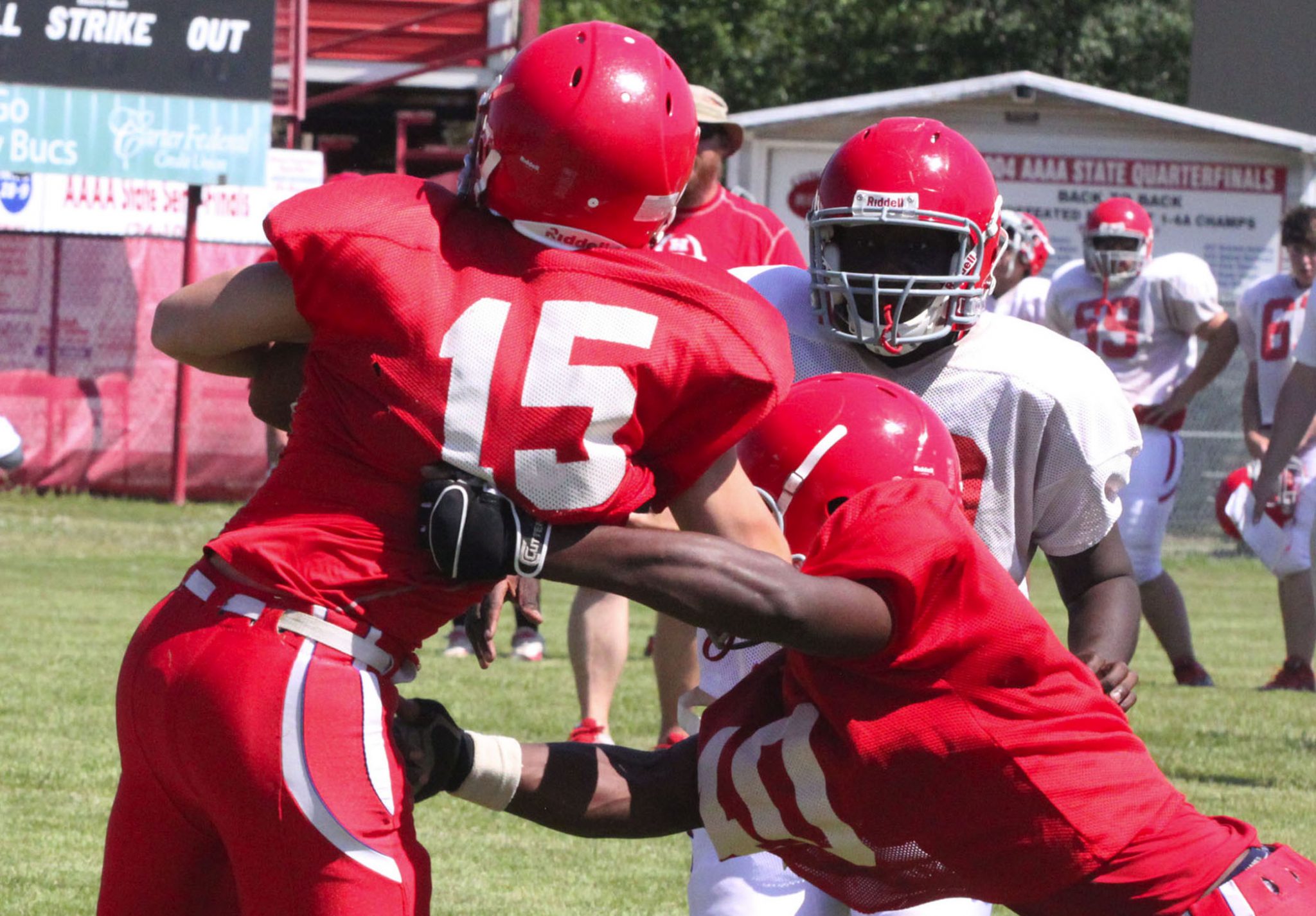 In some ways, it’s been a typical spring football practice for the Haughton Buccaneers.

Like all parish teams, the Bucs have a few holes to fill on offense and defense, and the coaching staff has used the spring to accomplish some of that.

Of course, it’s also been anything but a typical spring in one big respect.  For the first time in 15 years, Haughton head coach Rodney Guin hasn’t been there.

While the Bucs have been going through drills, Guin has been receiving treatment at Baylor University Medical Center after suffering a heart attack on April 26.

“It’s different, not seeing him there every day, but it’s pretty much gone on the way he would want it go,” said assistant coach Jason Brotherton, who has led the team through spring practice.  “All our coaches have been together forever. So nothing really changed as far as what we’re doing.

“Don’t get me wrong, it’s been very different not having him out there with us. But as far as on the field stuff, that’s kind of been the easy part. The hard part has been the other stuff he did that a lot of times none of us saw. We always laughed and said he didn’t do anything, but truth was we didn’t realize all he did until he wasn’t there to do it.”

While Brotherton has been the designated leader in Guin’s absence, he said it’s been a team effort among all the coaches.

One of the things Brotherton and the rest of the Haughton coaches have missed most is Guin’s friendship.

“We’re all real close, good friends,” Brotherton said. “You miss your friend, somebody your see every day and talk to about stuff.”

Guin has been making steady progress.  Brotherton said he talked to Guin Tuesday for the first time since the heart attack.  He wanted to know how the intra-squad game, which was rained out, went.

“He told me to be sure to put it on Hudl so he could watch it,” Brotherton said.

Haughton is coming off a 6-5 season that ended with a 56-55 overtime loss to Ponchatoula in the first round of the playoffs.

Leading the returnees is senior-to-be quarterback Will Haines, who passed for 1,458 yards and ran for 417 last season, and big play wide receiver Javonte Woodard, who caught 38 passes for 671 yards and seven touchdowns.

Other returning players on offense who started or saw a lot of action last year are running back D’Kovin Ware, receiver Hunter Hunsucker and offensive linemen Jamarcia Banks, Kody Cameron and Garrett Malone.

A player to watch not just in the parish but in all of North Louisiana this season will be sophomore-to-be running back Josh Lister, who saw a little action near the near the end of last season. Lister finished third in 5A 100-meter dash at the state meet last Saturday.

“Tons of potential,” Brotherton said. “I don’t think he knows how much potential he has. He’s gifted.”

The Bucs will also have regional champion hurdler Antonio Woodfork, who missed last season, back at wide receiver.

The Bucs, which struggled some on defense in 2013, have a veteran group returning. Among those that started or saw a lot of action last year are backs O’Shun Smith and TJ Sweeney, outside linebacker Duncan Smith, tackle Mason Moreau, end Michael Harris and linebacker JT Bledsoe.

“We’re just getting young people in position,” Brotherton said. “We’ve got some guys that are going to need to play. There’s nothing specific that we have really had to do. With that many starters back, and one being the quarterback, we know what we’re going to do.

“There are a few spots we’ve looked at trying to fill, defensive backs and linebackers and a couple of offensive linemen. For the most of part, we’ve got a lot back that played last year.”