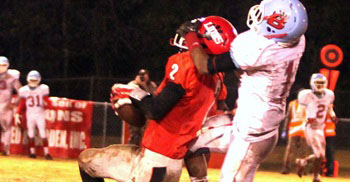 For the first time in two years, the Plain Dealing Lions are going through spring practice without an experienced quarterback.
All-Parish first-team quarterback Logan Allen, who passed for more than 6,000 yards and 62 touchdowns in his career, has graduated. Allen helped the Lions go 9-3 and reach the quarterfinals of the Class 1A playoffs last season for the first time since 1997.
The heir apparent at the position is junior-to-be Kylon Stromile. Needless to say, the position has been a point of focus during spring practice.
“He’s athletic,” head coach Coy Brotherton said. “He kind of reminds me a little bit of Deaumante Johnson a few years back. He’s more of a dual-threat. He can run and throw.
“We’ve kind of tweaked the offense a little bit, kind of roll him out and put him in situations where he can choose to do either one.”
The Lions must also replace first-team All-State wide receiver Isaac Jacobs and running back/receiver Desean Morris.
Plain Dealing does have one of the top athletes in the state returning in receiver Keldrick Carper, who had 268 yards rushing and 755 receiving. Carper was also a first-team All-Parish defensive back.
Derreon Washington has moved from wide receiver to running back.
Determining who the four wide receivers in the Lions’ spread offense will be has been a focus of spring practice, Brotherton said. He is hoping to have that mostly settled when 7-on-7 games begin in June.
Brotherton said it’s possible the Lions will have three seniors at wide receiver.
Two offensive linemen return, Bijan Mitchell and Jarvis Harris.
Mitchell will also play linebacker again. Herbert McCauley also returns at the position. Jared Harris and Ryan Penwell return on the defensive line.
“We’re not going to be young, but we are going to be a little inexperienced in places,” Brotherton said.
Plain Dealing opens the season at Haughton, where Brotherton’s brother Jason is an assistant. They also have a new district opponent, D’Arbonne Woods, a private school in Union Parish that recently joined the LHSAA.