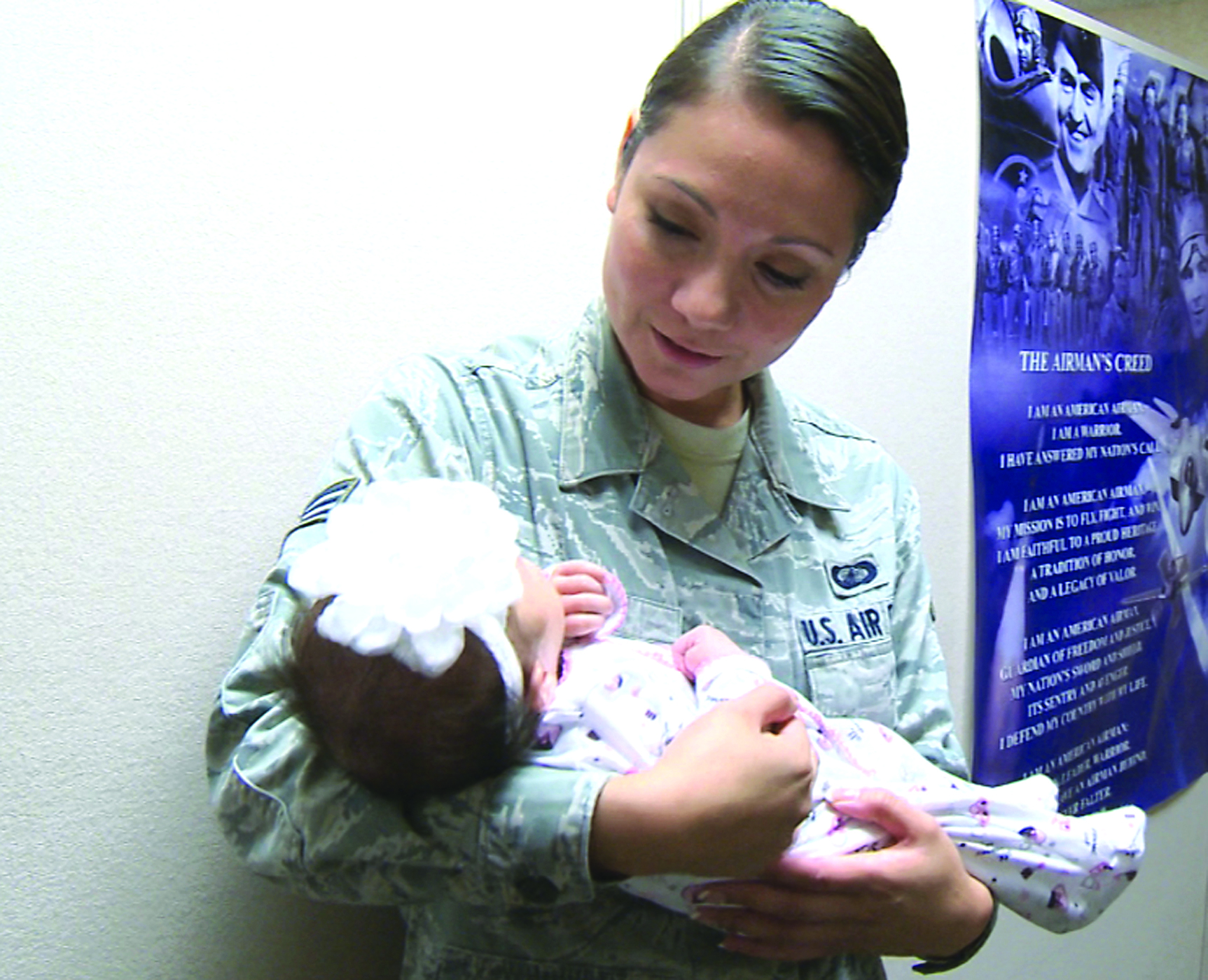 BARKSDALE AIR FORCE BASE — When most Airmen think of wingmanship they imagine helping out a fellow serviceman or woman, but they often overlook that supporting Air Force families is core to the concept as well. One Barksdale unit shows it hasn’t forgotten this critical part of wingmanship.

Despite working late hours for the fiscal year soft closeout, the 2nd Contracting Squadron recently took time out during their busiest season to take care of one of their deployed Airman’s wife and newborn daughter, whom he has yet to meet.

During late-night closeout activities, several Airmen and families worked to collect care package items for Master Sgt. Gary Frank, 2nd CONS commodities flight chief, and invited his wife to include some photos and share a family meal with the team.

This type of relationship with the families of the unit is normal for the 2nd CONS.

“Without reservation, my unit takes care of its families left behind,” said Senior Master Sgt. Charles Jones, 2nd CONS superintendent. “Whether the topic is grocery shopping, pot luck invitations, morale call set-ups, care packages, or responding to emergencies, our deployers rest firmly assured that their families will have support and involvement by their home station Wingmen during any absences.”

While the deployed Airmen from the 2nd CONS may rest assured, their families feel equally cared for.

“It’s been very helpful,” said Ylenia Frank, Sergeant Frank’s wife. “When he left, it felt like I was alone in the whole world by myself. As soon as [the unit] started helping me out, it felt like, oh my gosh! There’s the light!”

That support meant even more when, two months ago, Mrs. Frank went into labor with the family’s newest addition. Fellow 2nd CONS family members helped coordinate contact between Sergeant and Mrs. Frank, which made all the difference in the world to her, since he was on the phone talking her through her contractions.

“I really appreciate all the help,” Mrs. Frank said. “Thank you everyone for supporting us.”

While Mrs. Frank’s delivery is an extreme example, it’s not unique to the unit because of what Jones calls the “2nd CONS Wingmanship Way.”

“Whether professionally or personally, all Airmen must learn to live and endure in a teaming environment,” he said. “It’s only natural that we thrive most in these supportive settings, especially during deployment.”

With end-of-year contract requests and long hours, one might think that some of the non-mission related support would be overlooked. But that’s not the case for the 2nd CONS.

“It should not be any other way or we risk failing to live by our creed,” Jones said. “The support from our family cements our resolve to honor it. This Wingman team concept includes civilians, officers, enlisted and contractors; this team steps up in their appropriate capacity during these times.”

Wingmanship is nothing new to the Air Force, and recent messages from leadership highlight its importance in all forms, be it supporting the uniformed Airmen or their families. Jones’s unit has embraced these messages wholeheartedly.

“This culture is a standard and fully understood by all unit members as unconditional,” he said. “That’s how we handle things in a contracting family.”